Poll: Roughly two-thirds of Americans oppose defunding the police — but a majority of Dems support doing so 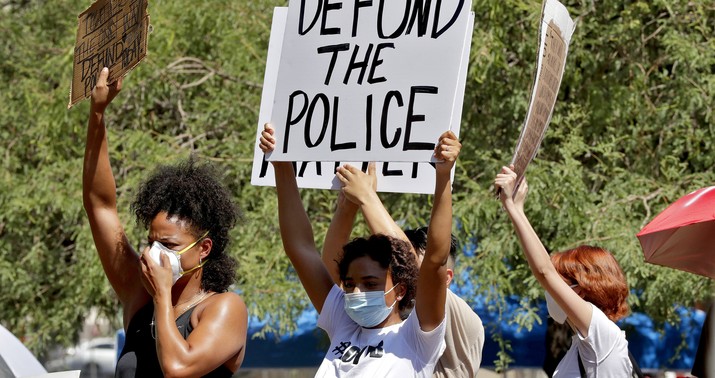 Trump should be tweeting out this poll every hour on the hour. That’s how useful it is to him politically.

If nothing else, it’d give him something to talk about apart from crying over how disrespectful people are to dead Confederates.

There’s a reason Joe Biden, James Clyburn, and various other senior Dems have scrambled to tamp down the “defund the police” talk: It’s bananas, and most Americans recognize it as bananas.

But not most of Biden’s and Clyburn’s own party.

Trump’s been looking for a way to claw back some of the senior citizens who’ve drifted into Biden’s camp over the last few months, right? Well, there it is on a silver platter.

And it says something about Democratic radicalism at the moment that, even with that moderate option available to them as an alternative, 55 percent still said yes to “defunding” the police.

But don’t miss the forest for the trees. HuffPost and YouGov also polled this week on defunding the police: Again, they found Americans strongly opposed and Democrats more or less evenly split. (In this case there were slightly more Dems who opposed the idea than favored it, a split of 41/45.) The salient fact, though, is that defunding the police is the *only* police reform that most of the country opposes. Majorities, in some cases big bipartisan majorities, are willing to support a lot of changes to how the police do business.

Every reform polled apart from defunding the police drew at least plurality support. Ending qualified immunity for officers, a reform already ruled out by Trump, is polling at +32, with nearly 60 percent in favor. These are no fluke results either. A third poll out today, this one from Reuters, also asked Americans how they’re feeling about police reforms and found huge majorities in favor of various proposals. That includes Republicans:

According to the Reuters/Ipsos poll, rank-and-file Republicans appear to be mostly supportive of the proposals Democratic lawmakers in Congress unveiled on June 8. The legislation followed Floyd’s May 25 death in Minneapolis, where a police officer knelt on his neck for nearly nine minutes.

According to the poll, six out 10 Republicans supported a provision that would allow “victims of police misconduct to sue police departments for damages.”

Seven in 10 Republicans support bans on racial profiling and chokeholds. Nine in 10 Republicans agree that police should wear body cameras and the same proportion agreed that law enforcement agencies should be open to independent investigations.

All of this is background for this NYT story about Trump’s disconnect from not just the national mood but the *Republican* mood in the wake of George Floyd’s killing and mass protests. He’s authoritarian by nature; “law and order” is a message he’s very comfortable with, and which may pay big political dividends for him yet depending on how hairy things get in the CHAZ and beyond. Even in normal times, unconditional (or barely conditional) support for the police is a solid bet for a Republican pol to impress his base and win over swing voters. But these aren’t normal times. His hardcore base will back him on whatever but less Trump-devout Republicans are clearly open to reform. Trump either doesn’t grasp that or he can’t bring himself to steer away from his core supporters even when it’s to his benefit to do so.

2) People who voted for Trump in 2016 but are now somewhat skeptical are quite defensive of his record on the economy and even corona.

But they HATE how he handles race. This isn't mild "he should watch what he says a bit more" disagreement. They RECOIL from his divisiveness.

From the Times piece:

Mr. Trump has portrayed protesters as “terrorists” and extremists while praising most law enforcement officers as “great people.” Yet in a Monmouth University poll released last week, 57 percent of Americans — including a majority of white people — said the anger that led to the protests was completely justified. Even among self-described conservatives, 65 percent said the protesters’ frustrations were at least somewhat justified…

What’s remarkable to a number of people across the political spectrum is that Mr. Trump seems to be missing what is all but screaming in neon — clear in everything from the diverse makeup of the protesters to the legions of people sending anti-racist books to the top of best seller lists.

“It wasn’t just black people,” DeJuana Thompson, an Alabama-based activist who just returned home from marching in Minneapolis and Louisville, said of her experience. “This is a clarifying moment for our country, and people are being asked to come out of our comfort zones.”

It wasn’t just black people. Still, “defund the police” is overreach and the “Autonomous Zone” in Seattle is a disaster in the making. Those are gifts to Trump. Whether he can convert them into votes will depend on how much political momentum either idea gets. Senior citizens are watching.

A whole new ad on "@JoeBiden KNEELING TO THE LEFT" from @realDonaldTrump that superimposes Biden kneeling over scenes of looting and fire in the streets. h/t @EwallWice pic.twitter.com/wGrJZFxK5g

'It's a simple yet effective way to display my righteousness': YouTuber's video on why she 'loves wearing a mask' WINS the Internet (watch)