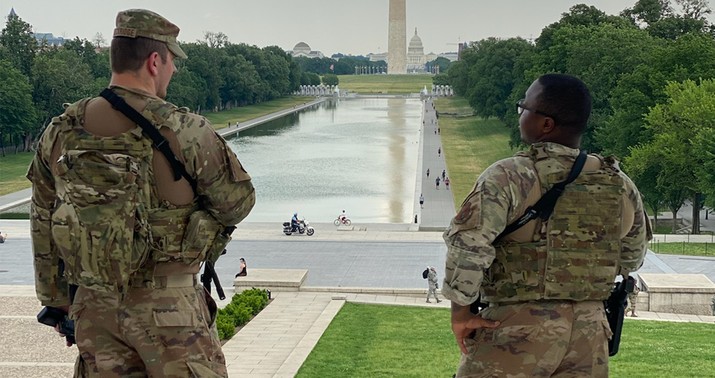 Seems prudent. Washington’s local government was chafing at the troop presence and beginning to show its displeasure with the White House in … creative ways.

The reason this story earns a “wow” in the headline isn’t because it describes a dramatic shift in policy. On the contrary, only a dozen or so Guardsmen deployed in D.C. have been carrying guns so far and those guns weren’t even loaded. They had ammo on their person but not in their weapons.

The “wow” is because Esper is on thin ice with Trump ever since he said earlier this week that he opposes using the Insurrection Act. Esper has been ping-ponging back and forth lately between trying to please the president and trying to please military officers, active and retired, who are creeped out by Trump’s fascination with using regular troops to quell rioting. Within the last five days, Esper referred to U.S. streets as a potential “battlespace” and accompanied Trump on his Bible photo op in front of St. John’s, then backed away from using military force by opposing use of the Insurrection Act, then ordered U.S. troops in D.C. to return to their home bases, then backed away from that order when Trump thought it showed weakness, then finally gave the order again yesterday, and now he’s further de-escalating by ordering all Guardsmen disarmed.

Without Trump’s approval, says WaPo. Why would Esper risk antagonizing the president again when he’s irritated him twice already this week with moves towards de-escalation?

“The whole purpose behind that was a purposeful show of de-escalation,” said one U.S. defense official, speaking on the condition of anonymity to discuss an order that hasn’t been made public yet. “We’re here, but we’re walking things down.”

The White House has not been involved in the decision, a senior administration official said. Trump has encouraged the National Guard to be armed, and wanted them to be as a show of force…

A senior U.S. defense official said Esper communicated the order to the D.C. Guard and other guardsmen earlier in the week through McCarthy and the head of the National Guard, Gen. Joseph L. Lengyel, and confirmed the White House wasn’t involved in the decision. The order affected only about 10 guardsmen who had been out on patrol with firearms that weren’t loaded but with ammunition in their packs, the senior defense official said.

Is he … trying to get fired? If he is, his wish might be granted.

While Mr. Trump’s advisers counseled him not to fire Mr. Esper, the president spent much of the day [Thursday] privately railing about the defense secretary, who along with Gen. Mark A. Milley, the chairman of the Joint Chiefs of Staff, opposed the president’s desire to send regular troops into the nation’s cities.

Mr. Trump has been dismissive of Mr. Esper as weak, according to people who have heard the president speak on the matter, but he told aides that he understands their warnings that he would risk more criticism from military officials if he were to dismiss the defense secretary, fueling a rising revolt among retired officers in the thick of a re-election campaign.

Senate Republicans are encouraging Trump to keep Esper on because they don’t want a confirmation battle over a new defense secretary in an election year, especially amid an argument over deploying American troops against American citizens. Trump sounds inclined for the time being to leave him in place, which is good news for Esper until you remember how unhappy life has been for other cabinet members who fell out of Trump’s favor but were left to linger in their positions. “[I]nstead of being shown an early exit, one person in the administration said” to Politico, “Esper could just face an icing out. It’s a fate that has befallen numerous aides and Cabinet secretaries who cross Trump, from former Attorney General Jeff Sessions, to Secretary of State Rex Tillerson, to national security advisers H.R. McMaster and John Bolton, to every former chief of staff.” Reportedly Trump and Joint Chiefs Chair Mark Milley have a good rapport. Maybe Esper will end up sidelined while Trump conducts military business directly with his top general.

Milley’s relationship with Trump was reportedly one of the things that bugged James Mattis into finally speaking up this week. According to WaPo, Milley once asked Mattis when he was SecDef whether he could approach the president to ask for the job of head of U.S. European Command. Next thing Mattis knew, Trump was nominating Milley to be Joint Chiefs chairman. Mattis reportedly suspects that Milley pulled a fast one on him and went in there to lobby for the Joint Chiefs job instead; Milley has allegedly told allies that he and Trump hit it off and the president offered him the position spontaneously. Supposedly it was the sight of Milley strutting around in camouflage outside the White House this week, after the disgusting spectacle in Lafayette Park, that alarmed Mattis about the military being enlisted to crack down on civilians. It sounds like he doesn’t trust Milley to push back on Trump when it counts. And maybe he shouldn’t: Active-duty officers supposedly told Mattis that “they believed Milley was effectively running the [defense] department by talking to Trump directly and bypassing the secretary, a dynamic that potentially threatened civilian control of the military.”

So maybe Esper isn’t *about* to be sidelined. Maybe he already has been. Although that leaves us to wonder again why he would risk renewing Trump’s wrath by ordering the Guard in D.C. disarmed.

As for Mattis, we may be hearing more from him:

Mattis is still holding back, though. He's privately told friends that Trump's behavior is far worse than the reports & that the republic is on shaky footing. He knows so much more than he's currently divulging.

Now that de-escalation is under way in D.C., it’s worth noting this number. I think Trump ended up in no-man’s land politically in the way he handled the unrest:

He had four options on how to handle the crisis. One: All “healing,” no “strength.” That is, he could have ruled out using the Insurrection Act and focused on trying to broker racial reconciliation and police reform, which would have been, ah, very out of character. Two: All “strength,” no “healing.” Forget any social progress, just send in the troops to go after looters, which would have enraged the left but drawn cheers from the right. Three: “Strength” *and* “healing.” Send in the troops — but also consistently and diligently distinguish peaceful protesters from rioters and work on police-reform legislation and listening sessions with black leaders. Four: Neither “strength” nor “healing.” Skip the social progress — but don’t send in the troops either, despite having spent the week talking tough and freaking out everyone outside the right-wing base with threats of a crackdown. That last option was sure to spook the left while angering the right at his lack of action, leaving no one pleased. That’s the one he chose.

WATCH: Former Trump Chief of Staff John Kelly on Gen. Jim Mattis' comment that @realDonaldTrump is the "the first president in my lifetime who does not try to unite the American people."