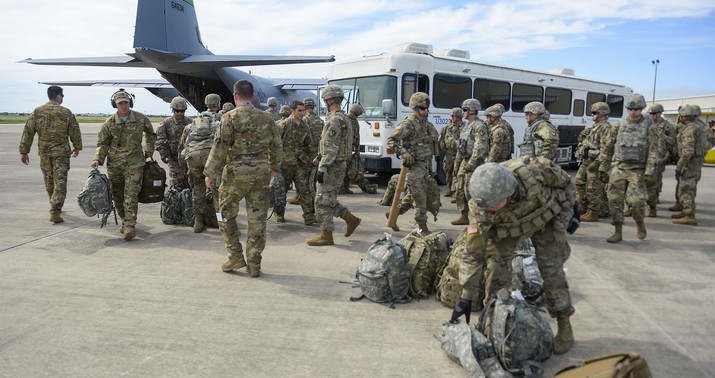 The AP reported earlier that members of the 82nd Airborne would leave Washington this afternoon and return to their home base, with other troops stationed in Virginia and Maryland set to follow if things remain quiet over the next few days. But then this happened and, well, hoo boy.

Ed noted earlier that the White House didn’t take kindly to Esper’s comments this morning about opposing use of the Insurrection Act. So now here’s the SecDef tilting back towards showing “strength”:

Maybe it’s not all on Esper. Axios claimed last night before darkness fell that Trump had already begun backing off invoking the Insurrection Act, with one source alleging that the president “saw and continues to see the act as a mechanism only if governors can’t contain chaos in their states.” An earlier AP story posted this morning agreed, noting that “interest in exerting that extraordinary federal authority appeared to be waning in the White House.” Now, suddenly, the troops in D.C. are staying put. It could be that Trump is reacting to those reports, not wanting it to appear that he’s backing off his willingness to use the military.

I think it was the bipartisan backlash to that repulsive fascist stunt Trump pulled on Monday in Lafayette Park that spooked Esper this morning, as he’s been caught more than once in a tug of war between Trump’s political whims on the one hand and military SOP on the other. There was the episode where Trump insisted on Eddie Gallagher being allowed to retire from the Navy SEALs with his trident pin, which ended up pitting Esper against Navy secretary Richard Spencer. Then came the equally bizarre episode in which Spencer’s successor, Thomas Modly, fired Capt. Brett Crozier for going outside the chain of command in reporting the COVID-19 outbreak on the USS Theodore Roosevelt. Modly declined to wait for a formal Navy investigation; reportedly he acted because Trump felt embarrassed by Crozier’s letter and he was eager to impress the boss, with Esper once again stuck in the middle.

Lots of unorthodox Trump-pleasing politicized behavior lately by the SecDef and his top deputies at the expense of normal military procedure lately, in other words, capped by Esper trotting over to St. John’s church with the president on Monday so he could wave around a Bible and do his Christian warrior photo op. That was a bad look on a day when the president was threatening to send the military into America’s streets to do battle with “terrorists”; Esper himself told America’s governors on a conference call with Trump that afternoon that the Pentagon was prepared to “dominate the battlespace” if deployed, which is an interesting way to describe crowd control amid rioting. Joint Chiefs Chairman Mark Milley was seen in camouflage in the streets of D.C. on Monday night, a sort of military show pony for the president, and a National Guard helicopter (with Red Cross markings, of all things) was filmed flying low over protesters to try to intimidate them into dispersing, a tactic normally used abroad against demonstrators.

It all felt familiar, and not in a good way:

Congrats, America! You have joined the Middle East nations where you cannot peacefully protest outside the presidential palaces. pic.twitter.com/7T03rRMXQO

The caudillo optics seem to have understandably alarmed members of America’s military leadership because soon media outlets were filling up with quotes about unease in and around the Pentagon. Mike Mullen and James Stavridis each penned op-eds politely reminding the military that civilians aren’t the enemy. Others are whispering to the press about their discomfort anonymously:

The anxiety [inside the Pentagon] hit a high point on Monday, when word leaked out that Defense Secretary Mark Esper referred to cities undergoing protests as a “battlespace,” and as Esper and Joint Chiefs Chair Gen. Mark Milley walked with Trump across the street from the White House after protesters were cleared from Lafayette Square in advance of a staged photo op in front of St. John’s Episcopal Church…

“There is growing concern that this is not good for the role of the military going forward,” the official said. “Now you’ve injected the military into a moment in a political way. It just doesn’t seem right.”…

A fourth defense official who was not authorized to speak publicly said there has been a significant level of consternation among Pentagon officials over the past day that Milley wasn’t more attuned to how his presence could send the wrong message — and muddle the military’s hard-fought reputation as being above the political fray.

Sources at the Pentagon assured the Daily Beast that it’s the White House, not them, that wants a face-off between soldiers and looters:

These Pentagon officials added that it was the White House, not the Defense Department, that was pushing for active military might in the streets. A senior DOD official said it was the White House that requested military helicopters fly low over protesters in D.C. and that it was part of a broader request from the Trump team that the national guard ramp up its presence in the city. The Associated Press was the first to report about the military flyover being connected to a request from President Trump.

Additionally, the president has pressed aides and Pentagon officials for graphic details on the kind of armored vehicles, military units, aircraft, and even “tanks” that they could potentially send to maintain order in U.S. areas rocked by protests and rioting, according to two people familiar with recent discussions.

One of the sources, a senior administration official, insisted that the president wasn’t ordering tanks to roll down the streets, but was inquiring about “the kind of hardware” that could be used in military shows of force, and at one point Trump threw out the word “tanks.”

Go figure that the military doesn’t want to be used as a prop in some sort of martial-law pageant that Trump thinks will make him look “strong” ahead of November. Ironically, if he had been more low-key about his strongman fascination with pitting troops against citizens he might have encountered less resistance to the idea from politicians and military leaders. “[A]t least three governors of states experiencing large-scale protests contacted the Trump administration requesting that it not push them to accept active military personnel, claiming it would only inflame tensions on the ground,” the Daily Beast reported. CNN claims that National Guard troops were initially expected to be sent to D.C. from New York, Delaware, and Virginia — but all three deployments were canceled by the relevant governors, probably because they realized that Trump wanted them for what was essentially a big show of his own power. Reportedly it wasn’t the mayor of D.C. who requested the troops; a Virginia official tells CNN they would have been under Bill Barr’s command as AG. “The call with governors made it clear that the President was interested in escalating the situation and the governor did not think that was responsible,” he said.

Put it all together and there was no upside and much downside for the military in being roped into this mess. They’re not trained in law enforcement; an ugly incident involving looters and/or protesters caught in the crossfire would have cost them public legitimacy; and Trump’s obsession on meeting the moment with force, right down to his own backyard in Lafayette Park, would have branded the military as essentially “Trump’s troops” if they had been deployed to American streets, especially over the objection of the local state governor. On top of everything else, if you had to bet right now you’d bet that Democrats will control more of the government next year than they do this year and there might be payback for “Trump’s troops” in the Pentagon brass from the ruling party. (Senate Dems are already issuing warnings.) I bet Esper got an earful about all of that, certainly publicly and probably privately, which is why he started backpedaling about the Insurrection Act this morning. But then he probably got an earful from Trump and decided he needed to appease him. Voila — the troops are staying in D.C. for another day, whether they’re needed or not.

Update: Speaking of caudillo optics, why would we need U.S. troops in the streets when we can have heavily armed unidentified government agents instead?

5PM WHITE HOUSE — These are the unidentified DOJ officers holding the perimeter at 15th and H Streets.
They won’t tell the public to whom they report exactly…
It’s generating HUGE frustration here #GeorgeFloyd @WUSA9 pic.twitter.com/GOSbeyplLb