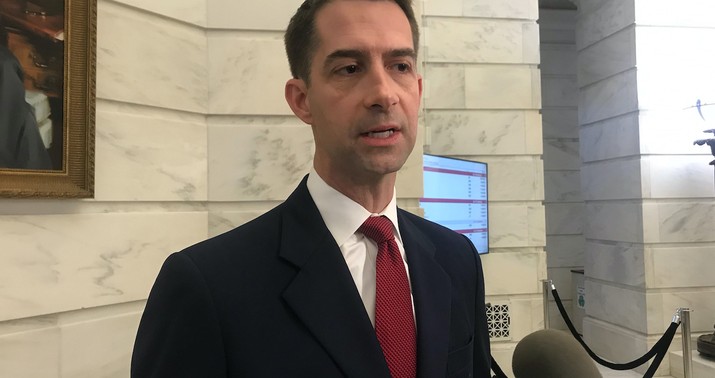 This same paper has run op-eds by Putin, Nicolas Maduro, and members of the Taliban, among others, with little or no pushback from its reporters.

Defensibly, I should add. Sometimes it’s worth publicizing loathsome views because it’s in the public’s interest to know how a figure with influence over U.S. or world affairs is thinking. And sometimes it isn’t: You’re not going to see any “The Holocaust Never Happened” or “Three Cheers for Derek Chauvin!” op-eds in the Times even if the author is Khamenei or some racist American politician.

There’s no hard and fast rule I’m aware of to guide how a newspaper, or blog, should handle a dilemma like that. Sometimes the author is sufficiently prominent and the subject matter sufficiently pertinent that you run it for that reason alone; sometimes the view expressed is so fringe and contemptible that you pass on it, irrespective of authorship, rather than give it oxygen. A publication is entitled to assert its values in what it chooses not to publish, not only in what it does

I don’t think this case was a close call, though. Of course you publish Cotton’s op-ed.

NYT reporters in a rare open revolt over the opinion side running Tom Cotton’s op-Ed calling to deploy the military to “restore order.” pic.twitter.com/MgLuR8EunJ

I’ll probably get in trouble for this, but to not say something would be immoral. As a black woman, as a journalist, as an American, I am deeply ashamed that we ran this. https://t.co/lU1KmhH2zH

THREAD: As a former @nytimes Op-Ed editor I am reluctant to weigh in on my alma mater. But the decision to publish @SenTomCotton calling for troop deployments to quell unrest falls short of sound journalistic practice. pic.twitter.com/SgXSndkq8l

“Among those tweeting in solidarity [against running the piece] were a diverse swath of editorial and production staffers, including restaurant critics, art and graphics producers, travel, style and culture reporters, tech writers, and Times opinion writers like Roxane Gay,” notes the Daily Beast. The editor of the op-ed page, James Bennet, defended the decision to publish it — although given the way these things normally go, both he and Dean Baquet will probably be delivering groveling apologies to the newsroom before the day is out.

The Times editorial board has forcefully defended the protests as patriotic and criticized the use of force, saying earlier today that police too often have “responded with more violence — against protesters, journalists and bystanders.” https://t.co/XdjnhuAVax

As part of our explorations of these issues, Times Opinion has published powerful arguments supporting protests, advocating fundamental change and criticizing police abuses.https://t.co/B2KZ6qYbQqhttps://t.co/kBoxPSm8Cqhttps://t.co/ZDT6yG0wgvhttps://t.co/aFHsW4juf9

We understand that many readers find Senator Cotton's argument painful, even dangerous. We believe that is one reason it requires public scrutiny and debate.

For me Cotton’s piece easily passes the “beyond the pale” test that would rule out publication. He’s a U.S. senator, a possible future defense secretary, and a certain candidate for president in 2024. His view matters, maybe a lot. What he’s endorsing, invoking the Insurrection Act, is lawful. And a recent poll shows that the public supports using the military to help police quell rioting, 58/30. The Times’s newsroom may not like that it’s a mainstream view — I’m not thrilled about it myself — but it’s a mainstream view.

In those circumstances one would think a group of professional writers and nominal free-speech advocates would favor demanding that a rebuttal op-ed, possibly by an esteemed retired military officer like James Mattis, be published instead of resorting to “speech = violence” sophistry about Cotton’s op-ed placing black Americans in danger. But this is the journalist class we have.

Remember 6 years ago when conservatives would point at the censorious college PC woke leftists and say "LOL, those kids are in for a rude awakening they enter the real world."

That was always wrong. It was the rest of us who needed to brace for them. https://t.co/iaLpFowZif

There’s no shortage of points to make against invoking the Insurrection Act. For starters, no governor has requested it, which distinguishes Trump’s and Cotton’s interest in it from Bush 41’s invocation of it in 1992. There’s also no reason right now that I’m aware of to believe local police and the National Guard lack the manpower they need to suppress looting. Sending regular troops into the streets would risk serious civic costs too. Some peaceful protesters might end up dead in the chaos; parts of the population might come to view the military as hostile to them or their cause for justice for George Floyd and an end to police brutality. There’s a reason why so many retired brass seem creeped out this week about the prospect of troops being deployed, from Mattis to Mullen to Stavridis to, most recently, John Allen. Trump and Cotton see “strength” and “law and order” in invoking the Insurrection Act whereas Mattis et al. see a poisoning of civil-military relations. From Allen’s new piece:

Second, Trump was clear he views those engaged in the unrest and criminal acts in these riots as terrorists, an enemy. He said so, ostensibly as justification to deploy the U.S. military to apply federal force—his “personal” force—against the riots. Indeed, the secretary of defense used the military term “battlespace” to describe American cities…

[T]he governors have sufficient law enforcement capacity—and, if necessary, the combat power of the National Guard—to handle their respective crises. If not, they can ask for federal assistance. There is no precedent in modern U.S. history for a president to wield federal troops in a state or municipality over the objections of the respective governor. Right now, the last thing the country needs—and, frankly, the U.S. military needs—is the appearance of U.S. soldiers carrying out the president’s intent by descending on American citizens. This could wreck the high regard Americans have for their military, and much more.

Allen was especially galled by the spectacle on Monday of cops clearing Lafayette Park of protesters so that Trump could trudge across the street for his Bible photo op in front of the church. (“The slide of the United States into illiberalism may well have begun on June 1, 2020. Remember the date. It may well signal the beginning of the end of the American experiment.”) That’s the punchline to Cotton’s demand in his op-ed for “an overwhelming show of force to disperse, detain and ultimately deter lawbreakers.” The Lafayette Park incident proved that when Trump and Bill Barr want to show “strength,” they don’t discriminate between “lawbreakers” and regular protesters. Why should anyone trust them to strictly observe that distinction when deploying U.S. troops against American citizens when they couldn’t do it in their own backyard three days ago?

Even Mark Milley, the chairman of the Joint Chief of Staff, who’s been enlisted in Trump’s law-and-order pageant, felt obliged to put out a memo last night reminding his top deputies that they answer to the Constitution and the American people first and foremost.

This memo is fascinating. The text — a direct reminder that soldiers' highest loyalty is to the Constitution — is less interesting than the subtext, that the reminder is deemed vitally necessary at this moment: pic.twitter.com/9l9awUNaZD

If America’s top military officer senses there’s momentarily enough doubt about to whom the military ultimately owes loyalty that he has to reiterate basic civics in a memo, I’d say that’s a bad moment to invoke the ol’ Insurrection Act.

Grumpy Times staffers should look on the bright side: That op-ed may have done Cotton more harm than good politically. I’m less likely to vote for him in 2024 now than I was before he published it. I’m sure some independents feel the same way. Maybe we’re in a minority, per the polling, or maybe as the rioting burns out more people will come around to the view in hindsight that sending in the troops would have been a dangerous overreaction. Sunshine is the best disinfectant.