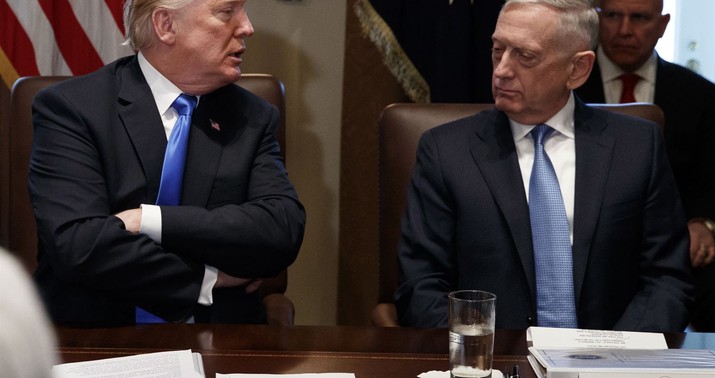 Trump critics have been after him for years to speak up forcefully against his former boss, but he wouldn’t budge. Until now.

Which makes me a little nervous.

I don’t think he would do this just to do it, having held out for so long. I don’t think he has an electoral aim. If he wanted to lend Biden a hand, he would have waited until October for maximum impact.

What makes me nervous is the possibility that he felt he *had* to speak up because he’s worried about what Trump might try to do with the military at a moment of national crisis, amid excited chatter about using the Insurrection Act. Tom Cotton, who’s clearly angling for the GOP nomination in 2024 and possibly Mark Esper’s job right now, has an op-ed in the Times today entitled “Send in the Troops.” Tucker Carlson has all but called Trump a pussy on Fox News for not sending in soldiers to start cracking heads. The hardcore nationalists really want to see Strength, red in tooth and claw, applied to American citizens here. They’re egging him on.

If Mattis is piping up now, it makes me think he’s legit concerned that Trump will do it — and legit concerned about how the military will act. What he, and Mike Mullen, and James Stavridis, are doing by suddenly cranking out op-eds denouncing him are using their legitimacy as respected former military brass to offer a counterweight of authority to the troops with respect to whatever Trump might do. I didn’t think in my lifetime we’d have the president and former military figures at the highest levels playing tug-of-war over whether American soldiers should carry out operations against Americans, but here we are.

When I joined the military, some 50 years ago, I swore an oath to support and defend the Constitution. Never did I dream that troops taking that same oath would be ordered under any circumstance to violate the Constitutional rights of their fellow citizens—much less to provide a bizarre photo op for the elected commander-in-chief, with military leadership standing alongside.

We must reject any thinking of our cities as a “battlespace” that our uniformed military is called upon to “dominate.” At home, we should use our military only when requested to do so, on very rare occasions, by state governors. Militarizing our response, as we witnessed in Washington, D.C., sets up a conflict—a false conflict—between the military and civilian society. It erodes the moral ground that ensures a trusted bond between men and women in uniform and the society they are sworn to protect, and of which they themselves are a part. Keeping public order rests with civilian state and local leaders who best understand their communities and are answerable to them…

Donald Trump is the first president in my lifetime who does not try to unite the American people—does not even pretend to try. Instead he tries to divide us. We are witnessing the consequences of three years of this deliberate effort. We are witnessing the consequences of three years without mature leadership. We can unite without him, drawing on the strengths inherent in our civil society. This will not be easy, as the past few days have shown, but we owe it to our fellow citizens; to past generations that bled to defend our promise; and to our children.

You can read it all here. “We must not be distracted by a small number of lawbreakers,” he says of the protesters’ righteous demand for equal justice from the police. “We know that we are better than the abuse of executive authority that we witnessed in Lafayette Park,” he adds later. It can’t be overestimated how much that stunt on Monday set him and Mullen and Stavridis and 10,000 other officers off, I bet. It was the crassest fascist spectacle of Trump’s presidency. If all he’d done is walk across a quiet street to wave a book he’s never read in front of St. John’s church, that would have been crass too but only slightly more so than standard cynical religious pandering. Sending in the goon squad to clear out protesters from a public park where they had a right to be and then to punctuating it with a bit of Bible-waving was such a crude display of strongman authoritarianism that I bet even Putin winced at it for being lowbrow.

Mattis knows a fascist display when he sees one and he knows what’ll happen if it isn’t deemed beyond the pale by authority figures. He understands and values the civic culture of his country. Trump doesn’t, which is one of the most persistently strange things about him. He’s in his 70s, born and raised in the United States, a sworn nationalist known to physically hug the flag at events, yet his approach to power is roughly what you’d expect if you took an Egyptian policeman under Mubarak and suddenly made him president. “How can I enrich myself?” “How can I look strong?” “Let’s send the police into a public square to remove the people so that I can wave my religious book around for the cameras.”

But what’s really worrisome is that we on the right can do worse, and we likely will in time. Watching Cotton salivate at the thought of U.S. troops giving “no quarter” to looters, I had the thought on Monday that I’d rather be governed by Trump than him. Same goes for Tucker. Trump talks tough but usually backs down; he’s not an ideologue, he’s a showman. As Ross Douthat said in a column a few weeks ago, he seems to crave power less because he has some burning desire on how to use it (trade war excepted) than because it brings him attention. Other ambitious Republican politicians have different ambitions and will respond differently to incentives than Trump does. If there’s a demand among the electorate for soldiers to crack the heads of the bad guys here at home, someone will be willing to meet it. Probably not Trump — but Mattis, who knows him and worked closely with him for two years, seems uncertain.

Which, as I say, makes me nervous.