Obama: Let’s not excuse violence, or rationalize it, or participate in it 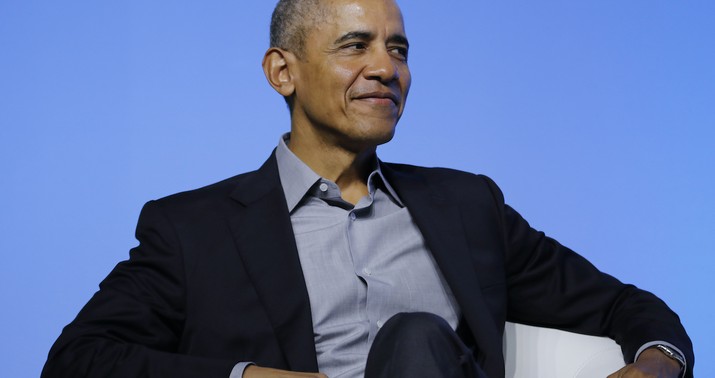 This plea would have a longer cultural reach delivered on television instead of in a Medium post, but it’s welcome regardless coming from the most influential person in the Democratic Party. Plus, I think he’s in a tight spot politically that prevents him from charging into the debate via a big TV appearance.

First, the waves of protests across the country represent a genuine and legitimate frustration over a decades-long failure to reform police practices and the broader criminal justice system in the United States. The overwhelming majority of participants have been peaceful, courageous, responsible, and inspiring. They deserve our respect and support, not condemnation — something that police in cities like Camden and Flint have commendably understood.

On the other hand, the small minority of folks who’ve resorted to violence in various forms, whether out of genuine anger or mere opportunism, are putting innocent people at risk, compounding the destruction of neighborhoods that are often already short on services and investment and detracting from the larger cause. I saw an elderly black woman being interviewed today in tears because the only grocery store in her neighborhood had been trashed. If history is any guide, that store may take years to come back. So let’s not excuse violence, or rationalize it, or participate in it. If we want our criminal justice system, and American society at large, to operate on a higher ethical code, then we have to model that code ourselves.

Obama has two problems in trying to enter the fray here, one from the left and one from the right, and they’re problems that will recur until November 3. On the right, he knows how much Republicans dislike him and how eager Trump is to use him as a foil. If he becomes publicly identified with the protesters, George Floyd’s death and the larger issue of police brutality will become more of a partisan “us and them” thing — which they aren’t right now, according to the polls. Seventy-eight percent of Americans believe Derek Chauvin should have been arrested for killing Floyd, including 68 percent of Republicans. The more O wades into this, though, the more that solidarity will be distorted by instincts towards negative partisanship.

He has a problem on the left too. He doesn’t want to overshadow Biden — and it would be really easy to overshadow a Democrat as generic as Biden. Biden and the Democrats are scrambling to seize opportunities to build his stature contrasting him behaving “presidentially” with Trump behaving … Trumpishly. One example came last week on Memorial Day when Biden finally emerged from his basement to pay his respects to fallen troops and made sure to wear a mask while doing it, even switching his Twitter profile picture to one of him with the mask on. This week, as Trump laid low amid the chaos following Floyd’s death, Team Joe saw another chance to elevate himself at POTUS’s expense. Biden went out yesterday to meet with protesters and today he’s doing the sort of roundtable events with local leaders that the president would normally do:

We are a nation in pain right now, but we must not allow this pain to destroy us.

As President, I will help lead this conversation — and more importantly, I will listen, just as I did today visiting the site of last night's protests in Wilmington. pic.twitter.com/0h2ApbKT0C

If Trump insists on avoiding public displays of conciliatory leadership during the crisis, Biden will happily play shadow president in his absence to heighten the contrast:

To anyone worried that Trump is AWOL as America implodes, rest assured: I'm told he's tracking down some very promising Joe Scarborough leads.

.@CharlieBakerMA, growing emotional in criticizing Trump directly. Amid these times, "He is simply nowhere to be found."

The more Obama’s out there, the more it seems like he’s still the leader of the Democratic Party. Biden can’t build stature vis-a-vis Trump if O’s inadvertently reminding voters of who Biden’s last boss was.

Why was Trump AWOL for most of the weekend, until this afternoon’s Rose Garden appearance? Answer: Because he’s a tribalist by nature at a moment when most voters want leaders to encourage unity. If he starts calling for unity it’ll seem insincere; it’s not who he is and he never makes much of a pretense of believing the things he’s saying when he reads a “traditional” unifying presidential address. But if he indulges his instincts towards “us and them” tribalism, voters might recoil and punish him for making a bad situation worse. So he and his advisors were stuck, until he went all-in on tough-guy posturing this afternoon. He doesn’t want to be too vocal about getting tough with people out in the streets but he doesn’t want to be conciliatory because, well, that’s not him and it’s not his base.

On the one hand, some top aides – including CoS Mark Meadows – believe Trump should deliver a formal address to the nation arguing it would offer him a chance to unify the country. Other aides – including Kushner – believe it wouldn’t be helpful, sources tell me & @Santucci https://t.co/eVemwYDooh

There’s chatter about holding “listening sessions” with black leaders in addition to a public address like today’s remarks. The more Biden attempts to seize the moment, the more Trump will feel obliged to make a gesture of leadership, however half-heartedly, to counter him. But you never know — doing nothing is still very much an option.

Trump and some of his advisers calculated that he should not speak to the nation because he had nothing new to say and had no tangible policy or action to announce yet, according to a senior administration official. Evidently not feeling an urgent motivation Sunday to try to bring people together, he stayed silent…

“The rioting in the streets has put an exclamation point on what this president cannot do: To bring people around and say we are all in this together,” said Tom Rath, a longtime Republican official and former attorney general in New Hampshire. “On his automatic transmission, there is one speed. It is not conciliate. It is not comfort. It is not forge consensus. It is attack. And the frustration right now is that nobody is in charge. Anarchy rules.”

Aides have started leaking that they didn’t like his “when the looting starts, the shooting starts” tweet of a few days ago, with one telling Axios that it was his worst moment since his Charlottesville comments. Much thought is reportedly being given to what effect a show of presidential strength against looters would have on suburban women, a voting bloc that helped hand the House to Democrats in 2018 and which Trump is desperate to make inroads with before November. Would a law-and-order response to the riots win over upper-middle-class women from Biden? Or would Trump’s recurring problem with striking the wrong “tone” continue to alienate them?

But I don’t know. His fascination with sending in the troops to face off with looters and, inevitably, some peaceful protesters who end up in the crossfire seems to be growing.

Here’s the mayor of Atlanta over the weekend encouraging him not to talk at all.