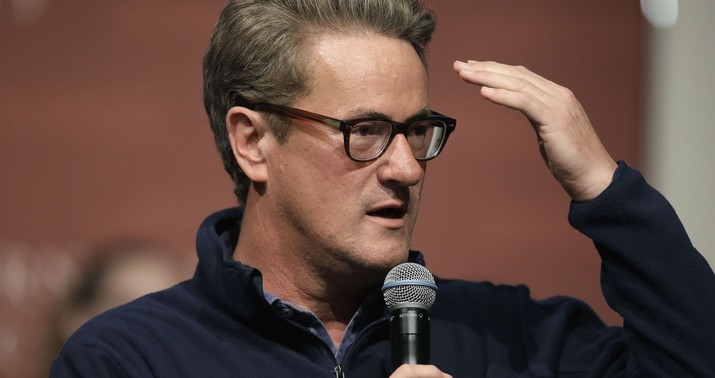 The subject came up at today’s White House briefing via a “question” from One America News, which sounded less like an actual question and more like a White-House-scripted talking point presented in the form of a question. Wouldn’t Trump totally destroy Scarborough on discovery if he dared file a lawsuit over his Lori Klausutis smears?

Q: Would Trump welcome a defamation suit from Joe Scarborough?

McENANY: I would refer you back to my previous comments that the audio from the Don Imus show is disturbing — there is a lot of laughing & joking about this matter that is certainly not a laughing & joking matter pic.twitter.com/uSoffMh5bT

Mika Brzezinski has used the term “libel” recently in describing Trump’s tweets. Today, in an op-ed at the Times, law prof Peter Schuck argues that Scarborough really might win if he took Trump to court even though he’s clearly a public figure for purposes of defamation law:

After all, the president’s innuendo that Mr. Scarborough may have murdered Lori Klausutis — presumably credible to the many Trump Twitter followers who subscribe to conspiracy theories — may seriously harm Mr. Scarborough’s reputation with them and others.

Mr. Trump, moreover, often aims his tweets to lead multiple news cycles affecting well beyond his Twitter followers. The president will surely argue that he has not actually accused anyone of murder and was merely “raising questions.” But courts have held that such calculated innuendo can constitute defamation, depending on the facts. This would be for a jury to decide.

Mr. Scarborough, as a public figure in his own right, must satisfy the Supreme Court’s demanding test for defamation liability in its landmark New York Times v. Sullivan decision. Under this test — designed to free public debate from being unduly constrained by fear of legal liability — Mr. Scarborough must prove that Mr. Trump made his defamatory comment either with actual knowledge that it was false or with “reckless disregard” for whether it was true or false. But the president’s tweets about the Klausutis case probably satisfy this test. After all, he has not cited any evidence to support his calumny either before the tweets or in response to the backlash since then. If the jury found for Mr. Scarborough, it could require Mr. Trump to pay substantial punitive damages in addition to compensation for his reputational harm.

Every now and then I remember that Trump has called for loosening libel laws, which he thinks would make it easier for him to sue media outlets but in reality would lead him straight into bankruptcy as aggrieved plaintiffs cleaned him out for the smears he’s pushed over the years.

Anyway, Schuck’s point is fair. Normally public figures don’t bother filing libel suits because it’s unlikely they’ll meet the Sullivan standard. If you’re famous and a paper damages your reputation by publishing something false about you, it’s not enough to show that they were sloppy in their reporting. You have to show either that they lied about you deliberately or that they were so sloppy that their conduct amounts to indifference as to whether what they claimed was true or not. Reporters, even bad reporters, follow a certain professional ethic so that’s hard to prove. But Trump doesn’t follow any ethic (in any aspect of life, really). At a minimum he’s indifferent to whether the claim he’s making about Scarborough and Klausutis is true. More likely is that he’s heard or read that the medical examiner ruled Klausutis’s death an accident many years ago but insists on malevolently suggesting it was foul play in order to wound his enemy, Morning Joe.

Actual malice, they call it. Pay the man.

Are there non-legal reasons why Scarborough might not want to sue, though? The “Streisand effect” is always a factor in defamation cases, but less so in this one given the prominence of the defendant. Typically a public figure won’t bother to sue a newspaper that’s defamed him because most of the public hasn’t seen the defamation and the lawsuit would have the effect of inadvertently publicizing it. In this case, Trump is the most famous person in the world, smearing Scarborough repeatedly to a global audience. Mass media is already covering it. Even news outlets that would normally side with Trump reflexively in a political dispute, like the Wall Street Journal, have said that Trump is in the wrong. The risk of a Streisand effect is unusually low.

Same goes for death threats, another cost of doing business when clashing with a political leader with a cult following in 2020. Those will increase if Scarborough files suit but doubtless he’s getting them already and is taking precautions. Meanwhile, although OAN’s right about Trump’s lawyers getting to depose him, his lawyers would get to depose Trump as well — which Scarborough, being a relentless Trump critic, might relish in an election year. He’s tried to do things the easy way, appealing to Twitter to delete Trump’s tweets as violations of their terms of service. They refused, and Trump won’t drop the subject. “I have no choice but to sue,” he might tell himself.

I’d like to hear more from legal eagles, though, about where the line is constitutionally on the sort of innuendo Trump has engaged in about Scarborough. He knows enough about defamation law to have avoided flatly asserting that Scarborough murdered Klausutis, but his insinuation is perfectly clear. (“Isn’t it obvious?”)

When will they open a Cold Case on the Psycho Joe Scarborough matter in Florida. Did he get away with murder? Some people think so. Why did he leave Congress so quietly and quickly? Isn’t it obvious? What’s happening now? A total nut job!

….about whether or not Joe could have done such a horrible thing? Maybe or maybe not, but I find Joe to be a total Nut Job, and I knew him well, far better than most. So many unanswered & obvious questions, but I won’t bring them up now! Law enforcement eventually will?

Are those actionable false statements of fact, that Scarborough is guilty of murder, or merely assertions that the matter should be investigated? My hunch is that courts are sufficiently chilly to the idea of public figures filing defamation suits that they’d give Trump the benefit of the doubt on what he meant there, even though it’s clear what he wants to imply. And that may be enough for Scarborough to opt against suing. If he sued and lost, Trump would never stop crowing about it and rubbing it in. It’d be like losing a lawsuit to Eric Cartman, and might have the pernicious effect of convincing low-information voters that Trump was right, that the court found that Scarborough probably did murder Klausutis. (Which of course isn’t at all what a defamation verdict for the defendant would mean.)

Plus, if anything, victory would goad Trump into tweeting about Scarborough and Klausutis even more. That’s how trolls behave.

Although, given Morning Joe’s desire to see Trump lose this fall, maybe that’s reason enough for him to sue. Trump only hurts himself by obsessing publicly about this stuff during the coronavirus epidemic and economic downturn. If Scarborough’s willing to put up with it for a few more months, giving the president a reason to keep talking about it would be a small favor he could do to Biden and the Democrats.

By the way, Schuck also makes the case in his op-ed that Klausutis’s widower, who wrote to Twitter a few days ago asking them to remove Trump’s tweets, potentially has a valid tort claim against Trump as well. It’s not defamation in his case but intentional infliction of emotional distress. I doubt that Klausutis is as personally well fortified as Scarborough for months of battle with Trump and all that comes with it, though. And IIED is a bit of a crapshoot legally, as the jury needs to find the defendant’s conduct really, really outrageous. Since Scarborough, not Lori Klausutis, is the villain in Trump’s tweet-smears, would his behavior clear that bar in suit filed by Mr. Klausutis? Seems like a lot of grief with only an iffy chance of compensation.