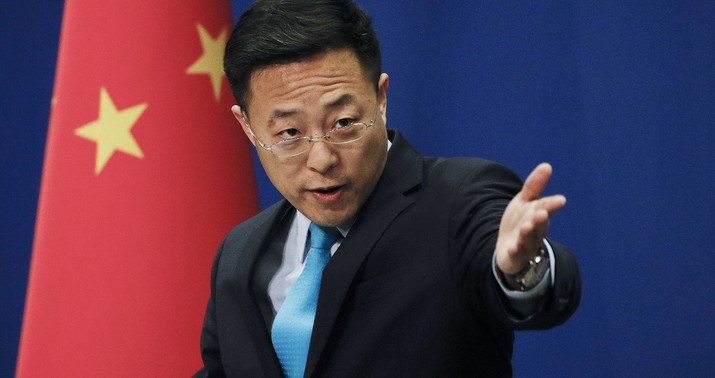 The New York Post is taking credit for goading them into doing this, which would be amazing if true.

How did Twitter not come up with the idea on its own to pair its fact-checking of Trump with a little fact-checking of some MAGA enemies? That would have blunted the criticism that they had it in for the president specifically. And it would have convinced some critics out of the gate that their dubious new feature may have virtues after all. If Twitter’s going to ding the ChiComs for spreading malevolent misinformation with geopolitical consequences every time it dings Trump for pushing misinformation about mail-in ballots, maybe that’s a trade worth making.

But no, according to the Post, it took a little well-aimed whataboutism by its reporters to give Twitter the bright idea that more fact-checking might be their way out of the frying pan for now. Even if it’s destined to land them in the fire later by creating unrealistic expectations among users of the platform.

[W]hen The Post asked Twitter spokeswoman Liz Kelley whether the company would similarly annotate Zhao Lijian’s dubious March tweets, she said they would not add fact-check warnings “at this time.”

Pressed further for a rationale, Kelley later said the company had changed its mind and “after further review, we’ve added labels to these two tweets.”

In a statement to The Post, Twitter said: “The tweets in question contain potentially misleading and harmful content about COVID-19 and have been labeled to provide additional context to the public. This enforcement decision is in line with the approach we shared earlier this month.”

These are indeed among the trashiest tweets in recent memory on a platform overflowing with human garbage:

Zhao Lijian is the spokesman for China’s foreign ministry. That was official CCP propaganda. One might ask: Why are Chinese spokesmen allowed to post on Twitter in the first place given that the platform is formally banned in China (although accessible via simple workarounds, like VPNs)? And if Twitter’s going to fact-check Zhao, when will it get around to fact-checking the oceans of other ChiCom propaganda washing through its servers every day?

Fact-checking China would be a full-time job for thousands upon thousands of people. I hope Twitter’s ready to make some hires.

Zhao’s tweets weren’t the only ones they fact-checked yesterday. This one, much closer to home and more current, was noticed by the Times:

The guy in the MAGA hat isn’t the cop who killed George Floyd. Slapping a “manipulated media” tag on that tweet is actually a sterling example of how Twitter’s new feature really might do some social good by correcting a dangerous, inflammatory mistake before it’s had time to gain momentum online. It’s a fact-check in the truest sense too: We can debate the virtues of mail-in ballots, which is what Twitter dinged Trump for, but there’s no debating that that’s just not the same person in the photos Ice Cube tweeted.

If Twitter’s going to keep going with the fact-checks, though, it has to do a better job of marshaling the evidence. Go look at the page you arrive at when you click the “Get the facts about COVID-19” link that was added to Zhao Lijian’s tweet. It’s a hash, almost inscrutable. It should start by refuting his core claim that the U.S. seeded coronavirus in Wuhan but instead it starts with a Reuters piece noting that COVID-19 originated in animals, not in a lab. It goes on with that theme via a few tweets from a CNN producer from April, then — more than halfway down the page — you finally see a note that “Chinese officials and news outlets have shared unsubstantiated theories that a US lab was the source of the virus” followed by an excerpt from a New York Times story to that effect. Anyone who didn’t take the trouble to scroll would have missed the refutation of Zhao’s point.

In fact, given the influence China has over U.S. media, it’s suspicious that the fact-check page leads with a seeming non sequitur that’s *favorable* to China. If you want to punish the foreign ministry for telling lies about America, it’s weird that the very first thing in your case against them would be an assertion (from the WHO, of all outfits) that China didn’t let the virus escape from a lab, rather it came from animals. Which fact is actually being checked here, Twitter?