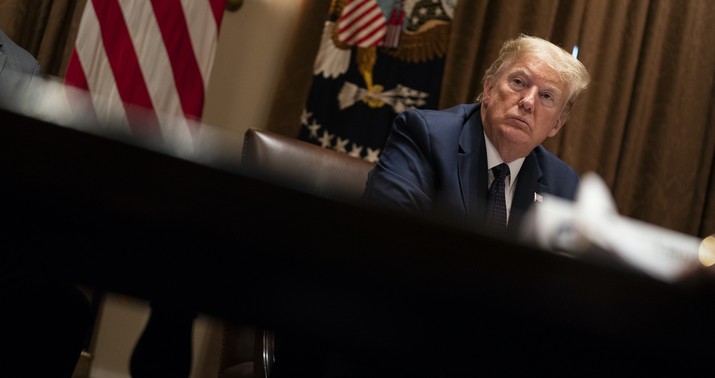 Tom Bevan, the head of RealClearPolitics, caught me off-guard when he tweeted this earlier.

The spread on Trump's job approval (-11.0) is the largest it's been since November 6 of last year. pic.twitter.com/nqwhifvKtl

That seemed … not right. Why would Trump’s job approval be crumbling now that daily deaths from coronavirus are down, testing is up, and the economy is beginning to reopen? It would have made sense for voters to turn on him temporarily six weeks ago, when New York was still in the thick of its crisis and there was no end in sight to the lockdowns. But now the picture has brightened a bit. His numbers should be looking better, not worse.

Here’s the same graph that Bevan tweeted, but with a more abbreviated timeline. This shows Trump’s approval from March 27, when he was underwater by just two points, to today. The trend is dramatic.

RCP calculated its latest number by taking an average of eight separate polls. Two of those polls were conspicuously bad for Trump: Morning Consult’s latest survey had his job approval at 40/57 while Rasmussen, surprisingly, had it at 42/57. My guess is that they’re both outliers and that the next few polls will confirm that Trump’s numbers are closer to 45/52, in line with his traditional job approval. I emailed a friend in politics who crunches number like these for a living, though, and he said he thought the trend was real. When I asked why Trump would be facing a backlash over coronavirus now instead of weeks ago he said it was simple: There’s always some lag time in popular opinion between when something happens and when public reaction begins showing up in polls. It’s why politicos focus on second-quarter economic reports instead of third-quarter ones before an election, he said. It can take months for information to fully penetrate and meaningfully shift public opinion.

I don’t know that I buy it. Reaction to two earth-shaking events, the explosion of coronavirus in the U.S. and the ensuing economic collapse, shouldn’t take months to register in polling. George W. Bush’s job approval went from 51/39 to 86/10 within a week of 9/11. If you want to tell me that that’s an unfair comparison because 9/11 was a discrete event and the pandemic and economic fallout are ongoing crises, okay. Even so, the trajectory of deaths and job losses was clear enough a month after the lockdowns began. If Trump’s sudden slide is the result of a reaction to that, shouldn’t we have seen it in polling a month ago? And shouldn’t we be seeing some evidence of those supposed slide in the head-to-head polling with Biden? The most recent survey found Trump within three of the Democrat, not what you’d expect if the bottom was falling out in his support.

In fact, look again at the graph above. After falling modestly between late March and mid-May, his job approval spent a week recovering and climbing again — only to slide again now. That makes no sense to me. I think what we’re seeing here is statistical noise, soon to disappear.

Although … the Rasmussen numbers lately have been noteworthy. They’re the most famously Trump-friendly pollster in the business, and yet:

It’s rare for Rasmussen to record three straight days of -16 or worse in its net approval index for him. The last time it happened was January 2019. Their numbers are the strongest evidence I’ve seen of a genuine Trump slide, even if I can’t figure out what would explain it. It can’t be his especially weird Twitter antics lately; no one cares about that outside of the small niche of online political news junkies.

His allies were already nervous about the race, though, even before this new round of polling. Politico reports today on a visit he received recently from a pair of trusted advisors:

David Bossie and Corey Lewandowski, two key allies and former political advisers to Donald Trump, went to the White House last week to issue him a warning: The president was slipping badly in swing states, and he needed to do something to fix it…

After his May 18 meeting with Bossie and Lewandowski, Trump called his top campaign lieutenants to vent his frustration about his political standing…

Republicans involved with setting up the Thursday meeting with Trump’s state directors said they were taken aback by Bossie and Lewandowski’s warning. They felt the need to mollify Trump, who has been kept abreast of his reelection effort but hasn’t always been aware of the granular, on-the-ground details.

Maybe that was just Bossie and Lewandowski trying to muscle their way into landing jobs with the campaign, but the two states they reportedly told Trump looked dicey, Arizona and Florida, really do look dicey right now. The last poll of Florida had Biden up six, the last poll of Arizona had him up seven. Another poll out of Arizona today is downright hair-raising:

Biden’s not going to blow Trump out there but Kelly may well blow out McSally, and the little bit of extra turnout he may generate for his race might be enough to help Biden over the finish line. A separate Politico piece today reports on Trump advisors grumbling that the campaign has wasted precious time by not attacking Biden sooner and more aggressively, to try to define him before he can define himself for the public this summer. But I think Jason Miller’s right: “The campaign is being smart because voters are not paying attention to politics right now.” It would have been a bad look for the campaign to start running ads screaming about Burisma in April amid news reports of thousands of COVID-19 deaths per day. Trump would have been accused of having his priorities out of whack. It was smart of him and his team to hold off until things calmed down. Now he can attack Biden without it seeming callous.

In lieu of an exit question, here’s a poll yesterday that shows Trump leading Biden by three — in Utah. I don’t buy that either, as there were various polls in 2016 that showed him clinging to a shockingly narrow lead there before he ended up winning the state going away. But needless to say, if there’s any truth to that one then he’s in deeper trouble than even he may realize.