Trump: We’ll have to regulate, or shut down, these social media platforms if they silence conservative voices 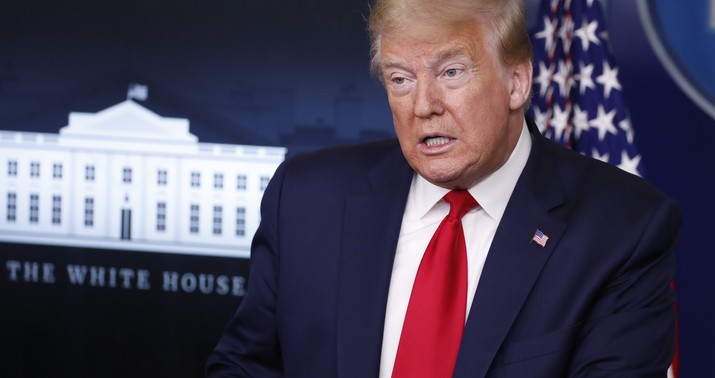 Strong argument here, except for a few things.

….happen again. Just like we can’t let large scale Mail-In Ballots take root in our Country. It would be a free for all on cheating, forgery and the theft of Ballots. Whoever cheated the most would win. Likewise, Social Media. Clean up your act, NOW!!!!

Twitter has now shown that everything we have been saying about them (and their other compatriots) is correct. Big action to follow!

1. He doesn’t care about Twitter silencing “conservative voices,” he cares about them policing his personal tweets. It’s not a coincidence that this eruption came the day after the company made the feeblest gesture to finally rein him in. If he cared about social media bias against conservatives he would have demanded some sort of regulatory action long ago.

2. Twitter didn’t “silence” him, they added a fact-check to two of his tweets. Any other user of the platform would have been suspended long ago for some of the things Trump has posted, but he gets special privileges. And then whines that they’re not special enough.

He tweeted this a few hours ago, just to show the many people on all sides criticizing him for repeatedly smearing Joe Scarborough that he’s not going to stop and Twitter isn’t going to lift a finger to stop him:

Psycho Joe Scarborough is rattled, not only by his bad ratings but all of the things and facts that are coming out on the internet about opening a Cold Case. He knows what is happening!

Special privileges. Just not special enough to suit him.

3. I don’t know what he thinks social media “attempted to do” in 2016 but the biggest social media platform, Facebook, was a boon to his campaign in all sorts of ways. Trump has even been known to brag that he’s “number one” on Facebook, whatever that means.

4. He’s not going to regulate or close down anything. I doubt he even knows what he means by that beyond some sort of general authoritarian wishcasting about using the state to punish an outlet like Twitter that’s momentarily embarrassed him after giving him the run of the place for years. It’s like when threatened to adjourn Congress last month because he was mad that they weren’t confirming his judges quickly enough, or when he told governors last week that he’d force them to reopen churches by designating them as essential services. He floats these ideas because he has an instinct about what he’d like to do, not because he has a realistic sense of what he’s legally empowered to do. He’s probably calling around today to cronies with law degrees like Ted Cruz and Lindsey Graham to ask them how Article II will allow him to harass Twitter.

Probably they’re telling him that under Section 230 of the Communications Decency Act a platform can lose its immunity from defamation suits by meddling with user content, thereby turning it into a publisher. Adding the fact-check notice to Trump’s tweets is meddling! But that’s nonsense legally, itself a form of wishcasting about what the law should be rather than what it is. Section 230 allows platforms to exercise some traditional editorial functions and even to pre-screen objectionable content before it posts. You don’t lose your immunity by moderating what’s on your site. Congress could change that, of course, but (a) an amendment to that law isn’t getting through either chamber, not so long as the filibuster exists in the Senate; (b) McConnell would probably rather drink poison than embark on a quixotic election-year mission to mess with Americans’ favorite social media platforms; and (c) if Congress did amend the statute, it would force platforms to regulate content much more strictly, not less strictly. Twitter would be inclined to filter out all but the most timid, unobjectionable pap so as not risk lawsuit liability. They might start by deleting Trump’s Scarborough tweets, just in case Joe opts to file a libel suit and make them a co-defendant.

Maybe Trump will sic the DOJ on Facebook and Twitter with antitrust actions instead. Having the president unleash federal power on corporations simply because his vanity was bruised by a modest fact-checking of his own tweets would be a nice tableau for a decadent country as it slips further towards dystopia.

5. It’s downright batsh*t that he wants to have a big food fight over Twitter and Joe Scarborough five months out from an election that he’s currently losing, with the country anxious about a pandemic and economic collapse. He’s getting piled on by some of the usual suspects…

I know Joe Scarborough. Joe is a friend of mine. I don't know T.J. Klausutis. Joe can weather vile, baseless accusations but T.J.? His heart is breaking. Enough already.

…but also by some not-so-usual ones. Like the editorial board of the Wall Street Journal:

Mr. Trump always hits back at critics, and Mr. Scarborough has called the President mentally ill, among other things. But suggesting that the talk-show host is implicated in the woman’s death isn’t political hardball. It’s a smear. Mr. Trump rightly denounces the lies spread about him in the Steele dossier, yet here he is trafficking in the same sort of trash…

We don’t write this with any expectation that Mr. Trump will stop. Perhaps he even thinks this helps him politically, though we can’t imagine how. But Mr. Trump is debasing his office, and he’s hurting the country in doing so.

Interesting admission there that they don’t expect Trump to stop. What they want to say but stopped just short of saying, I think, is that this isn’t part of any reelection strategy. It’s compulsive. It’s evidence of a sickness of some sort, where Trump can’t help but lash out first at Scarborough and then at Twitter even though doing so doesn’t help him a bit towards beating Biden and may actually hurt. The Washington Examiner’s editorial board made that case today in a piece of its own:

Whatever his issues with Scarborough, President Trump’s crazed Twitter rant on this subject was vile and unworthy of his office. Some will undoubtedly shrug it off as Trump being Trump, but one could hardly be blamed for reading it and doubting his fitness to lead.

To say Trump owes Scarborough an apology is to put it mildly. But in the end, Scarborough won’t be the one hurt by this. Against a weak opponent, Trump somehow managed in 2016 to win despite carrying on with sad, deluded conspiracy theories about Sen. Ted Cruz’s father being involved in the assassination of John F. Kennedy. Against a less reviled opponent, he may not be so lucky in 2020.

And observers might even someday look back at this incident as the instant when things began to unravel.

I doubt anyone outside the activist class is following this episode at all. But as a portent of how reckless and unfocused Trump might become if he falls further behind Biden, the Examiner makes a fair point. He’s down only five points or so in national polls right now, expecting an all but certain economic rebound later this summer to help him close that gap. If it doesn’t happen, or if he slides another five points, how unbalanced might he get?

If he wants revenge on Twitter, all he needs to do is sit back and wait. They’ve opened Pandora’s box by introducing the fact-check feature. Having now applied it to him, they’ll be expected to apply it evenhandedly, not just to Democrats but to much more repulsive characters than Trump himself:

So @Twitter can fact-check @realDonaldTrump but cannot do the same for Islamic republic of Iran’s leaders including @khamenei_ir , @Rouhani_ir and @JZarif who are actively using the platform to get their “messages” out to the world?

Not only that, but any tweet from Trump that’s appears without a fact-checking notice will now be read as enjoying an implicit seal of truth from Twitter. That headache is a more realistic problem for them than Trump fantasizing about closing them down or whatever.

Exit quotation from Jonathan Last, who sympathizes with Twitter on having to impose an external filter on Trump because he lacks the internal filter that normal human beings have: “[I]t falls to Twitter to police its own platform because the old norms of self-policing are gone.”

Pelosi: If the community doesn’t want the statue, the statue shouldn’t be there

Flip-flopping the days away

Why Trump is continuing to oppose Sessions

Little to gain, but probably not that much to lose, either

Lopez Obrador to Trump: Hey, thanks for not mentioning the wall in front of the press

Spotlight on trade and immigration

Hoo boy: My executive order on DACA will include a “road to citizenship,” says Trump

Plus changing jaws and crooked teeth.

Today’s hot topics on Relevant Radio®: Nationalism, patriotism, the Constitution, and “1968 on steroids”

Michigan Dem warns her party: The polls showing Biden with a big lead over Trump are wrong

“I’ve been literally begging people to ignore those polls.”

“…people are going to have to die.”

Barkley: Sports are turning into a divisive “circus” and fans might not come back

“The last thing they want to do is turn on the television and hear arguments all the time.”