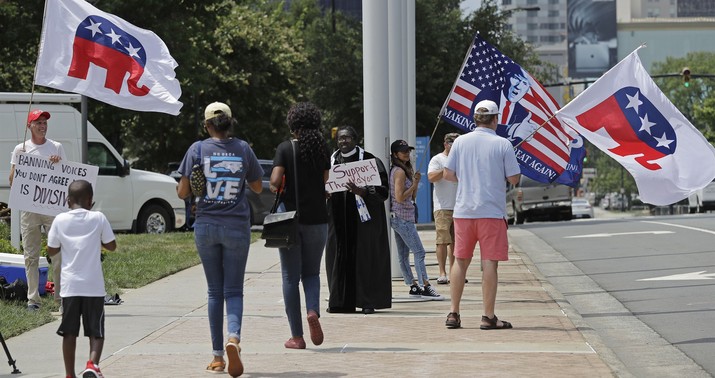 I named two yesterday that I thought might fill the breach after he threatened to pull out of North Carolina because the governor won’t guarantee that the event can be held at full capacity. But I forgot an obvious third candidate, which identified itself a few hours ago.

More on that in a minute. First, here’s RNC chair Ronna McDaniel insisting that the offers are pouring in:

“The president is right to say to the governor, you need to assure us before we lock in all these hotel rooms and we bring all of this revenue to your state that you’re going to let us have this convention,” McDaniel said. “There’s a lot of states that are calling the president right now saying, hey, why don’t you bring that revenue to our state.”

“We want to have it in North Carolina. The president loves North Carolina, it’s just the governor and he’s got to work with us. Every state we talk to is saying, we want to nominate the president here. They’re so excited to have that,” she later continued. “But this governor [Roy Cooper] is up for reelection, he hasn’t given us the assurances we need, we need to be able to move forward in a concrete way.”

If McDaniel or anyone else at the RNC ever insisted that the convention be held at full capacity until Trump tweeted it out yesterday morning, it’s news to me. Until about 24 hours ago it appeared that the committee was considering scaled-down versions of the proceedings, which is basic good planning under the circumstances. No one knows what the outlook will be on coronavirus in North Carolina come August, including Roy Cooper; the sensible thing to do is to prepare for all contingencies. Trump blew that up yesterday morning, though, inviting America’s more reckless governors and mayors to promise him a full-capacity convention right now no matter what it might mean for the health of their citizens three months from now.

Jacksonville’s mayor was first to answer the bell:

2. We would be honored to host the Republican National Convention in that same world class facility. Thankfully, @GovRonDeSantis and my administration have created a regulatory framework that operates in way that is attractive to significant events like these.

“Jacksonville stands out because its mayor is not only Republican but also because the area has not been hit as hard by the coronavirus pandemic as South Florida,” Politico reported this morning, noting that “DeSantis has constantly touted Jacksonville as he has begun to reopen the state.” DeSantis is going to run for president in 2024 so he’ll let Trump do anything he wants with the convention this year in hopes of strengthening their alliance. And of course Florida is the ultimate swing-state prize this fall, giving Trump special reason to want to flatter voters with a grand gesture. Biden has been competitive in polling there too thanks to his support among senior citizens, making pandering to Florida newly urgent for Republicans. My tinfoil-hat theory of Trump’s demand yesterday about full capacity for the convention in Charlotte is that he drummed it up as a pretext for moving the convention to FL, a more important battleground.

Florida was one of the states I identified yesterday as an obvious destination for the convention *if* Trump is serious about moving it. The other was Arizona, another swing state governed by an agreeable Republican which Trump badly needs to win this fall. Flattering Arizonans by holding the convention could be a twofer, in fact, by giving Martha McSally a little more attention in her increasingly longshot attempt to hold her Senate seat. But there’s a third state I forgot, mainly because righties aren’t used to thinking of it as a swing state — Georgia. And that’s governed by a Republican too, one who may be especially eager to kiss up to Trump:

With world-class facilities, restaurants, hotels, and workforce, Georgia would be honored to safely host the Republican National Convention. We hope you will consider the Peach State, @realdonaldtrump!

The stakes in Georgia couldn’t be higher. Trump and Biden are neck-and-neck in polling and both Senate seats are on the ballot, with the races looking to be close. Downballot Republicans like David Perdue, Kelly Loeffler, and Doug Collins could use a presidential boost. Georgia was also one of the first states to reopen for business, so much so that Trump grumbled during a coronavirus briefing that Kemp had moved too quickly on services like nail salons that require personal contact. By moving the convention there, Trump could reward Kemp for being one of the first governors to end his state’s lockdown. And Kemp would no doubt welcome the chance to heal the breach with Trump that was caused by him choosing Loeffler over Trump’s favorite, Collins, in filling the Senate vacancy last year.

I hope ditching North Carolina doesn’t come back to bite him and Thom Tillis in the ass, though. NC isn’t as big of an electoral prize as Florida but it’s still pretty big, with nearly as many electoral votes as Michigan and more than Wisconsin and Arizona. Trump won it by less than four points in 2016. Flipping North Carolina and Pennsylvania would leave Biden needing just one more red state anywhere on the map to win the presidency, and he has a solid lead in Michigan right now. If the RNC pulls out of Charlotte because the governor won’t guarantee something he can’t realistically guarantee right now, taking all sorts of business with them, even a small backlash by voters could have momentous consequences.

By the way, the trend lately in NC isn’t great:

On Tuesday, Mecklenburg County had at least 3,400 COVID-19 cases — more than twice the next-highest county — and 73 deaths, also the most in the state, according to state health officials. A third of the cases were tallied in the past two weeks.

Statewide, there were 24,000 cases as part of an upward trend that included 1,100 new cases Saturday, the state’s worst daily increase yet.

Here’s Dr. Nicole Saphier on Fox yesterday politely reminding the president that “putting a lot of people in a small area is definitely not good for us” and noting that “If they have this massive rise of cases just at the end of August, then all of a sudden the fall school year is going to be completely disrupted.” That’s another risk of a full-capacity convention — not just that attendees will infect each other but that they’ll seed an outbreak locally, which would also have considerable backlash potential at the polls in the state. Realistically there’s no scenario in which a full-capacity convention is a good idea although there are scenarios where it’s less risky than it might otherwise be. Reportedly North Carolina health officials wrote to the RNC after Trump’s tweets yesterday reminding them that there must be “several scenarios planned that can be deployed depending on the public health situation.” We’ll see how they respond.