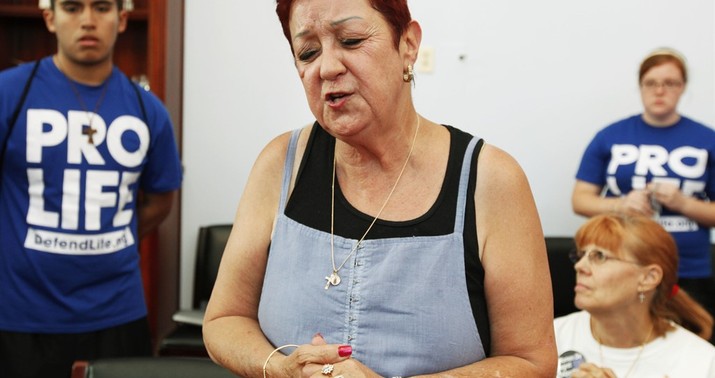 Assuming she’s telling the truth, and more on that in a second, this might be the most benevolent bit of astroturfing in American political history.

But it’s also depressing. On the one hand there’s McCorvey converting her influence in a national debate over the dignity of life into a payday. On the other there are evangelical leaders willing to bribe a vulnerable lower-class woman desperate for money into acting as their secret mouthpiece. Barf-bag material all around.

It’s shocking to read her admission but pro-choicers will be, and should be, angrier than pro-lifers. She worked against their cause for 20 years. In the end, her effort to undo that work consisted of one brief recorded interview. How many people who were touched by Jane Roe’s journey from legalized-abortion advocate to pro-life Christian will even see this clip?

“I was the big fish. I think it was a mutual thing. I took their money and they’d put me out in front of the cameras and tell me what to say. That’s what I’d say,” she says in “AKA Jane Roe,” which premieres Friday on FX. “It was all an act. I did it well too. I am a good actress.”

In what she describes as a “deathbed confession,” a visibly ailing McCorvey restates her support for reproductive rights in colorful terms: “If a young woman wants to have an abortion, that’s no skin off my ass. That’s why they call it choice.”…

The documentary includes scenes of McCorvey on election night 2016 — a few months before she died of heart failure at age 69 — expressing her support for Hillary Clinton. “I wish I knew how many abortions Donald Trump was responsible for,” McCorvey muses. “I’m sure he’s lost count, if he can count that high.”

She passed away in 2017. The footage comes from an interview she did a few months before her death for a documentary that’s being released this week.

Reverend Rob Schenck, who was interviewed for the film and who has since also drifted away somewhat from the pro-life movement, apparently corroborated her claim — at least the part about being paid and coached:

“I had never heard her say anything like this… But I knew what we were doing. And there were times when I was sure she knew. And I wondered, Is she playing us? What I didn’t have the guts to say was, because I know damn well we’re playing her.” Reverend Schenck admits that McCorvey was “a target,” a “needy” person in need of love and protection, and that “as clergy,” people like Schenck and Benham were “used to those personalities” and thus easily able to exploit her weaknesses. He also confirms that she was “coached on what to say” in her anti-abortion speeches. Benham denies McCorvey was paid; Schenck insists she was, saying that “at a few points, she was actually on the payroll, as it were.” AKA Jane Roe finds documents disclosing at least $456,911 in “benevolent gifts” from the anti-abortion movement to McCorvey.

I believe it — but I’m not sure I believe her conversion was completely phony. She became a Christian and then a pro-life advocate in the mid-90s, right? And until this interview from the new documentary surfaced, it was assumed she died a pro-life advocate. Twenty years is a long time to do paid propaganda, and $450,000 spread across those 20 years isn’t much pay to do it. If in fact McCorvey was insincere, I’d guess that the adulation she received from pro-lifers for switching sides was as least as much of a reason for her sticking with it as the money was.

And maybe she wasn’t insincere:

I spoke to this woman off the record, and I highly doubt this is true. Though even if it is, it says nothing about the morality of abortion. https://t.co/8wlTrH9yXt

The Daily Beast notes that other interviews in the documentary suggest that McCorvey really did break off her relationship with her longtime girlfriend after she became an evangelical in the mid-90s, leading her girlfriend to feel “confused and hurt.” Maybe McCorvey really did become a pro-life Christian and then, at some point between the mid-90s and her death, soured on it for whatever reason and drifted back towards pro-choicers. Claiming in her deathbed interview that she had been acting the whole time would have been an efficient way at getting back at whoever on the right had wronged her.

If in fact this was all mercenary on her part, was turning pro-life even the most lucrative option for her? Probably — both left and right looooove converts, since converts validate their belief that they’ve been right in their positions all along. But McCorvey was a pro-choice celebrity unlike any other. She could have done pro-choice speaking tours, Planned Parenthood events, on and on.