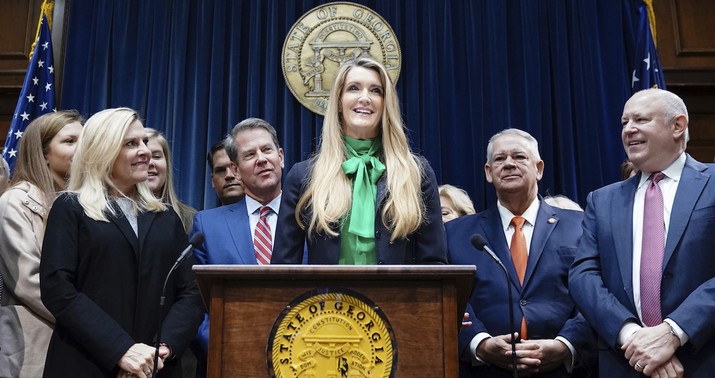 I’m a cautious “no” on this but am open to persuasion. Some Georgia Republicans (who are no doubt friendly to Loeffler rival Doug Collins) are chattering about it to the media, spooked that the FBI sniffing around the curious timing of her stock sales is going to tar the whole party by association.

And remember, there’s a lot on the line in Georgia this fall. Not just the presidency but both Senate seats will be on the ballot. If Loeffler’s baggage alienates independents, the damage could be catastrophic. Biden could win the White House with an upset in Georgia if he maintains his current leads in Michigan and Pennsylvania. Or, more realistically, Democrats could flip the Senate if they can steal either David Perdue’s seat or Loeffler’s.

It’s weird to think back and remember that Brian Kemp appointed her to Georgia’s vacant Senate seat because of her perceived, er, electability.

Former Georgia Rep. Lynn Westmoreland, a Republican who represented the Columbus area until 2017, said Republican Party officials should consider having a “kitchen table” discussion with Loeffler about her candidacy.

“Her getting out of the race is something that I think that some people just need to sit down and talk about,” he said in a phone interview…

A person close to Trump who had previously expressed anxiety about Loeffler “endangering our Senate majority,” told McClatchy on Thursday that the new attention to her stock sales were even more worrisome.

A Georgia Republican strategist familiar with the race told McClatchy that down-ballot candidates in the state are “nervous as hell” that Loeffler’s stock sales will be an election issue that will spill over into their races.

Her job approval was a hideous 20/47 in an internal GOP poll taken a few weeks ago, after her stock sales following an early coronavirus briefing drew media scrutiny. That same poll placed her at just 11 percent in Georgia’s jungle primary, far behind Collins at 29 percent and effectively tied with two Democratic candidates. There’s a new poll out today from Civiqs in the wake of the news that she turned over certain documents to the FBI relating to those stock trades. Not great:

Collins leads the field with 34%, followed by Democrat Raphael Warnock (18%), Democrat Matt Lieberman (14%) and Loeffler (12%). Other contenders, including former federal prosecutor Ed Tarver, were in single-digits and about 12% of respondents were uncertain…

In hypothetical runoff matchups, Loeffler trailed each of her potential Democratic opponents by double-digits. Collins, meanwhile, was deadlocked with both Lieberman and Warnock, and led Tarver 45-42…

Collins leads Loeffler 68-21 among Republican voters and 30-11 among women. He also leads the field among independents (24%), suburban (31%) and rural Georgians (51%). Two-thirds of voters over the age of 65 said they supported his campaign.

Loeffler’s job approval in this one was a breezy 21/59. More alarmingly, the same poll has Biden up a point on Trump and Sen. David Perdue trailing Democratic challenger Jon Ossoff, 47/45. I’m suspicious of that last result — Perdue is certainly a favorite — and other polls of Georgia from a few months back had Trump leading Biden comfortably (although that was before Biden had started racking up primary wins and the pandemic exploded). On the other hand, Collins’s and Loeffler’s numbers do roughly match what the internal Republican poll found a few weeks ago. And Perdue himself has warned supporters that the state is in play due to changing demographics.

So should Loeffler drop out?

I’m a cautious “no” because I’m reluctant to throw her to the wolves before evidence of real wrongdoing has emerged. Her stock sales may seem suspiciously timed but the FBI didn’t serve her with any warrant and she claims that the sales were initiated by financial advisors who are managing her assets without input from her. More importantly, I’m not convinced — yet — that she’s a liability to the wider party. If she were the only Republican in the Senate race there’d be real concern about letting her take her chances in a runoff as a wounded candidate. But she isn’t, thanks to Collins; if she’s really damaged goods, as her critics claim, then he should emerge early as the consensus GOP choice in the jungle primary. Maybe she’ll quit then. And even if she doesn’t, no biggie: Republicans have a very good track record of winning runoffs in Georgia. So long as Collins finishes in the top two, he should be able to handle any Democrat one-on-one.

Given how many Democrats are running for the seat (eight at last check), there’s an outside possibility that Collins and Loeffler will be the top two finishers, ensuring that a Republican will hold the seat. Meanwhile, as bad as her job approval is, she’s got a mountain of money to spend to get those numbers up before November. And although Georgia is a little purpler than it used to be, the pros who are watching the state still aren’t ready to call it a toss-up.

Even so, it will take more than just an improvement in the Atlanta and urban/suburban areas of the state to flip it Democratic. It also takes shaving points off the large share of the vote Republicans like Trump and Kemp can generate from small town, exurban and rural parts of the state…

For Democrats, winning Georgia is like trying to lose those last 5-10 pounds. On paper, it doesn’t seem all that hard. But, once you spend two weeks desperately looking down at a scale that doesn’t budge, you realize it’s going to take a ton of effort to lose each and every pound. For now, Georgia stays in Lean Republican.

The best arguments for forcing Loeffler out are if she starts spending money to try to take down Collins instead of promoting herself or if her inchoate scandal metastatizes and begins to spill over into Perdue’s race. Maybe the FBI will clear her, in which case at this point she seems likely to end up as an afterthought in the jungle primary but not an agent of Republican destruction. If she weakens Collins, though, or if she weakens the party because she can’t shake her rep as a plague profiteer, someone should have that “kitchen table” discussion with her. Or Trump could just endorse Collins and effectively end her chances, I suppose.