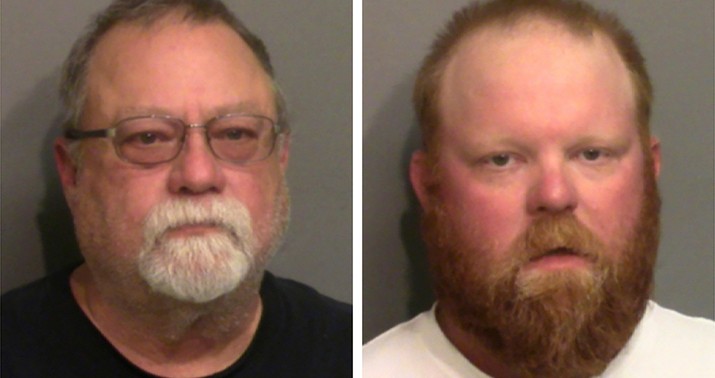 Riding around in the bed of a pick-up truck, brandishing a rifle and chasing down a man whom he wasn’t sure had committed any crime seemed like the hallmarks of studious professionalism to me.

If McMichael apologists insist on looking beyond the crime to try to help the defense, e.g., trumpeting the video footage of Arbery on Larry English’s property on the day of the shooting because that supposedly proves … something, then let’s look beyond it on the prosecution’s behalf too. What was Greg McMichael doing trying to perform a citizen’s arrest when he wasn’t even qualified to make an arrest in his final months as a cop? Citizen’s arrests are always dicey, especially when they involve firearms. But if we’re going to cut an ex-cop slack on that, we should at least want assurance that he knew what he was doing.

Did McMichael? I mean, obviously not, given the outcome of his incident with Arbery. But even before that.

Gregory McMichael’s personnel documents provide an incomplete account of his employment history with Glynn County, but they indicate that he was stripped of his powers to arrest people on at least two occasions: once beginning in January 2006 — because of an undisclosed infraction the previous year — and again in February 2019, when the Georgia Peace Officer Standards and Training Council (POST) issued a suspension order for “failure to maintain training for the year 2018.”…

The standards and training council notified district attorney Johnson, then McMichael’s boss, that McMichael had fallen short in various types of training hours in 2005, 2006, 2007, 2009 and 2010. McMichael did not complete the mandated use-of-force and firearms training in at least three of those years, according to the records…

In a memorandum [in February 2019], McMichael agreed to give up his badge and weapon and was reclassified as a non-sworn employee, assigned to work in the Camden County District Attorney’s office until his retirement in June 2019.

A February 2019 memo signed by McMichael and other officials in the district attorney’s office stated he “will not engage in any activity that would be construed as being law enforcement in nature.”

His solemn vow not to do anything cop-like evidently didn’t apply to violent confrontation in the middle of the road with a man who was guilty at most of a minor misdemeanor.

McMichael received a waiver for missing training between 2006 and 2009, citing health problems, but it’s unclear why he missed it again in 2018. I’d like to hear more too about that “undisclosed infraction” from 2005 that so alarmed his superiors that he temporarily lost his power to arrest people. What sort of grave mistake might he have made on the job that would require action as draconian as that?

Did it involve … overzealous apprehension of suspects, shall we say? I’m just speculating, but the McMichael apologists have done a lot of speculating about Arbery too. Turnabout’s fair play.

Over at Bearing Arms, Cam Edwards identifies McMichael and his son as a pair of “Karens,” Internet lingo for the sort of privileged, meddlesome middle-aged person who enjoys putting less powerful people in their place. (To help visualize, a Twitter pal recently described Gretchen Whitmer as the Karen-in-chief due to her seemingly punitive lockdown orders.)

What I can’t understand is why I’m seeing some people who usually make fun of Karens defend the McMichaels on social media. When a Karen called police on a dad playing catch with his kid in a park, folks had a field day mocking her for her heavy-handed response and siccing the police on people for no good reason. Two Karens go after a guy that they’re pretty sure has been wandering around the neighborhood at night and going into a neighbor’s unfinished home with the intent of forcing him to stop so they can “ask him some questions” and it’s all good? It’s not all good. It’s Karen-ism on steroids.

Right, although Karen-ism usually ends with the target feeling demeaned and annoyed, not bleeding out on the asphalt.

In lieu of an exit question, read this curious story about a mysterious note that was left at the makeshift memorial where Arbery was killed. It reads, “Ahmaud – I am so sorry. I should have stopped them. I am so sorry.” Arbery’s family and their lawyer were keen to find out who wrote it. Who might have been in a position to stop “them,” presumably a reference to the McMichaels? The only person I can think of is the person who was driving the car that was following Arbery and recording the footage of his death, but the GBI said just within the last few hours that it’s identified the author and “the individual is not connected to the Ahmaud Arbery murder investigation in any way.” Hmmm.