Data: Americans might be starting to relax on social distancing 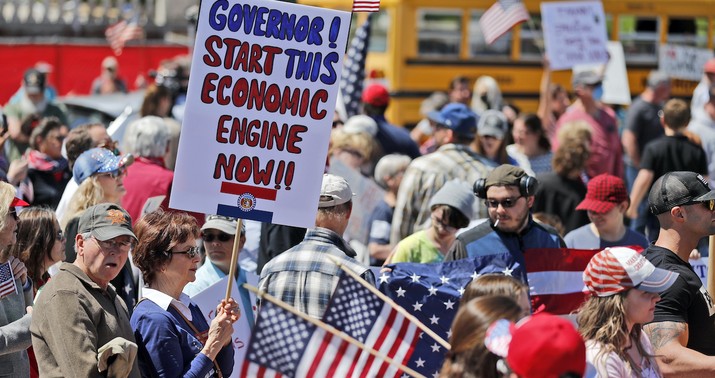 There’s plenty of data that Americans are getting out of the house more, lockdown orders or no lockdown orders. But there’s little evidence that they’re not observing basic good social-distancing practices when they do so.

“Regardless of what the orders say or the governors say, we’re seeing the whole country softening up,” said one SafeGraph staffer. But different regions are softening up at different degrees. As you’d expect, a much greater share of people in the borough of Queens in New York City is spending time at home than the share in rural Texas.

Via Forbes, Apple’s mobility data also suggests an uptick in walking and driving over the last few weeks. Does that mean people are getting lax about social distancing? Maybe?

Here again there are meaningful differences by region. Compare NYC, the eye of the storm, where businesses remain shuttered…

…to Atlanta, Georgia, where the governor has allowed some businesses to reopen:

There’s no evidence here that Atlantans are being irresponsible about social distancing. In fact, notes Forbes, Apple’s data doesn’t even prove that people are *actually* walking and driving more. It’s based on searches for directions on Apple Maps, not confirmed movement of people.

For that we turn to Foursquare, which *is* tracking actual foot traffic. Spend some time with their post, as they have the most granular data of any tech outfit I’ve seen on where people are going when they leave home. That’ll give us more of a clue of whether social distancing is being observed. Are people defying stay-at-home orders to linger in enclosed indoor spaces, like movie theaters, or are they going to parks and other safe outdoor areas?

Here’s a telltale pair of graphs. Foot traffic to fast-food chains, which specialize in take-out, is rising and almost back to pre-COVID levels in some regions…

Traffic to gas stations and auto shops is also up lately, further evidence that people are driving more. Traffic to hardware stores, where many people buy their gardening supplies, and hiking trails is waaaaay up. Traffic to, er, liquor stores has also increased as people cope with the stress and ennui of lockdown America. Traffic to restaurants, bars, offices, gyms, clothing stores, and movie theaters — indoor businesses where customers spend extended time, and where they’d logically be most at risk of infection — is still a long ways down, as you’d expect given the orders in many states to shutter those businesses. (Traffic to bars has ticked up lately, which isn’t surprising.) The Apple data I posted above shows people in New York and Atlanta alike still shunning mass transit too, which is wise.

Looking at all of that, it’s hard to say conclusively that Americans are relaxing on social distancing. They’re getting out more, but really only to the places you’d expect people to go when they’re worried about a contagious disease. They’re getting groceries, they’re grabbing pizza and booze, they’re buying stuff for home projects, but they’re not hanging out. And if they are, the proof isn’t in any of these numbers. I think the most confident thing we can say about social distancing right now is that there’s *probably* been some backsliding simply by dint of the fact that people are moving around. Some Americans will congregate when they’re out, no matter how bad of an idea that is. But are enough of them doing so to trigger a second wave? No evidence of that yet.

Remember, thoughtful lockdown skeptics have made the case that lockdown orders are mostly incidental to how people behave. Americans had already begun avoiding vectors of transmission like restaurants before stay-at-home orders started being issued last month. (Scroll through the graphs in NPR’s post and you’ll see that the shift towards staying at home began in Virginia, Texas, and New York long before governors started handing down orders.) Go figure that as the orders lift now, or are increasingly ignored by people still subject to them, that smart social distancing would continue to be practiced anyway.

By most people, I mean. The scene yesterday in Huntington Beach, California, where people turned out to protest Gavin Newsom’s continuing lockdown order, wasn’t a model example of social distancing, as you’ll see below. Right, right, they were outdoors, which minimized the risk of transmission, but crowd density matters. If it didn’t, scientists would be A-OK with people packing into outdoor stadiums to watch sports and concerts, which they aren’t. In lieu of an exit question, here’s a link to the Kinsa “health weather map” for you to bookmark in case you haven’t already. We haven’t discussed their data much lately since there hasn’t been much to say: Virtually the entire country has been holed up at home so fever rates are at rock-bottom levels. Now that people are beginning to reemerge, that should gradually change. Keep an eye on their “trends” map as an early clue to where new hotspots are developing.

International insult: Statue of Melania Trump is canceled in Slovenia

“They are groups that need to be moved to the forefront, in my opinion.”

Lemon: Let’s face it, Jesus Christ “admittedly was not perfect when he was here on the Earth”

God and man at CNN.

Today’s hot topics on Relevant Radio®: Love in the time of COVID; SCOTUS and religious liberty

Pelosi to WH: A trillion dollars for Phase 4? That’s just the ante, pal

“It is clear that a major explosion took place…”

Surprise, sorta: Flynn case not over yet … by a long shot

NFL players uninterested in sharing the burden of lower revenues

Maybe you should take the season off after all

“You don’t see me complaining abt ‘cancel culture'”