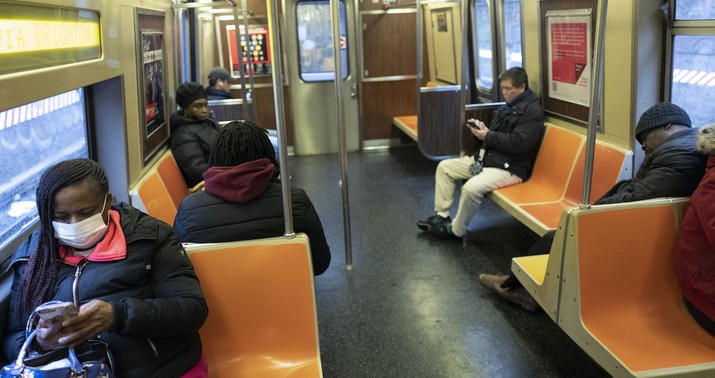 So soon? I was thinking we could wait until there are 20,000 dead to begin minimally responsible sanitation efforts on a turbo-charged viral incubator like subway cars.

Millions of people packed in cheek by jowl in a cramped space, day after day at the start of the epidemic, with only sporadic disinfectant procedures until now. At this point it’d probably be more cost-effective to skip the cleaning and just inject passengers with the virus as they come through the turnstiles.

The New York City subway system will get you anywhere you want to go: Central Park, the Village, or herd immunity.

Cuomo floated the idea of disinfecting subway cars every 24 hours at yesterday’s briefing and the whole world did a double take: You mean they’re not doing that already? They were not.

New York will stop subways for four hours every night to disinfect the trains, under an agreement between the state and city aimed at protecting the essential workers who rely on mass transit.

The plan will affect about 10,000 riders who use the trains between 1 a.m. and 5 a.m., a period that has had the smallest ridership since the pandemic. It will require a lot of work from multiple agencies, but much of the effort will fall on the city, Governor Andrew Cuomo said Thursday at a press briefing…

Before the agreement, the state’s Metropolitan Transportation Authority was cleaning buses and trains every 72 hours, but the virus can live for hours or even days on surfaces, the governor said. Trains and buses should be disinfected every 24 hours, to protect the health of essential workers who rely on mass transit, Cuomo said.

“You have to disinfect every place a hand could touch on a subway car. Every rail, every pole, every door,” said Cuomo at today’s briefing. “Or, coughing, sneezing, wherever droplets could land.” Right. That’s been apparent since the first hour of the first day of the epidemic. And yet.

Do he and de Blasio know they’re supposed to wash their hands immediately after they wipe or do they normally wait 72 hours? I think Cuomo probably does. De Blasio, eh.

They were loathe to take this step because because taking the trains offline for a few hours will present a hardship for first responders who use the subway to get to work overnight. Cuomo’s looking to “shuttle buses, dollar vans and even for-hire vehicles” to fill that gap. It’s unclear to me, though, if it was the threat from the virus that finally prompted him to take this step — again, it’s a little late — or his revulsion towards the homeless, whose habit of sleeping in subway cars he called “disgusting” a few days ago. Clearing out the cars in the middle of the evening will partially solve that problem.

What did poor sanitation of subway cars do to feed the outbreak in New York? Circumstantial evidence from a new paper by MIT economist Jeffrey Harris:

“Principal transmission vehicle” is a … weighty phrase. What remains to be seen, and won’t be seen until the City is back open for business, is of what use even 24-hour cleanings are in holding down the second wave. A spotless subway car will be crawling with germs after morning rush hour, one would think. That problem can be partially solved by having MTA employees wipe down poles and rails intermittently during the day while the trains are running but nothing can be done about people breathing each other’s air when they’re crowded in together during busy times. Mask-wearing, which presumably will soon be mandatory on the subway, will help. But it won’t stop infection altogether in conditions like that.

Anyway, congrats to Cuomo for making this a priority, even if it came about eight weeks after it would have been useful. De Blasio would have thought of it but he was too busy ranting about Jews online. Here’s the governor at today’s briefing. Exit question: In worrying about new outbreaks, should we maybe focus less on people hanging out at the beach and more on whether major mass-transit arteries are being allowed to become viral petri dishes?