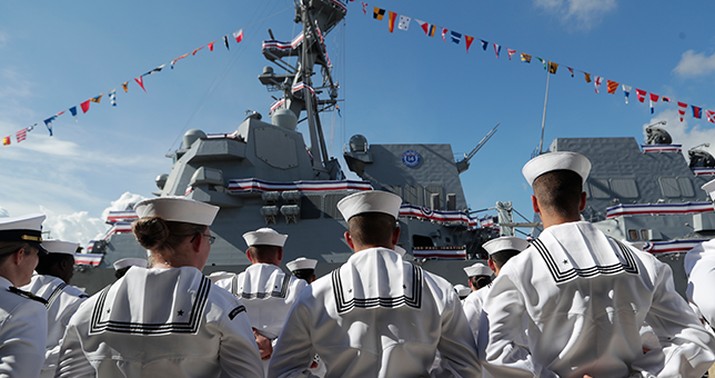 First-ballot Hall-of-Fame PR clusterfark. He overreacted to an officer going outside the chain of command in an extraordinary situation by firing him summarily, then overreacted again by giving a pissy speech to the crew that idolized that officer, then overreacted again by not immediately apologizing until his boss pressured him into doing so. To make it even dumber, yesterday’s disastrous speech aboard the USS Theodore Roosevelt made Modly guilty of the same thing that Crozier got in trouble for: He made a statement which he had reason to know would embarrass his superiors if it went public, and he also had reason to know that it *would* go public.

Hall of Fame. Might even be a unanimous vote.

Acting Navy Secretary Thomas Modly has submitted his resignation a day after leaked audio revealed he called the ousted commander of the USS Theodore Roosevelt “stupid” in an address to the ship’s crew, according to a US official and a former senior military official.

I’m curious to see if Trump accepts the resignation. The speech, after all, was one of the Trumpiest performances by a high government official of the president’s tenure. According to the Times, Modly “was angered about what he viewed as a public rebuke from the crew” after he fired Crozier and Crozier departed to roaring cheers from his sailors. So he flew down to Guam in a huff and griped at them in a whiny 15-minute spiel, appearing to insult Crozier at one point by claiming that he circulated his letter about a coronavirus outbreak on the ship either because he wanted it to leak or because he was too stupid or naive to know better. He didn’t even bother to address the crew face to face. Apparently he arrived, went to the intercom instead of assembling the crew in the hangar, and did his thing before leaving immediately.

You know what? I take it back. The comparison to Modly is unfair to Trump. For all his vindictiveness, the president can read a room much better than that. In fact, at yesterday’s coronavirus briefing, he made a point of complimenting Crozier by saying that his career prior to sending the letter was “very good” and that he didn’t want to ruin a good officer over “one bad day.” Modly has out-Trumped Trump in this case.

Democrats and some servicemen wanted fired as Navy secretary but it’s hard to believe Trump would want him out for showing his loyalty to the president a little too exuberantly. Trump was reportedly angry about Crozier’s letter because it undermined perceptions that the administration was on top of its coronavirus problem. “Modly got involved in the day-to-day deliberations to a greater degree than Navy tradition and the chain of command would expect precisely because Modly was obsessed with how the story might be playing inside the White House,” as a political science professor said to the NYT. Trump doesn’t normally make an example of deputies who serve his interests overly aggressively. The fact that Democrats like Elizabeth Warren wanted him to send Modly packing may make it that much easier for Trump to reject the resignation and keep Modly on staff.

[Mark] Esper, as the civilian head of the Defense Department, can fire Mr. Modly, as he did in November when the prior Navy secretary ran afoul of Mr. Trump over the president’s action to protect a Navy SEAL accused of a war crime. But Mr. Esper will not do so without getting approval from Mr. Trump, Defense Department officials said…

“Acting Secretary Modly’s decision to address the sailors on the Roosevelt and personally attack Captain Crozier shows a tone-deaf approach more focused on personal ego than one of the calm, steady leadership we so desperately need in this crisis,” said Representative Adam Smith, Democrat of Washington. “I no longer have confidence in Acting Secretary Modly’s leadership of the Navy and believe he should be removed from his position.”…

Inside the Pentagon, many officials said that they do not see how Mr. Modly can continue as acting secretary. Officials expressed anger over what they characterized as his lack of respect for the enlisted rank and file, particularly now, in the middle of a health pandemic.

That last paragraph points to the X factor that might convince Trump to let Modly go. As much as he doesn’t want to punish the guy for being overzealous in carrying out his wishes, he craves the respect of the military. It’s hard to be a nationalist with an image based on “strength” if the armed forces hold you and/or your deputies in contempt. Modly created a headache for him among American sailors. If you believe the reporting, it’s a big one:

In the close-knit world of the American military, the crisis aboard the Roosevelt — known widely as the “T.R.”— generated widespread criticism from men and women who are usually careful to steer clear of publicly rebuking their peers…

Several current and former Navy and national security officials said the Roosevelt episode illustrated how civilian leaders in this administration made questionable decisions based on what they feared Mr. Trump’s response would be…

When his 15-minute speech was over, signing off with a tepid “Go Navy,” Mr. Modly had effectively drawn an invisible line between him and the more than 4,800 crew members of the Roosevelt, one crew member said. This sailor added that many of the crew thought Mr. Modly had called them stupid for putting so much faith in their commanding officer. After Mr. Modly’s speech, junior sailors approached the crew member, he said, looking to leave the service after their first enlistment.

It’s hard to give a speech so terrible that servicemen start thinking about a new career afterwards. “Everyone on the ship is livid,” said one retired officer in touch with people on the TR to Yahoo News. “The unofficial Navy channels on social media lit up like a Christmas tree as reaction built, all of it negative… The most pervasive question was, ‘How quickly will he be fired?’” Esper reportedly tried to clean up the mess by forcing a belated apology out of Modly last night:

Defense Secretary Esper told acting Secretary of the Navy Modly that he must apologize for his remarks slamming the former commander of the USS Theodore Roosevelt, US officials tell CNN, prompting Modly's about face apology which was issued hours after he defended his comments https://t.co/DyhbwhRzVJ

Modly did apologize, insisting that he didn’t mean to imply that Crozier is stupid or naive and that he believes the opposite to be true. Too late. He gave Trump and Esper a black eye with the military. He had to offer to quit. Will Trump let him go?

And what happens to Crozier now? I can’t imagine they’d reinstate him as captain of the TR given Trump’s annoyance at the letter he sent. But maybe between his coronavirus diagnosis and the anger within the Navy at how this was handled, they make nice with him at this point. Like I said, Trump’s tone about him yesterday had changed noticeably. Unlike Modly, the president may have realized it’s time to cut his losses.