Audio: Navy secretary tells sailors Crozier was “too naive or too stupid to be the commanding officer” if he didn’t know letter would leak 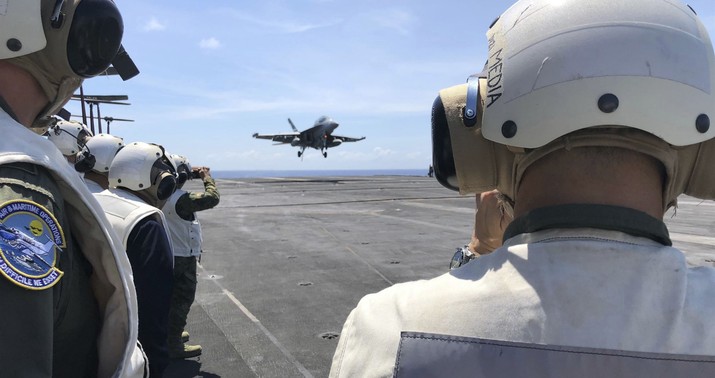 Via Task & Purpose, exactly the right message to send to a group of servicemen and women who’ve been demoralized by sickness, then by the firing of a captain whom most seem to regard as a hero, and then by the news that the captain himself is sick with coronavirus.

Seems like the perfect moment to sh*t on the guy in front of them. Listen below to the recording of acting Navy Secretary Thomas Modly addressing the crew of the USS Theodore Roosevelt about Capt. Brett Crozier’s termination and you’ll hear one sailor respond to the line about Crozier being “stupid” with a resounding “What the f***?!”

It makes me laugh that Modly fired Crozier for leaking (or, rather, for enabling a leak by circulating his letter about a COVID-19 outbreak on the ship too widely) and now this recording of his tone-deaf address has promptly leaked too. This is how you turn ordinary PR disasters into material for the next history book about legendary PR disasters:

Sounds like the speech didn’t go over well with the crew:

In a profane and defensive address that one crew member described in an interview as “whiny, upset, irritated, condescending,” Modly took repeated shots at the integrity of Capt. Brett E. Crozier, who was removed from command last week, and eventually injected partisan political tones into the address by attacking former Vice President Joe Biden, who has repeatedly criticized Crozier’s removal…

If Modly’s intent was to reassure the aircraft carrier’s crew that they would be taken care of as they attempted to limit the spread of Covid-19 aboard the ship, his address offered little in the way of concrete measures he intended to see through. Sailors on board the carrier told The Times that Modly didn’t tour the ship, and went right to the intercom for the address. The crew had submitted questions the night before, and several were submitted to Modly, who told the crew he would answer them when he got back to Washington.

It didn’t go over well at the Pentagon either:

When asked if Modly’s personal attack on Crozier was appropriate, a senior defense official said Monday, “I don’t know what to say.”

Modly’s use of the word “betrayal” is a loaded because saying an officer has betrayed the Navy is a court martial offense.

A defense official familiar with Modly’s remarks offered his opinion of Modly’s address, saying the acting secretary “should be fired. I don’t know how he survives this day.”

Oh, I know how he survives the day. According to David Ignatius, Modly told a colleague last week before Crozier was canned, “Breaking news: Trump wants him fired.” Other officials, including Mark Esper and Navy chief of operations Adm. Michael Gilday, wanted to handle the situation by the book by launching an investigation into Crozier but Modly wanted him out and Esper went along. “Modly became involved in matters that would normally be handled by uniformed officers,” noted Ignatius, with Gilday and others counseling him that “a dismissal would be unwise, and that the matter was best left to the military.” One retired four-star officer even accused Modly of “undue command influence.”

Modly called Ignatius after that column appeared and confirmed that Trump was a factor in his surprising decision to cashier Crozier. He reminded Ignatius that his predecessor, Richard Spencer, had quit after objecting to Trump’s interference in the Eddie Gallagher matter and that he didn’t want the Navy Department to get “crossways with the president” again. Which is exactly what Trump critics worried about after the Gallagher episode: Instead of military leaders following protocol, as Esper and Gilday wanted to do here, presidential whims would dictate how officers in cases with political repercussions would be disciplined. Modly says he didn’t hear from Trump personally that he wanted Crozier fired but he “clearly understood that Trump was unhappy with the uproar surrounding the Roosevelt,” in Ignatius’s words.

And so Crozier was nuked summarily. “[C]olleagues say the mistake that could cost Captain Crozier his career was charging headlong into the Trump administration’s narrative that it had everything under control,” as the Times put it. But maybe they didn’t have everything under control on the Roosevelt: A Navy official who spoke to the NYT for a different story claimed that Crozier “had repeatedly asked his superiors for speedy action to evacuate the ship. His letter, the official said, came because the Navy was still minimizing the risk.”

Sounds like Modly wanted to show Trump that he’s willing to overreact in the name of punishing officers who cause political problems for him, however justifiably. Think a guy like that is getting fired for dumping publicly on Crozier in a speech today? The president craves cronies who’ll go the extra mile to demonstrate “loyalty.” Modly’s job has never been more secure.

I think. I suppose if the media coverage of this speech is bad enough, Trump might conclude that his Crozier problem had turned into a Modly problem and now it’s time for Modly to go too. Here’s the audio. According to the Daily Caller, Navy commanders must have realized how bad it was because they took to warning the crew immediately afterward that they shouldn’t disseminate any transcripts or audio. Oh well.