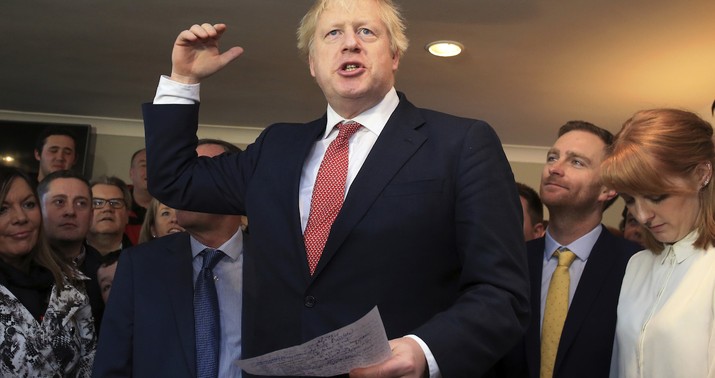 He was diagnosed 10 days ago and ran the government from isolation. He couldn’t shake his illness, though, and was hospitalized last night — supposedly for “routine tests.”

Which seemed doubtful. What sort of “routine” tests would be needed for a COVID-19 patient who’s on day 10 of their illness?

The fear was that his condition had worsened and British authorities were momentarily being coy about it. That fear is now confirmed.

It’s “precautionary,” we’re told, but again that sounds like authorities putting the best possible spin on a worsening situation:

We're told PM remains conscious. He's not on a ventilator but has been moved to the ICU as a precaution should he require ventilation

His top deputy, Foreign Secretary Dominic Raab, admitted today that he hadn’t spoken to Johnson since Saturday. For how long has Johnson’s condition been deteriorating, exactly?

As of a week ago, slightly more people in the UK with coronavirus had recovered and been discharged from the ICU than had died there. Less than 10 percent of deaths from the virus in the UK to date have come from people under 60. Johnson is 55. Obviously he’s getting the best care available. There’s cause for hope.

It would be a bad sign if he’s placed on a ventilator, though. An Italian doctor told the Daily Beast that in his limited experience only about 20 percent of patients with coronavirus survive that treatment. A UK study found that about a third who receive “advanced respiratory support” do. If you reach the stage where you can’t breathe on your own, the odds are against you. Fingers crossed that Boris doesn’t reach that point.

We’ll never know where he contracted it or when but I do wonder if his severe case is a function of the fact that top politicians are in close contact with so many people so often. One theory for why doctors and nurses seem to come down with more severe cases when they’re infected is because they absorb more of a viral load from patients they’re treating. Was Johnson more exposed to the virus than the average patient too?

“I am shaking hands continuously,” Mr. Johnson said at the start of March. “I was at a hospital the other night where there were actually a few coronavirus patients and I shook hands with everybody.”…

Mr. Johnson’s pregnant fiancée, Carrie Symonds, said she has also suffered symptoms of the virus. Most of Mr. Johnson’s team is back at work and Ms. Symonds tweeted at the weekend that she was now feeling stronger. Mr. Cummings isn’t back in Downing Street yet but is working.

Critics of the UK’s original laissez faire approach to the virus, which was reversed in mid-March after the latest death projections looked grim, are already speculating on political Twitter this afternoon that Johnson might have contracted the disease during that period of not taking it seriously enough. As for a possible successor if it comes to that, his cabinet would decide who succeeds him. Raab is no sure thing. He’s a committed Brexiteer but he has political enemies inside the government and isn’t as popular with the public as Chancellor Rishi Sunak is. Then again, since Raab was deputized by Johnson himself to lead cabinet meetings in his absence, maybe public opinion would rally behind him. Let’s hope it doesn’t come to that.

NEW: Dominic Raab releases statement saying he has been “asked to step in” for Boris Johnson. pic.twitter.com/li11wJOYQ8

Update: He’s vague on the details here but it sounds like two U.S. pharmaceutical companies have been dispatched to London to assist Johnson somehow. Are there any drugs here that aren’t already there, especially if the prime minister needed them in a pinch?

Trump begins the April 6 #TrumpPressBriefing by announcing he's dispatched "two of the leading companies, these are brilliant companies" to go to the UK and help treat Boris Johnson — but he never bothers mentioning their names pic.twitter.com/jfSJ3aM6pg