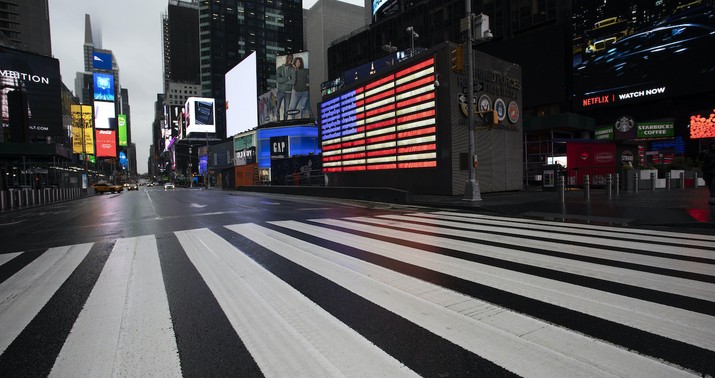 One month ago today, the story we were chattering about was whether Joe Biden would ride the momentum from his big win in South Carolina to a series of upsets on Super Tuesday.

One month later, I’m reading about crematorium operators in NYC asking families not to choose wooden caskets for their loved ones because there’s a backlog of corpses and wood takes too long to burn.

Choose cardboard, they say. It really moves the process along.

New York City crematories are so overwhelmed with the death toll from coronavirus cases that regulators are letting them operate 24 hours a day, seven days a week…

The deaths are straining services that cater to grieving families and the dead. Federal and local agencies have dispatched about 130 refrigerated trucks to serve as temporary morgues for hospitals around the state…

All Souls Crematory, at St. Michael’s Cemetery in Queens, now schedules up to 24 cremations a day, compared with about eight a day just a couple of weeks ago…

While burial requests have risen, too, some funeral and cemetery officials say there has been a disproportionate increase in cremation requests. Cremation makes sense for some people at a time when funeral homes and cemeteries are strictly limiting wakes and burials and when some people can’t attend ceremonies because they have an underlying medical condition or are in quarantine, they say.

Even 24/7 operation isn’t enough to cope. The furnaces can’t run constantly or they’ll break down. Some bodies are being sent to Westchester to handle the demand, with one crematorium there processing 38 bodies a day this week instead of its usual 12.

I wish I could say that New York State is already at the peak of daily deaths it expects. It isn’t, per the IHME projections. That’s still seven days away:

Note the number of deaths that were projected for yesterday, April 2. The actual number of COVID-19 deaths statewide per Andrew Cuomo was 562. The IHME model, which expects more than 93,000 American deaths in the next four months, is missing low on the death toll. Which is just what many experts assumed.

Other dark milestones are being passed:

A frontline doctor at a major NYC hospital told me he lost his first patient this morning to rationing of care — not enough ventilators to go around. The lack of supplies and testing is real — and costing lives — no matter what the daily reality show tries to sell you.

How bad are things in NYC? We all just got this. pic.twitter.com/JB9KJN1LYZ

And it's not just the severity, back to back.

We're all being asked to do things we've never done before.

Run a code as your goggles fog & you can't decipher the vital signs on the monitor.

Try to predict which COVID patient will crash if you send them home. And which won't.

Your hands upon theirs.

You think of their family. At home. Sobbing.

Someone starts saying a prayer.

You can't help but cry.

This isn't what we do.

You stand by. You wait.

This isn't what we do.

You stand by. You wait.

Three days ago, the Intercept reported that prisoners on Rikers Island are being offered six dollars an hour — a big wage by prison standards — plus personal protective equipment for a new job the city might have for them soon on Hart Island. The job: Digging mass graves, per a 2008 city plan for coping with with crush of bodies during a hypothetical pandemic. At its peak this month, New York State is expected to see 800-1,000 dead per day, most of that from New York City. Crematoriums can probably handle a few hundred. If there aren’t enough refrigeration cars to hold the rest, they’ll have to go somewhere.

What will be talking about a month from now?

I’ll leave you with this, a reminder of what a country that’s prepared to deal with an epidemic can do to hold down the human cost.

# of deaths from coronavirus: