Ohio Gov. Mike DeWine: Trump is right that we have to save our economy — which we’ll do by saving lives 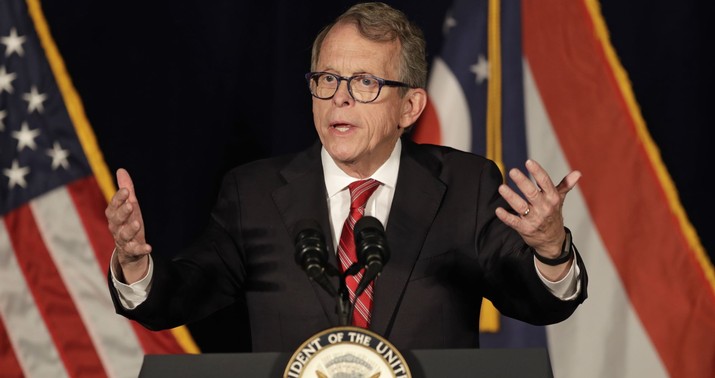 I don’t know whether to laugh or cry that DeWine feels he has to humor Trump by framing his argument here as a case of him agreeing with the president when he’s actually disagreeing with him strongly. Trump’s position is that an economic freeze of one or two months might exact a steeper human cost than a runaway coronavirus epidemic and a health-care meltdown would. Therefore, we need people to get back to work soon. Whether that means next week or three weeks from now, think in terms of a few weeks.

DeWine’s position: That’s goofy. We’re not going to tell people to get to work until we have a handle on the spread of this disease. To do otherwise would invite a human catastrophe and an economic catastrophe even greater than the one we’re enduring right now.

But he can’t say that in so many words. It might jeopardize Ohio’s ability to get resources like ventilators from the federal government; the president is plenty vindictive enough to punish Ohioans as a means of punishing DeWine. But even if he weren’t, DeWine still couldn’t speak plainly or else he’d risk hardcore Trump fans feeling like they have to choose between his directives and the president’s. If Trump says “go to work” and DeWine says “you’re going to get people killed if you go to work,” some people will go to work if only to show solidarity with Trump against the libs and RINOs. But if DeWine says “you’re doing what Trump wants by not going to work even if he says ‘go to work,'” well, maybe that makes it a little easier for them to stay home.

We all want the economy to start humming again ASAP, says DeWine. We’re all on the same page! If only:

I've been asked if I had a reaction to the President's statements yesterday. I think we are aligned. We want to get this over with ASAP. We want people back at work. The frustration he has, I share it. Each day we can't move forward is frustrating. We're all in this together.

If our hospitals are overwhelmed thousands of Ohioans will not get the care they need. If our nurses and doctors get sick, if they die because we do not have facilities to protect them, that is a personal tragedy for them and for all of us.

We are going to get our economy back, but we have to get through it, protect as many lives as we can, and then move forward. I'm looking forward to that day, but it's not yet here.

How many Republican politicians have taken Trump’s side in this developing argument? I’ve seen Trump fans on social media echoing the president that it’ll be time to go back to work soon, and of course his own economic advisors like Larry Kudlow and Stephen Moore are dutifully repeating his message. But it occurred to me after writing this post that there aren’t many GOP officials backing Trump up. The lieutenant governor of Texas went full death cult on Fox News last night and apparently John Kennedy has been heard grumbling that poverty kills people too, you know. But none of the people in the House and Senate whom you’d normally expect to rush to Trump’s aid when he’s under fire are rushing in this case. Maybe they’re too busy with the fiscal relief package. Or maybe they regard this as a level of Trump insanity even they can’t condone.

I was encouraged by his statement to Fox this afternoon that he’s hoping to have the country back to work by Easter, for two reasons. First, he didn’t set it as a deadline. It’s aspirational. Second, Easter is several weeks out, which means he’s already backing off the “next week” timetable. The more he delays this very bad decision, the harder politically it’ll be for him to make it. If New York looks like this today, imagine what it’ll look like in three weeks:

Density, it seems, is what’s cursed NYC to 10 times the number of infections that California is suffering. By Easter, it may be that there are well over 100,000 infected people there; assuming a death rate of one percent, that’ll be 1,000 dead per day, although hopefully the proverbial curve will already be flattening by then. Meanwhile, in Florida, Ron DeSantis is already getting shredded by Democrats and the media for moving too slowly to lock the state down. He’s the most visible proponent of Trump’s “don’t let the cure be worse than the disease” approach. If Florida ends up being overrun with infection in the next few weeks, he’ll be lambasted and every governor in the country will view him as a cautionary tale about half-measures. All of that being so, it’s much more likely that the mood of the country on Easter will be “We did far too little, too late” than “We overreacted.” And Trump really needs the mood to be “We overreacted” to get people excited to get out there, get back to work, and start passing that virus around again.

The lingering question in this debate is how he can believe that the human toll from an economic freeze of one or two months could be worse than the human toll from lifting social distancing measures before the spread of the virus has been meaningfully reduced. He’s right that the freeze will exact a toll: There will be suicides due to lost jobs, there’ll be alcoholism and drug addiction by people trying to cope, there’ll be nest eggs lost, on and on. It’s a genuine calamity. It’s just that we get all of that same misery in the “go back to work” scenario where the virus spreads, plus a mountain of deaths from the disease itself, plus a mountain of additional deaths from people who can’t get treatment at overwhelmed hospitals for non-COVID ailments. It’s an even bigger calamity. By what logical process does he arrive at a preference for the first option over the second? Charlie Sykes has a theory:

But Trump’s calculation may be different: he may feel that his reelection bid will be hurt more by a recession than by many thousands of deaths. Those tragedies can be blamed on the Chinese and they may take place predominately in blue states. He may think that he can create his own reality and shift responsibility for American deaths.

But the economy, he owns.

It is entirely possible that Trump may calculate that he can survive your grandmother’s death, but not another 10,000 point drop in the Dow.

Maybe. Although if he orders everyone back to work and everyone (or mostly everyone) ignores him, then he’ll say that he no longer owns the economy. Mike DeWine owns it. Andrew Cuomo owns it. They foolishly and selfishly insisted on avoiding a cataclysmic national epidemic by keeping people at home when Trump wanted them back to work. The sluggish growth in GDP once we’re past the first wave of this is therefore on them, not him.

I don’t know if Trump feels that he owns the economy so much as that he’s spent three years focused on “scoreboard” metrics like monthly job growth and the state of the Dow as yardsticks for his effectiveness as president and now he can’t see past them. He wants to be able to tell people again that the Dow is at its highest point ever and it’s all thanks to him. So he’s going to set whatever policies he needs to set in order to make that happen. If we all go back to work soon, some older (and younger) people may die but the Dow will begin growing again, won’t it? And it’ll keep growing even after millions of Americans are too sick to keep working. Won’t it?