Are people being too pessimistic about the longer-term impact of coronavirus? 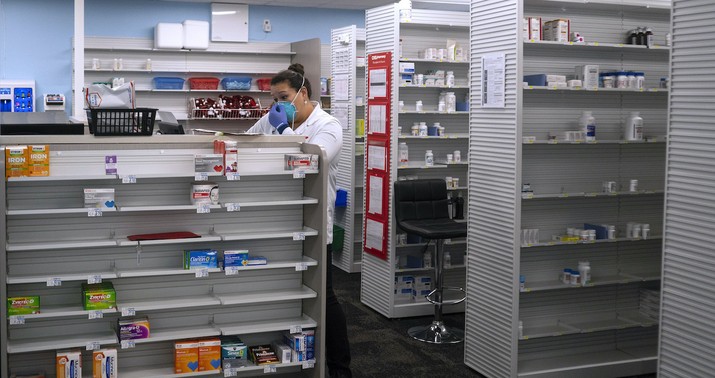 Yesterday in this post I imagined our situation as akin to standing on a train track with a train one thousand feet away and roaring right at us. At a moment like that, you don’t plan. You don’t think. You don’t game out strategy. You move. Right now we’re moving via massive social distancing. The problem is that the cost of moving — not even fully out of the way of the train, merely enough to avoid a head-on collision — is immense, burning vast amounts of wealth and untold numbers of jobs.

Worse, it’s not a one-time cost. If we move successfully out of the way of this first wave of the disease, we’ll find ourselves on a second track with another train just a little further away than the first one was. What do we do then? More self-maiming? Even if it works, at what point does the human toll from the economic pain outstrip the human toll from the epidemic?

Josh Barro makes the case that we’ll get better and smarter at dodging the second (and third and fourth) train, with less economic injury. As technology and industrial capacity catch up to what the country needs to limit the disease’s spread, massive self-isolation won’t be necessary. Hopefully.

[T]he nature of the disruption does not have to stay constant. It is necessary now to close schools and businesses, and tell people to drastically reduce social contacts in a way that is economically devastating to many businesses and workers. But there is a trade-off: The better we get at interventions to identify and isolate specific people with the virus, the less we should need to rely on interventions that isolate the entire population. That’s a reason the ramp-up of widely available testing remains such an important goal for the U.S.: More testing should, in time, allow for more normal living…

If an outbreak becomes widespread enough, it becomes impractical to conduct effective surveillance and isolation of an infected population that is simply too large to track. So my suggestion is not that if you dropped a massive testing capability into New York City today, it would be fine to reopen the Broadway theaters. But at some point, the massive shutdowns we are undertaking in much of the U.S. (and ought to be undertaking in more of it) should make it possible to sharply reduce the rate of new infections to a point where widespread testing and monitoring can become a cornerstone of a strategy to prevent uncontrolled outbreaks — if we actually have the capability to do such testing and monitoring. This would not mean a complete end to the need for social distancing measures, but it could allow for a reduction in their intensity.

In other words, we need to strive to become South Korea as quickly as possible. Many people who get sick and recover during the first wave of the disease will — hopefully — acquire a degree of immunity to the second wave. (Which is why some doctors claim that each “wave” of the disease should produce a flatter curve than the one before, provided we’re willing to reinstitute certain social distancing measures.) That will lessen the pressure to enforce widespread social distancing. Meanwhile, testing will become widely available — hopefully hopefully hopefully — soon, such that it’ll be easier to identify nascent outbreaks across the country and order more targeted isolation measures. The U.S. also needs masks, lots of them, since masks worn by an infected person can limit the odds that they’ll pass the disease on to others. Once surgical masks are plentiful (the more restrictive N95 masks are most urgently needed by medical personnel), it may end up as an informal social custom or even official CDC guidance that everyone wears one in public for the next year or two just in case they’re infected and don’t know it.

Put it all together and it resembles this theoretically, albeit on a population scale 100,000 times larger.

How one small town at the center of the outbreak has cut infections virtually to zero: test all 3,300 in town, isolate the 3 percent who tested positive. Infection rate 10 days later down to .3 percent. https://t.co/5Tgpa7cCgl pic.twitter.com/qlydmYJ0mM

4) Social distancing strategy. Can technology (i.e. temperature scanners) help? What activities can be made safer? What things can/can't we live without for >3 months?

Hopefully by working on ALL 4 FRONTS AT ONCE—plus economic stabilization—society can avoid the worst outcomes.

We’re not going to beat the disease until there’s an effective vaccine, which there won’t be this year. But if we can get our act together, we can turn catastrophe into a more manageable crisis.

Frankly, I think we should stop talking about a vaccine. It’ll come eventually, scientists are working on it, but we need effective medical intervention waaaaaaay sooner than the 12- to 18-month timeline for a vaccine. Antibody treatments and new antiviral drugs are the only games in town until next spring. A vaccine will blow up the train tracks but effective medicine can slow that train down to the point where contracting COVID-19 isn’t a possible death sentence. I’m not usually one for optimism in any situation, especially a situation as dire as this, but here’s an optimistic thought to cheer you: In the entire history of the world, it’s likely that there’s never been a scientific problem getting so much attention from so many talented minds across so many nations with so much advanced technology at their disposal as coronavirus is getting at this moment. A global Manhattan Project is under way in practice, if not in name:

Working at a breakneck pace, a team of hundreds of scientists has identified 50 drugs that may be effective treatments for people infected with the coronavirus.

Many scientists are seeking drugs that attack the virus itself. But the Quantitative Biosciences Institute Coronavirus Research Group, based at the University of California, San Francisco, is testing an unusual new approach…

If the research effort succeeds, it will be a significant scientific achievement: an antiviral identified in just months to treat a virus that no one knew existed until January.

“I’m really impressed at the speed and the scale at which they’re moving,” said John Young, the global head of infectious diseases at Roche Pharma Research and Early Development, which is collaborating on some of the work.

Some members of the group started studying coronavirus in January, when it was spreading in China. After evidence came back last month that the disease was spreading in California, members of the group threw their full weight at it. Per the Times, the task of identifying the cell proteins that the virus uses to grow would normally take two years. This group has managed it in a few weeks, with preliminary findings on drug treatments expected a few days from now.

If confirmed, this could be a breakthrough: It would be a blood test to determine who has had #COVID19 and thus probably has immunity. This would let us know the scale of asymptomatic infection and let us assign those with probable immunity to frontline duty. Bravo, researchers! https://t.co/LxnEJYpo7d

Of course, there’s a difference between “We’ve found a drug that seems to work” and “We’ve been approved to manufacture that drug for humans” and “We’ve now produced enough of that drug for everyone” and “That drug is now easily available to doctors” and “That drug is easy enough to administer that it’ll meaningfully reduce the load on hospitals.” For instance, remdesivir, the most promising antiviral drug, has been administered intravenously to test patients thus far, not as a pill. But the treatment process has to start somewhere. Imagine the jubilation globally when someone announces with solid evidence, “We’ve found a drug that seems to work.”

Exit question: C’mon, who among you can watch this and not agree that we’re going to get through this and eventually all be driving Lincolns someday?