Italian study: 99% of people who died from coronavirus had some other preexisting condition 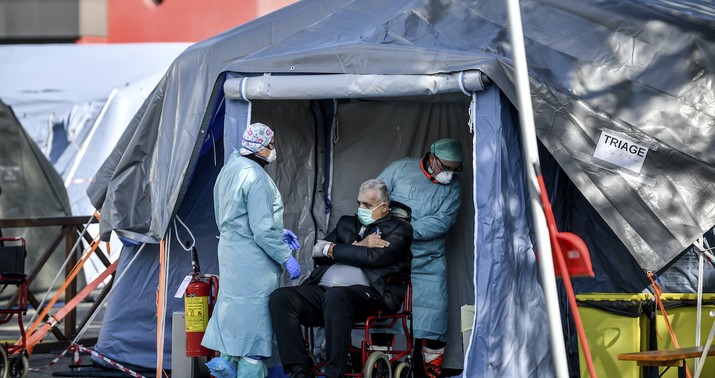 Clearly there’s an enormous cohort of people here and elsewhere whose interest in the human toll from this disease extends little further than their own personal well-being. They’re young, they’re healthy, they’re (probably) safe. End of discussion for them.

Per the latest numbers from Italy, it is indeed almost universally true that people who die from COVID-19 itself are old and/or suffer from some other malady. But a lot hangs on the definition of “malady.” The preexisting conditions some of the dead had weren’t severe diseases like cancer. They were fairly routine health problems in the U.S. like high blood pressure or diabetes.

The Rome-based institute has examined medical records of about 18% of the country’s coronavirus fatalities, finding that just three victims, or 0.8% of the total, had no previous pathology. Almost half of the victims suffered from at least three prior illnesses and about a fourth had either one or two previous conditions.

More than 75% had high blood pressure, about 35% had diabetes and a third suffered from heart disease.

The average age of those who’ve died from the virus in Italy is 79.5. As of March 17, 17 people under 50 had died from the disease. All of Italy’s victims under 40 have been males with serious existing medical conditions.

Not great news for a country like ours that famously has an obesity problem. And just because deaths from coronavirus skew towards the old and less healthy doesn’t mean that those outside the at-risk group are free and clear. Some younger, healthy people will need the increasingly scarce resource of hospitalization to fight off the disease. And doubtless some unknown number of completely uninfected Italians have died of causes that would have been treatable if not for the shortage of care at the moment.

But no worries, bro. Surf’s up.

MILLENNIALS ARE THE KEY: That's what Dr. Birx says. Today at #ClearwaterBeach, I asked many about social distancing and #coronavirus. They said it's important, but… pic.twitter.com/zrSUe5FauZ

Beaches in Miami were packed yesterday with selfish young idiots who refuse to deny themselves some spring break fun this year. Good thing Florida doesn’t have many old people.

Callousness among the young will cost them, not just their families. As I was writing this post, Trump’s coronavirus czar, Deborah Birx, warned about the latest data from Europe:

WARNING: There are concerning reports out of France and Italy of some young people getting seriously ill in ICUs. Dr Birx says it may be because millenials looked at data from China of coronavirus largely impacting older people. EVERYONE must head the guidance -NO large groups

According to new data out of China, it’s not true either that children are completely invulnerable to coronavirus. Most are — although they can pass the disease along, of course — but a Chinese study found that six percent of people under the age of 18 fall seriously ill. More than half of that six percent were age five or younger. As for younger adults who aren’t in the at-risk group, just because you’re highly likely to survive doesn’t guarantee you’ll function the way you used to before contracting the disease:

A Belgian doctor working to battle the coronavirus says he’s treated several seriously ill young patients — and their lung scans were “nothing short of terrifying,” according to reports.

Dr. Ignace Demeyer, who works at a hospital in Aalst, said an increasing number of people between the ages of 30 and 50 have presented with severe symptoms, despite having “blank medical records” that show no underlying conditions that would make them high-risk, the Brussels Times reported.

“They just walk in, but they are terribly affected by the virus,” Demeyer told the Belgian broadcaster VRT.

These are people who don’t smoke and don’t have comorbidities, he stressed. Meanwhile in the U.S., state governments are dusting off old plans on which factors to use in making hard ethical decisions about how to ration care. Some may want to prioritize patients who are front-line responders like medical personnel and cops; others may prioritize prognosis for recovery; comorbidities will matter; age may matter too. (Age will be a “tiebreaker” in New York state under current plans.) Could parents also receive priority? What do you do if a sixtysomething nurse with no children comes into the ER needing a ventilator at the same time as an overweight fortysomething dad with two kids? We’ll find out soon.

Here’s Jake Tapper yesterday, aghast at the fact that so many young adults are taking this in stride knowing the consequences to those around them.

Take it from a birdfarm sailor: Get our squids off the Roosevelt

And do it now

Biden: “It’s hard to envision” having a convention

Afraid of no reciprocation?