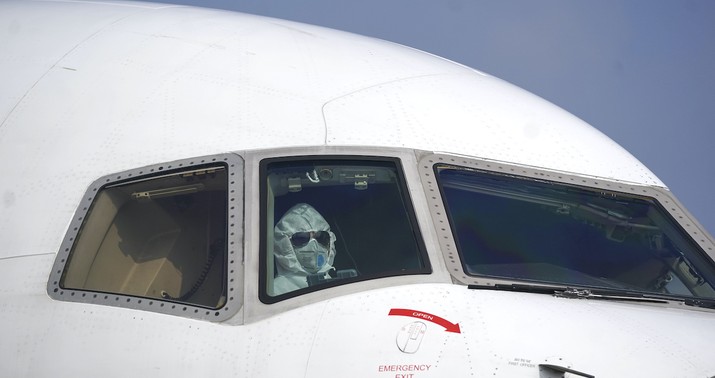 This is at least the third major error by HHS in the past few weeks that’s inadvertently increased the risk that the disease will spread inside the U.S. One was the flaw in the original coronavirus test kit that was sent by the CDC to local labs that produced inconclusive results, slowing down the speed at which patients could be accurately tested. The second was the CDC following guidelines for at-risk patients that were too narrow given the threat of community spread here in the U.S., leading to the situation last week in California in which a patient suspected of having the disease went days without being tested.

Now here’s a whistleblower claiming that employees from HHS’s Administration for Children and Families were sent to U.S. air bases to help process evacuees from China. The problem is that they’re not trained to do that. ACF deals with “supporting people recovering from natural disasters, such as floods and fires, and helping victims apply for temporary assistance,” per WaPo. Evidently they were repurposed for this task in the belief that coronavirus was an all-hands-on-deck situation for HHS, which it certainly is. But sending in employees without safety training — and without safety gear — and without thoroughly screening them afterwards for exposure to the virus before sending them on their merry way across the country obviously risks making the problem much, much worse.

The senior HHS employee claiming all of this says she was reassigned recently in an obvious act of retaliation for sounding alarms about it. Either she’s lying now to prevent that reassignment and this is the most cynical false report of official wrongdoing in modern American history or she’s telling the truth and HHS is trying to suppress information that its own negligence may have contributed to community spread of coronavirus inside the United States. That’s not a pure hypothetical either: Right now the CDC is trying to figure out how a woman in Solano County, California, contracted COVID-19 despite not traveling to China or knowingly coming into contact with anyone who was sick. But one of the air bases where ACF was sent, Travis AFB, is located in Solano County. There’s now a possibility that an ACF employee contracted the disease during their ill-prepared encounter with the evacuees, remained asymptomatic, then went out into the local community and unwittingly spread it.

The staff members were sent to Travis Air Force Base and March Air Reserve Base and were ordered to enter quarantined areas, including a hangar where coronavirus evacuees were being received. They were not provided training in safety protocols until five days later, the person said.

Without proper training or equipment, some of the exposed staff members moved freely around and off the bases, with at least one person staying in a nearby hotel and leaving California on a commercial flight. Many were unaware of the need to test their temperature three times a day…

The whistle-blower said they complained to Charles Keckler, an associate deputy secretary at Health and Human Services, in an email on Feb. 10. After the email, the complaint said, top officials, including Lynn Johnson, the assistant secretary for the Administration for Children and Families, “admitted that they did not understand their mission,” and that her agency “broke protocols” because of the “unprecedented crisis” and an “‘all hands on deck’ call to action” by Dr. Robert Kadlec, the top official for public health emergencies and disasters.

Supposedly when staffers complained to higher-ups about health concerns, they had their “mental health and emotional stability questioned” and were accused of not being team players who were bad for morale. Alex Azar, the head of HHS, was grilled about this by a Democrat yesterday and said he wasn’t aware of any violation of quarantine or isolation protocols, but according to the Times there isn’t even a uniform set of protocols within HHS. The CDC follows one set of guidelines, other parts of HHS follow another.

WaPo has more details from the whistleblower complaint:

The workers were in contact with passengers in an airplane hangar where evacuees were received and on two other occasions: when they helped distribute keys for room assignments and hand out colored ribbons for identification purposes…

After their deployments, the workers returned to their normal duties, some taking commercial airline flights to return to their offices around the country, the lawyers said…

Some workers expressed concern about the lack of protective gear to the ACF team leader on the ground. That person joined ACF in September and had “no training or experience in any federal emergency management, public health emergency response, or safety or operational protocols to run the mission,” the complaint states.

The whistleblower’s lawyers claim she received two HHS awards last year from Azar and has the highest performance evaluations. We’ll see. Bear in mind, the CDC didn’t even want some of these evacuees back in the United States. After 14 of the passengers from the Diamond Princess cruise tested positive for coronavirus shortly before they were due to fly home, the State Department decided to let them board and segregated them from passengers who weren’t sick via some sort of plastic enclosure. The CDC objected so vehemently that they insisted the agency not be included on the press release afterward explaining the decision to let the infected patients board.

Why were ACF employees involved in the first place? Are we so unprepared even when the number of infected Americans is in the dozens that we can’t mount a professional containment response? Maybe not: A top official in the State Department’s medical services bureau told a House committee today that he was personally part of various coronavirus evacuation missions and never once saw someone operating with less than adequate protective equipment. It’s worth noting, though, that WaPo has a source separate from the whistleblower who claims objections were raised within HHS itself to sending the ACF people to handle evacuees. And a second source admits that they weren’t tested for COVID-19 afterward, as the protocol at the time was to test only if they showed symptoms.

This won’t be the last damaging leak related to coronavirus. The Times reported earlier today that government scientists and health officials are now being told to route all public messaging through Mike Pence’s office. That’s supposed to ensure that everyone’s on the same page and not contradicting each other in public. But thus far it’s Trump and cronies like Larry Kudlow who are contradicting the doctors with happy talk more so than the doctors are contradicting each other, for the obvious reason that the president has developed a complex about the day-to-day fate of the stock market. He’s spent the last few years insisting that we owe our record-breaking Dow to him; if the Dow tanks, as it’s been doing all week due to pandemic fears, that idea of an invincible bull market sustained by Trump’s leadership melts away. Which makes me think the gag order being imposed on scientists isn’t to guarantee message coordination so much as it’s to guarantee that no one says anything truthful but alarming that sends the Dow down further and gives Trump another election-related panic attack in the process. There’ll be more leaks to the media if bad news that the public needs to know is being bottled up for electoral reasons. Exit quotation: “Dr. Anthony S. Fauci, one of the country’s leading experts on viruses and the director of the National Institute of Allergy and Infectious Diseases, told associates that the White House had instructed him not to say anything else without clearance.”