Poll: Trump leads all Democrats in Wisconsin — and trails all in Michigan and Pennsylvania 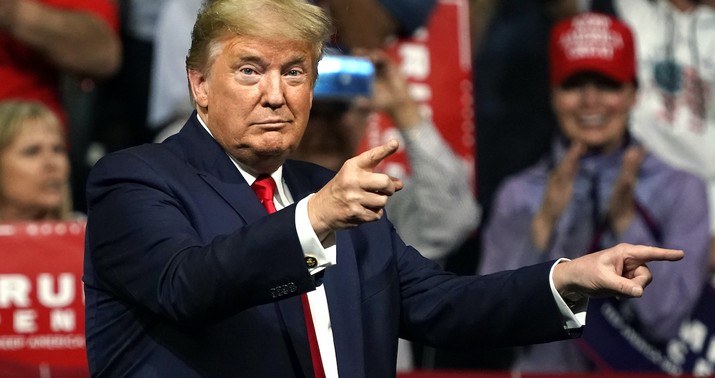 He won 306 electoral votes four years ago (officially 304 since two faithless electors broke ranks). Twenty of those came from Pennsylvania, 16 came from Michigan. If you flip those two states and only those two states from red to blue this fall, you end up with…

270-268. A Trump victory by the thinnest possible margin.

But wait. Maine and Nebraska award a single electoral vote to the winner in each of their two congressional districts. Steve Kornacki remembered that Trump barely held on in Nebraska’s second district (which encompasses Omaha) in 2016, taking it 47/45. If Dems were to flip that too, we’d have a 269-269 clusterfark to end all clusterfarks.

The odds of that happening in the actual universe must be hundreds or thousands to one. The odds of it happening in the funhouse-mirror virtual reality we all live in now? One hundred percent. There’s no doubt that this garbage simulation is hurtling us towards the cartoon political drama of a tie for the presidency. Quinnipiac’s just the first see to it coming in its new polling out today.

The good news? Wisconsin is basically a red state now. The bad news? It’s the only one of the three that appears to be so.

In Wisconsin Trump leads each of the top six Democratic contenders by no less than seven points and enjoys a double-digit lead against Warren and Klobuchar. Different story in Michigan, where he trails Biden by four and Sanders and Bloomberg by five. And he’s got work to do in Pennsylvania, where he’s six points behind Bloomy and eight points behind native son Joe Biden. What explains the difference between Wisconsin and the other two in terms of Trump appreciation? One possibility is race: Wisconsin is 87 percent white and just seven percent black, noticeably different from Michigan (79/14) and Pennsylvania (82/12). Democrats are holding their convention in Milwaukee this year to make amends for Hillary’s infamous absence from the state in 2016 but the irony is that it may be off the board for them. They’re better off targeting MI and PA and trying to flip some other red state, possibly North Carolina or elusive Florida.

What about electability, though? How does the current Democratic frontrunner, whose socialist dogmatism supposedly makes this race unwinnable for him, stack up against the rest of the field? Not bad, actually: Bernie does as well as Biden does in Wisconsin, with each trailing Trump by seven, and a point better than Biden in Michigan, leading Trump by five. But in Pennsylvania he leads Trump by just four points, half of Biden’s margin and worse than Klobuchar and Bloomberg. Even Pete Buttigieg is as competitive with Trump in PA as Bernie is. And none of those candidates will provide Republicans with as much attack-ad material this fall as Sanders will.

Well … maybe Bloomberg. But who would notice Trump’s ads against him when Bloomy will be running anti-Trump ads at a clip of 20 to one or whatever?

Speaking of Democrats and electability, here’s what the RCP poll of polls looks like right now in South Carolina. That’s supposed to be Biden’s firewall, the state where he’ll win big and prove his strength with black voters, but … hoo boy. At the moment it looks more like Biden’s Alamo.

The last two polls taken there have showed Sanders within two of the lead or tied for it with Biden. Any guesses what’ll happen in next week’s polls if/when Bernie wins Nevada convincingly on Saturday?

At least Bloomberg will still be around on Super Tuesday, ready to stop Sanders cold. Or he would have been, if he hadn’t been fileted on national television last night at a debate a *lot* of Democrats watched. Exit quotation:

HUGE #'s for the #DemDebate last night. Looks like 19.7 million on NBC and MSNBC combined. Final # may fluctuate a bit, but it's a new record high for a Dem debate, beating last June's.