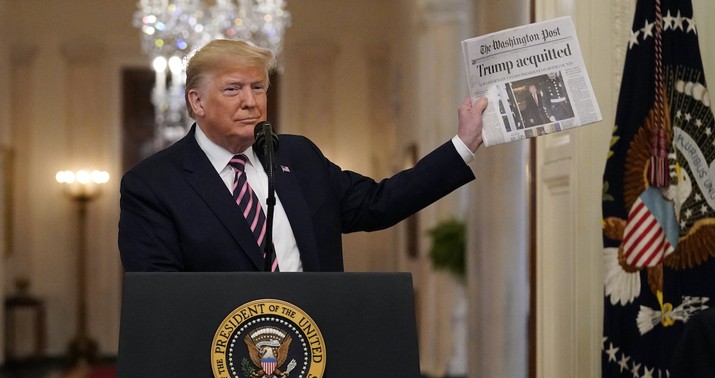 Just beaming this out there for any moderate Democrats who might be reading, in case they’re not depressed enough yet about their election prospects in the midst of Berniemania. I like to imagine them gazing at these numbers at the very moment during tonight’s debate that Joe Biden has forgotten his name or Mike Bloomberg has accused everyone in America who makes less than $250K a year of being a moron.

The last time he was at 46.0 percent approval in the RCP poll of polls was February 4, 2017, exactly 15 days into his presidency. That was the honeymoon period with voters after inauguration. It took an impeachment in the House and a bipartisan removal vote in the Senate to return him to 46 percent. Not only that, but at 51.1 percent, his disapproval rating is the lowest it’s been since December 2018. If it falls another tenth of a point to 51.0, it’ll be his lowest mark since April 2017.

With the economy booming and Trump climbing into polling territory that makes reelection perfectly plausible, it seems like the right moment for Democrats to roll the dice on a 78-year-old socialist with heart trouble.

Here’s what’s happened to Trump’s numbers over the past six months:

You can see that he was on his way up towards 46 percent in September — until the Ukraine quid pro quo exploded in the media and popped his bubble, sending him sliding all the way down to 41.6 in October. Then in November the Ukraine news shifted from the newspapers to Adam Schiff’s Intelligence Committee and Trump’s numbers started climbing again. He was back at 44 percent within a few weeks and remained there, scoring 44.5 percent on the day he was impeached in December. He touched 45 percent in early January as the Senate trial loomed and remained between 44 and 45 percent all month — until now, when he finally reached 46 percent.

My default assumption with good polling is that it’s the economy, stupid. But impeachment seems clearly not to have hurt him, and having the matter finally behind him may be nudging his approval upward lately. FiveThirtyEight conducted its own polling on impeachment over the past few weeks and found that all three partisan groups — but especially Democrats — grew more convinced that it was a bad use of time and less convinced that it actually hurt Trump politically:

The share of Republicans who thought that Trump and the congressional GOP handled the impeachment process well grew considerably over time as well. That may also help explain the uptick in overall job approval. It’s not just Trump-skeptic independents, say, who have softened a bit on him thanks to job growth, it’s the small cohort of anti-Trumpers left in the GOP possibly shrinking even further in the aftermath of impeachment.

I don’t know, maybe there’s a silver lining for moderate Democrats here after all. If you’re destined to lose to Trump this fall no matter who you nominate, you’re better off nominating Bernie and letting socialists take the fall. When Sanders gets spanked, centrists will use his defeat for the next 20 years as Exhibit A in the case that hard-leftists can’t get elected. If there’s to be a sacrificial lamb in November, might as well sacrifice the DSA.

In honor of Trump’s big polling milestone, here’s a well-known supporter expressing his admiration for the president.

Watch: Acosta Tries Mansplaining Trump’s Wuhan Virus Timeline to Dr. Birx, and Trump Wasn’t Having Any of It

Brit Hume shares old video clip from Dr. Fauci that every lib critical of Trump should be forced to watch

“[B]at coronaviruses were studied in Wuhan at Biosafety Level 2, ‘which provides only minimal protection’…”

Maybe he can ask Trump personally?

Experts wonder: Where is the White House getting its estimate of 240,000 deaths?

The study that prompted the first county-wide shutdown in the U.S. (plus California’s testing backlog)

University of Pittsburgh: We might already have a vaccine — and a safer delivery method, too

“Doing these shows one by one, doing interviews selectively strikes just the right tone.”

Truth is stranger than fiction

Wisconsin Gov. Evers calls for election to be postponed

“It’s been a cataclysmic failure.”