It’s time to think about reducing the deficit, says Pete Buttigieg. Wait, what? 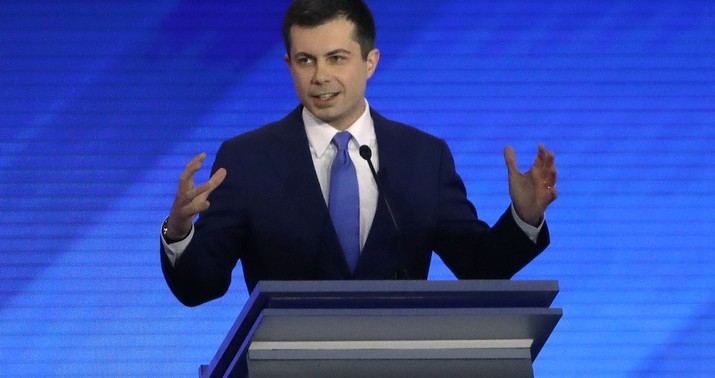 Unexpected. So much so that we’re left to wonder what game he’s playing at here, particularly in light of the timing. Trump’s new budget proposes cuts to Medicare and Social Security, a fact that Democrats will feast on politically all this year. That being so, the last thing they’d want in a nominee, one would think, is a guy who’s also calling for belt-tightening.

No matter how right he might be on the merits.

Asked at a town hall here how important the deficit is to him, Buttigieg said it’s “important” and vowed to focus on limiting the debt even though it’s “not fashionable in progressive circles.”

“I think the time has come for my party to get a lot more comfortable owning this issue, because I see what’s happening under this president — a $1 trillion deficit — and his allies in Congress do not care. So we have to do something about it,” Buttigieg, the former mayor of South Bend, Indiana, said in a packed middle school gym, drawing cheers…

“It’s not fashionable in progressive circles to talk too much about the debt, largely because of the irritation to the way it’s been used as an excuse against investment. But if we’re spending more and more on debt service now, it makes it harder to invest in infrastructure and health and safety net that we need right now,” he said. “And also this expansion, which I think of as, by the way, just the 13th inning of the Obama economic expansion. It isn’t going to go on forever.”

No matter how grossly unjust it would be for the GOP to lay claim to that title.

My instinct is that Buttigieg is just following his political rebranding here to its obvious conclusion. He began the race as a basically dogmatic progressive (and remains one deep down, no doubt) but wised up after Elizabeth Warren started rising in the polls and realized that there wouldn’t be room in the left lane of the primary with her and Bernie both in contention. So he shifted right, believing — shrewdly — that Biden might ripe for a calamitous fall as the campaign wore on and expecting that Klobuchar wouldn’t get traction in polling. Biden is fading but still alive in the early states right now while Klobuchar has come on in the past few days after her winning debate performance on Friday night, which means there’s momentarily a three-way fight to become the champion of centrist Democrats — with Mike Bloomberg set to make it a four-way fight in a few weeks. Mayor Pete’s just showing how far he’s willing to go to out-centrist the rest with his deficit comments.

And of course, by insisting on fiscal responsibility, he’s underlining the blowout deficits that Bernie Sanders’s agenda would saddle America with.

But wait. That can’t be his strategy. Yeah, fine, Buttigieg has made a bold gesture here to show how moderate he is, but it’s possible to be too moderate for the electorate’s tastes. Embracing deficit reduction in a Democratic primary to set up a contrast with Bernie’s domestic policy is a bit like embracing a nuclear strike on Iran to set up a contrast with Bernie’s foreign policy. Even if Pete frames the issue in more Democrat-friendly terms, by emphasizing tax hikes to close the gap between revenue and expenditures instead of spending cuts, he’s still aligning himself with an idea famously championed — if not implemented — by right-wingers. Even if he wins the nomination, he’ll need progressives to turn out next fall. Will they after this?

I think his deficit spiel may be a short-term strategy that he’ll abandon in due course, as circumstances require. I’m thinking back to this CNN story from two weeks ago, shortly before Iowa went to vote:

Pete Buttigieg will close out his campaign in Iowa focusing on his ability to win over disaffected Republicans who backed President Donald Trump in 2016, his campaign tells CNN, hoping that Democrats who are hellbent on defeating Trump in November will be wooed by a candidate who can eat into the President’s support…

Conversations with dozens of voters reflect that this strategy could be successful for the former mayor. Voters who backed Trump in 2016 but are considering backing Buttigieg in 2020 tell CNN that they were drawn to the fact he is a veteran, openly talks about his faith and appears to have an integrity they believe is lacking in the White House.

He did okay with that approach on caucus night. And he has a reason to double down on it in New Hampshire since NH allows independents to vote in either party’s primary on Election Day. Fully 42 percent of the state’s electorate is unaffiliated with either party and there’s no competition on the Republican side this year to draw right-leaning indies away into the GOP primary. Buttigieg is hoping/expecting that conservative independents will turn out to vote in the Democratic primary tomorrow night and decide to opt for the most centrist choice on the menu in the name of defeating socialism. Chattering about deficit reduction is bait to those people.

Exit question: Could Buttigieg’s deficit talking points be his way of claiming Obama’s legacy, something he’s been eager to do throughout the primary as a young midwestern pol who’s long on cerebral charisma and short on actual legislative achievements? O had mammoth deficits in the thick of the Great Recession but the tea-party wave in Congress and the slow economic recovery cut those deficits in half by his second term. “I’m a fiscal conservative like Barack,” Buttigieg might say, inducing aneurysms in conservatives everywhere. Or, better yet, “I’m more of a fiscal conservative than Donald Trump.” Which may well be true.

'Oh FFS!' Justin Trudeau picked a pretty bad time to remind people to turn everything off and celebrate #EarthHour