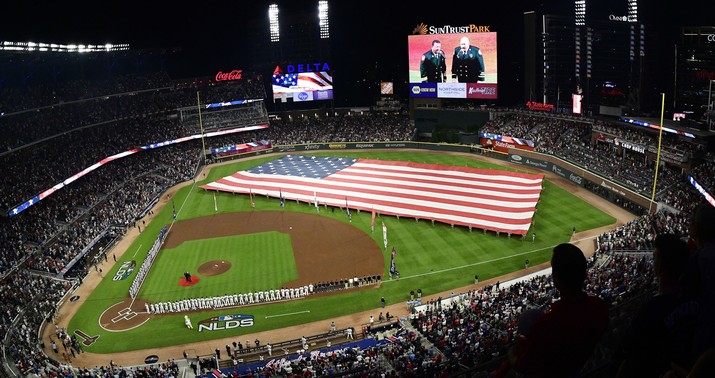 I thought the video of the Korean mom would be the saddest thing I posted today, but no.

Somehow this is even more pitiful.

The standard observation online whenever MLB execs haltingly propose another lame rule change, only to quietly let it drop when the public lambastes them for it, is to say that they secretly hate baseball. That’s not true. The truth is that they find baseball boring and know that many, many American sports fans do too, and so they’re forever grasping for ways to manufacture excitement. What if … we let teams start extra innings with a man already on second? What if … we let managers pinch hit any player on the roster if they’re trailing in the ninth inning, even if that guy’s already been removed from the game?

The latest proposal starts off grounded in basic good sense. What if … we expand the wild-card round to best of three instead of a one-game winner-take-all? A fine idea! The one-and-done format is bizarre for a sport that plays a famously long season. Measuring excellence in baseball requires large sample sizes. And what if … we also expand the number of playoff teams from five to seven? That wouldn’t be terrible either. It’ll introduce more weak teams into the playoffs, granted, but MLB wouldn’t be the first sport to make that sacrifice in the name of boosting fan interest down the stretch and increasing the potential for exciting postseason upsets. More teams in the hunt means more eyeballs watching, even if it guarantees more mediocre squads sneaking into the World Series occasionally by virtue of a well-timed hot streak.

And what if … we let teams pick their postseason opponents on some sort of cheesy TV event that sounds like a hybrid of the NFL draft and Selection Sunday?

In this [seven-team] concept, the team with the best record in each league would receive a bye to avoid the wild-card round and go directly to the Division Series. The two other division winners and the wild card with the next best record would each host all three games in a best-of-three wild-card round. So the bottom three wild cards would have no first-round home games.

The division winner with the second-best record in a league would then get the first pick of its opponent from those lower three wild cards, then the other division winner would pick, leaving the last two wild cards to play each other.

To use the AL last season as an example, the Astros with the best record would have received the bye. The Yankees, with the second-best record, would have had the choice to pick from among the Rays, Indians and Red Sox. Boston had the worst record of that group. Would the Yanks pick them or avoid the baggage of a series with their rival? It would create a ton of strategy and interest, and this is what MLB wants to sell. The Twins would then pick next as the other division winner, and then the A’s with the best wild-card record would play the team not chosen by the Yankees or Twins.

The plan is to have this all play out on a show on the Sunday night the regular season ends and have representatives picking teams on live TV — think the NCAA selection show, but just with the teams making the selections. The rights to that show is part of the enticement to potential TV partners.

If you asked them why they like this idea, I assume they’d blather at you about “match-ups” and strategy and so forth. If your top three starters are lefties and one of your potential opponents has a lefty-heavy line-up, well, then you might rationally choose them and trust that the odds will carry you through the wild-card round and into the LDS.

But that’s not the real reason they like it. They like it because of the disrespect inherent in being chosen as an opponent by a superior team. No one cares about a Twins vs. A’s wild-card round. But if the Twins choose the A’s then Oakland fans can get indignant at the insult, adding some dopey drama and extra motivation to win. I can picture commissioner Rob Manfred presiding at the selection show, watching the Twins’ GM choose Oakland, and then Manfred turning to Billy Beane and saying, “You gonna take that sh*t?” (Based on their recent playoff history, the A’s would indeed take it.)

They’re trying to inject a note of WWE into our normally very dull national pastime, basically. They might as well force players from each team to give insane smack-talking interviews about the opposition before the game. Show me Clayton Kershaw in a Randy “Macho Man” Savage bandana and sunglasses calling the Braves a bunch of candy-asses before he goes out and gets shelled in another big playoff spot. Entertain me for once.

A bench-clearing brawl in every wild-card series. Imagine it.

I don’t know, maybe it’s a good idea after all? I’m talking myself into it. Baseball in the age of sabermetrics and “three true outcomes” and blatant cheating is unwatchable dreck. Maybe Macho Man is their only hope. Tell ’em what’s up, Mike Trout: