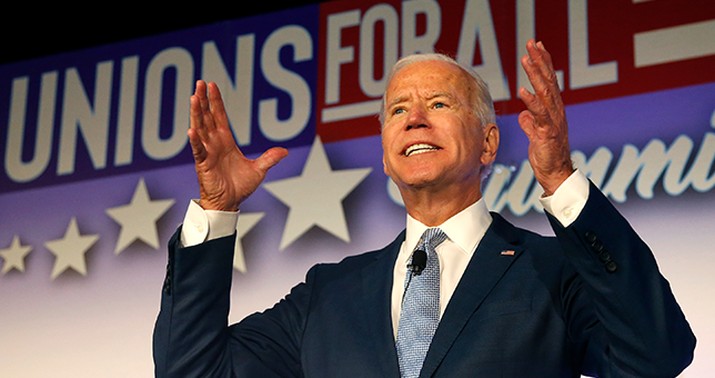 He would have been okay finishing second in Iowa to Bernie. He even would have been okay-ish finishing third behind Bernie and Warren. Either result would have set Biden up to deliver this sales pitch to the rest of the Democratic electorate: “You now have a clear choice between pragmatism and socialism, between electability and purity. I’m the only electable pragmatist left in town. Choose.”

But finishing behind Buttigieg, as he’s certain to do, deprives him of that argument. Biden needed a result that would let him frame the coming primaries as a referendum on Sanders, with Joe the obvious beneficiary of the “Not Bernie” vote. For the moment, he can’t do that. And if New Hampshire and Nevada don’t give him a way to do it, Mike Bloomberg is waiting to step into Biden’s shoes and make that argument instead.

Here’s a handy visualization of the last five polls in New Hampshire. Pay close attention to the trends and the dates, bearing in mind that Iowa voted on February 3 and that it was reasonably clear even amid the Democrats’ vote-counting clusterfark that Biden hadn’t done well.

Things to consider when looking at poll volatility in #NHPrimary:

Biden’s a clear number two — until yesterday, when the Emerson and Suffolk polls started picking up post-Iowa reaction in New Hampshire. Suddenly Grandpa Joe is either tied with Buttigieg or trailing him with a dismal 13 percent. Either way, his vote share has ticked down noticeably in the past 48 hours. An obvious possibility: Moderate Dems in NH who had thought Biden really was the only centrist game in town now have reason to reconsider that, with some of them shifting to Mayor Pete as the Great Anti-Socialist Hope.

Freeman and Morgan agreed that Biden needs to finish in the top 3 in New Hampshire and ideally as the top moderate. That reflects what had been the quiet hope of Biden’s team heading into Monday’s caucuses. They didn’t necessarily expect to win outright. But they hoped that they could emerge from Iowa as the clear alternative to Sanders, a democratic socialist and leader of the left’s progressive base.

An effectively two-person race between Sanders and the former vice president, Biden confidants believed, would open the financial spigot, firm up his advantages among nonwhite voters and win over skeptical white moderates now aligned with Buttigieg or Klobuchar.

We do not have a two-person race at the moment and the New Hampshire polling suggests we won’t have one after next week’s vote. We might have one after Nevada the following week: That’s when the state electorates start turning more diverse, with a large Latino minority sure to participate in the Democratic caucus there. The last poll taken of the state in mid-January showed Biden and Sanders neck-and-neck with Buttigieg stuck in single digits. That’s a golden opportunity for Biden to reestablish himself as essentially the only true alternative to Bernie in the race. But Buttigieg is likely to stick around now, encouraged by Iowa and New Hampshire. And his strong showings there might get him a little momentum in Nevada.

If Mayor Pete were to finish ahead of Biden in Nevada I think Joe would be on the cusp of total collapse. He might win South Carolina anyway due to his strength with black voters but I think he’d need to do it convincingly at that point to have it matter. Even if he did, his weakness in whiter states would point to a long campaign and the rising possibility of a contested convention. He doesn’t have many chances to try to clear the field of centrist opponents and he’s already blown one. And consider this: Given the high likelihood that Klobuchar will drop out next week after finishing fifth in New Hampshire plus the fact that it looks like lots of Amy supporters switched to Pete before the final alignment in Iowa a few days ago, Klobuchar’s loss could be (mostly) Buttigieg’s gain in Nevada.

Team Biden assured donors this morning on a conference call that they’re going to win Nevada and South Carolina, which is probably half-true at least. But the poor showing in Iowa has some wondering if his organization is up to snuff:

[M]any Iowa Democratic insiders had warned for months that Biden did not have the kind of campaign they’d expect of a national frontrunner and anticipated a poor showing. Into the fall, the campaign’s state director, Jake Braun, did not live full time in the state.

Biden’s campaign also had a less robust internal data operation across the state, leaving them flat-footed on caucus night and unable to efficiently gather data from precinct captains, a source familiar with his team’s operations said.

Iowa Democrats say Biden’s operation was run with a sense of entitlement, with many potential supporters and activists feeling brushed aside. The campaign ultimately lost the endorsement of a state senator, Tony Bisignano, who supported Biden in his last two bids, but switched to supporting Buttigieg after he felt ignored by the Biden campaign.

He did fewer daily events in the final weeks before the vote than Buttigieg did and “there was rarely a sense of overflowing enthusiasm” at them, per Bloomberg News. Meanwhile, Politico reported a week ago that his operation in New Hampshire is smaller than that of some of his rivals and that he hadn’t run any ads on TV there since New Year’s. That was strategic since New Hampshire is Bernie country and Biden understandably wouldn’t want to waste scarce resources there in a futile attempt to win when he could finish a comfortable second instead. But the problem post-Iowa is that he might not finish second after all, and if he doesn’t it’ll be received as another bad omen. So a pro-Biden Super PAC is about to unload nearly a million bucks in new ad spending to try to keep him competitive. If it doesn’t work and he finishes third or — gulp — fourth, the “do or die in Nevada for Biden?” media coverage will sprout like weeds.

Consider all of this a backdrop to Jazz’s post earlier about the South Carolina GOP launching an “Operation Chaos” endeavor to try to benefit Bernie at Biden’s expense in their upcoming primary. If that were successful, it really would finish Biden off and put Republicans in roughly the same position as Democrats were in May 2016 when they started popping the champagne at getting to face an “unelectable” populist outsider like Trump that fall. I’m sure it’ll all work out. Exit question: This story from Politico finds little appetite among Senate Republicans for committee investigations of the Bidens and Burisma in the wake of Joe’s Iowa debacle. Any theories why? We’ve been reliably assured that the president’s interest in pressuring Ukraine was about exposing corruption, not about helping himself in the upcoming election. If that’s true, electoral results should have no bearing on the GOP’s interest in pursuing Biden. Really weird.