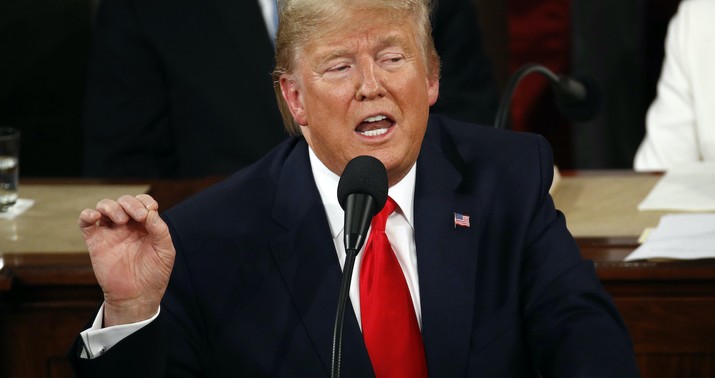 A friendly reminder amid all the impeachment hubbub today that Trump’s probably getting reelected and the political shiny object du jour will have little or nothing to do with his odds.

Neither the Reagan era nor the Clinton era, both famous boom times for America, produced quite as much financial optimism as the Trump era has. Remember that other poll that Gallup released yesterday showing Trump’s job approval at a personal best 49 percent? Now we know what’s driving that number. With economic enthusiasm like this, if Trump were a little less … Trump-y his job approval might be north of 55 percent. He’d be a near-lock for a second term.

But there’s more. Gallup also asked a question with lots of resonance for the 2020 election: Are you better off financially then you were a year ago?

Nearly six in 10 Americans (59%) now say they are better off financially than they were a year ago, up from 50% last year…

The current 59% of Americans who say they are better off financially than they were a year ago is essentially tied for the all-time high of 58% in January 1999. That was recorded during the dot-com boom, with conditions similar to the current state of the economy — a stock market rocketing to then-record highs and unemployment at multidecade lows — though GDP growth was higher at that time.

In January 2017, right as Trump was assuming office, 49 percent of Americans said they were better off financially than they’d been the year before. He’s added 10 points to that number. When he inevitably asks voters this fall if they’re better off than they were *four* years ago, “yes” will be a common reply. And it’s not a purely partisan thing. Among Democrats, 43 percent say they’re better off now than they were last year and 60 percent expect to be better off next year. Good luck convincing people to change horses in the middle of that stream.

Trump’s getting reelected easily, argues Becket Adams today at the Examiner. “Easily” is further than I’d go, but yeah, I wouldn’t bet against him at this point. Especially with Biden starting to circle the drain after Iowa.

Trump has a money advantage, a unified party, excellent polling numbers, and a booming economy. He commands total loyalty from a fanatically enthusiastic base, and he is a gifted, tireless campaigner. Most importantly, however, the president’s Democratic opposition is hopelessly dysfunctional and incompetent, beset on all sides by bitter infighting, unfocused messaging, toxic identity politics, and a total unwillingness to understand what motivates the president’s support.

Democratic dysfunction, probably more than anything else, is what will win Trump a second term in office. Their general ineptitude, coupled with the likelihood that Democratic leaders back a creature of the establishment to lead a halfhearted, poorly executed challenge to the president’s reelection campaign, will make it such that Trump will have to try to lose in November.

Yeah, but he will try. That’s the thing. There’ll be many “WTF?” Trump moments between now and November, possibly one or two on the scale of the Ukraine business, most petty but irksome and damaging in a death-by-a-thousand-cuts way. In a bad economy, they’d be fatal. In an economy in which people are high-fiving over jobs numbers, probably not. But the race will be closer than it should be.

Which is not to say it’ll be as close as it was last time. He’s at 51 percent odds of reelection in PredictIt’s probability market as I write this on Wednesday afternoon.

David Frum makes a trenchant point about the new Gallup data, but I don’t know if his conclusion follows either:

Right, “historic economic boom” isn’t the political soil you usually think of as optimal for a socialist revolution to flower, but I’m trying to imagine the voter who’d gamble that boom on something as intangible as “ethical renewal.” If we switch to Biden and the economy slides, what lesson will swing voters learn about the relative value of “norms” and clean(er) government? Bernie at least has an argument that the economy, while booming, isn’t doing enough for people at the bottom, that gains from growth are captured by the class that least needs them. Biden’s argument is “we’re going back to 2015,” which is … not an improvement. Not economically, at least.

“If China’s leaders are willing to stop telling lies about us, we can pause pointing out the most embarrassing truths about them.”

President Trump sends letter to Sen. Chuck Schumer: 'I never realized how bad a Senator you are'

“…he had lost the ability to speak.”