Trump’s best poll ever: 49% job approval, according to new survey from Gallup 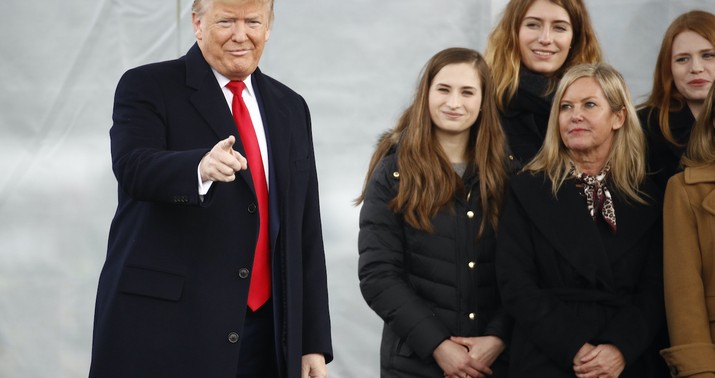 Quite a trifecta of headlines Democrats are waking up to this morning, on a day when they were expecting to crown a new frontrunner for president:

At least they haven’t had to endure this one yet: “SANDERS WINS CAUCUSES, SIGNALING SOCIALIST TAKEOVER OF PARTY.”

But the day is still young, isn’t it?

Not only is that the best number he’s ever posted in Gallup, it’s a tick better than his current number in Trump-friendly Rasmussen, which has him at 48/50 as I write this. Maybe this is an outlier or maybe it’s the start of a trend, but reading through Gallup’s analysis of the data it strikes me that this is probably the single best poll for Trump I’ve ever seen. He’s at 63 percent on handling the economy, which is not only his personal best but the best number posted by any president in nearly 20 years. A majority approves of the Soleimani strike and 52 percent support acquittal by the Senate versus 46 percent who favor removal. It’s bleeding over into party popularity, too:

Now, 51% of Americans view the Republican Party favorably, up from 43% in September. It is the first time GOP favorability has exceeded 50% since 2005.

Meanwhile, 45% of Americans have a positive opinion of the Democratic Party, a slight dip from 48% in September.

Additionally, the poll finds 48% of Americans identifying as Republicans or leaning toward that party, compared with 44% Democratic identification or leaning.

Half the country now says he deserves reelection versus just 41 percent who said so before the 2018 midterms. It’s hard to disentangle all the reasons he’s trending upward — there’s the economy, of course, plus the economy, and also the economy, but there’s doubtless also an impeachment backlash component too. You know how he likes to tweet occasionally that he has 95 percent approval within the GOP and never actually cites any poll or data to back that up? Well, he can cite this one going forward: He’s at 94 percent among GOPers here, up six points from last month and likely a function of Republicans circling the wagons during his Senate trial. The bad news for Trump is that that partisan solidarity might fade a tiny bit once the trial ends and he’s out of danger. The good news, of course, is that it’s apt to come roaring back in November as the election intensifies partisanship on both sides.

And if that’s not enough, there actually is a little more bad news for Democrats swirling this morning:

I feel like turnout being rather low in Iowa is a theme of underrated importance.

The only actual information released by the Iowa Democratic Party last night was that, as far as they could tell, turnout was on par with 2016. That’s … not particularly high turnout. 2016 was the Clinton/Sanders caucus, the first in a primary which everyone assumed would be won by Hillary in the end. What Democrats wanted this year was 2008-level turnout, when the battle between Hillary, an upstart Barack Obama, and lefty favorite John Edwards blew the roof off on caucus night. One might have assumed that this year’s big field plus the enthusiasm of Bernie voters plus the urgency felt by Democratic moderates to hold back the progressive tide plus the party’s roiling enthusiasm to beat Trump might have added up to monster turnout.

But nope. Didn’t happen, it appears. If in fact Bernie or Pete Buttigieg won the caucus, which seems likely, and if a core part of their argument is that they can turn out young voters who normally don’t show up to elections, what should we make of their ability to defeat Trump given that Iowans were apparently no more enthused to caucus this year than they were four years ago?

It should be noted that the new Gallup data hasn’t quite been able to push Trump’s job approval to a new high in the RCP poll average. But in that case, it should also be noted that he reached his highest number in RCP in almost three years just a few days ago. The last time he touched 45.6 percent was early February 2017, during his post-inauguration honeymoon period. But he did it again on January 27 of this year.

It’s perfectly possible that tomorrow’s acquittal vote will send him to a new high in RCP’s average. And if it does, and if he ends up being reelected, rest assured that the recent fears of “retaliatory impeachments” for each new president going forward will be unfounded. Republicans might *want* to impeach a Democratic president the next time they hold a House majority but there’s no way they’ll pull the trigger after absorbing the lessons of the Clinton and Trump impeachments. If impeachment makes a president more popular, not less, then it’s a nonstarter politically. No matter how good it would feel to do it as a matter of pure partisan id.

Here’s CNN’s Harry Enten summing up the Democrats’ enthusiasm problem. WaPo columnist Karen Tumulty reports that Iowa Dems had been chattering that turnout last night might not only match the 240,000 who showed up to caucus in 2008 but could even zoom past it, to 300,000. If the preliminary estimates are right, they’ll end up with 170,000 or so. Hoo boy.