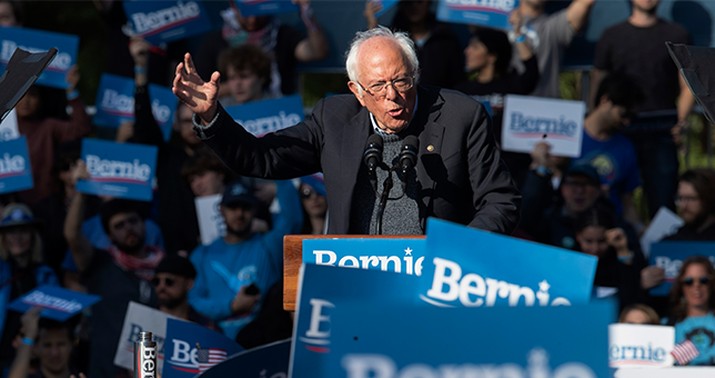 Democrats are really gonna do this, huh?

I’m imagining Barack Obama looking at these new polling numbers and contemplating his legacy: A wipeout of Democrats in federal and state races by 2016, the election of a Republican president whom O himself allegedly describes as a “fascist,” and the increasing likelihood that his own party will choose an out-and-out socialist as its next nominee. In time, the Obama/Romney contest of 2012 may come to be seen as the last non-“European” election America had for many years.

The well-respected NYT/Siena poll finds that everything’s coming up Bernie in Iowa:

Elizabeth Warren’s loss is Sanders’s gain, unsurprisingly, as the Times notes that she’s lost seven points since October while Bernie has gained six. Partly that’s due to young Democrats defecting from her camp to his. But another part may be perceived electability, ironically the core dispute between her and Bernie in their now famous 2018 conversation about whether a woman can beat Trump. Ask Biden and Sanders supporters if their guy has the best chance to beat POTUS this fall and 80 percent or so of each group says yes. Ask Warren supporters the same question about their candidate and the number drops to … 51 percent. It’s hard to see a Warren comeback in Iowa and New Hampshire if late deciders think she’s DOA against Trump. (Although, interestingly, she fares slightly less badly in Iowa matched up with the president, trailing 47/42, than Bernie does. He trails 48/42.)

Bernie’s seven-point lead in the NYT poll is the biggest of any candidate in Iowa since mid-November, when the Buttigieg boomlet was in full swing. Sanders is now the frontrunner there according to the two most highly regarded polls of the state; the Des Moines Register also found him leading at the beginning of the month, albeit narrowly. Even so, Iowa remains a jump ball, with Biden having led in two of the three most recent surveys. He still leads Bernie in the RCP average, in fact, but now by less than a point. Another new poll this morning from CBS, in fact, Sanders ahead by exactly one point:

It could go either way next Monday, although CBS makes a smart point in its story about how the 15-percent threshold for delegates could end up benefiting Bernie. There are actually two ballots on caucus night, with the initial vote designed to see how many candidates have at least 15 percent support. Supporters of any candidate who falls short of that number on the first vote can then switch to a different candidate on the second ballot. Joe Biden stands to benefit from that rule potentially, as one would assume most of Amy Klobuchar’s more moderate backers will switch to him on the second vote. But Sanders could benefit enormously if Warren come up just shy of the threshold at 14 percent or so, freeing her progressive fans to stampede over to Bernie. He might win going away.

For the moment, though, it’s close in Iowa. Is the same true in New Hampshire? New from CNN:

As in polling elsewhere, shifting preferences among liberals have changed the dynamic of the race: Sanders has gained 13 points among liberal likely primary voters in New Hampshire while Warren has dropped 7 points. Sanders now holds a clear lead within that group: 39% back him, 21% Warren.

Again we find Bernie ahead and again it’s because Warren is bleeding liberal support to him. (To add insult to injury, he’s increased his share of women voters there by eight points since October, yet another sign that Team Warren’s “sexism” attack on him has failed, if not backfired.) A nine-point lead is a sizable margin by the standards of this primary and this isn’t the only poll lately showing Bernie pulling away: Remember that a different poll of New Hampshire a few days ago found him ahead by 12(!). He’s led in the last five surveys of the state and his lead in the RCP poll of polls of New Hampshire now exceeds five points, the biggest advantage any candidate has enjoyed since mid-August. Given how easily he beat Hillary there in 2016, there’s every reason to think NH Democrats are coming home to him as they make up their minds.

If he wins Iowa comfortably and then takes New Hampshire going away, what does the Democratic establishment do? Barack Obama doesn’t want to weigh in on the primary, it seems, but can Biden talk Michelle Obama into an endorsement?

There’s a second poll of New Hampshire out this morning, this time from NBC. Guess who’s leading:

Not a rout, but if Pete Buttigieg is the last obstacle in the path of a Bernie Sanders nomination then the establishment’s in bigger trouble than I thought. In fact, Buttigieg is something of an asset to Bernie right now. Both the NBC poll of New Hampshire and the CBS poll of Iowa find him cutting into Biden’s advantage with older Democrats while Sanders runs away with the youth vote. Biden needs Mayor Pete out of the race ASAP so that he can reclaim some of those voters before Super Tuesday.

The only good news for Biden in today’s poll-a-palooza is a national survey from ABC/WaPo that finds him still ahead nationally, with 28 percent. But even that comes with a bad omen: Sanders has risen to 24 percent, confirming that this is now a two-man race nationally as Warren remains stuck at around 14 percent or so. (Biden’s lead widens to 12 points among likely voters, but obviously the trends in national polling will shift depending on the results in the early states.) Warren has lost double-digit support among women since October and again is perceived as an especially weak match-up for Trump. When asked who has the best chance to defeat POTUS, 38 percent of Democrats in the ABC poll say Biden. Just 10 percent say Warren.

If Bernie has a weakness, it’s his own electability issues. In Iowa, the NYT poll found 56 percent of Dems agreeing that a democratic socialist would have a harder rather than easier time winning and the CBS poll found just one-third of Dems there willing to say that they think Bernie would defeat POTUS versus 45 percent who said so of Biden. In the CNN poll of New Hampshire, a mere 20 percent gave Sanders the best shot at beating Trump compared to 41 percent who said so of Biden. The results were basically the same in ABC’s national poll, with 18 percent claiming that Sanders would have the easiest time against Trump versus 38 percent who said so of Biden. This is Grandpa Joe’s great hope on election night next week — that a critical mass of Iowans will head down to caucus, have a hard conversation with themselves about whether the party is doomed with an avowed socialist as nominee, then switch to Biden at the last minute, however reluctantly.

One more data point for you, from the CBS Iowa poll. I wonder if … this might explain why Sanders hasn’t suffered in polling ever since Warren accused of him believing a woman couldn’t win:

In lieu of an exit question, here’s a clip you’ll see played 8,000 times in Republican attack ads over the next nine months if Democrats really do pull the trigger on Berniemania.

“You don't know how much your plan costs?"@BernieSanders: "You don't know. Nobody knows. This is impossible to predict."

“You're going to propose a plan to the American people and you're not going to tell them how much it costs?"pic.twitter.com/XZlrrt7ONL