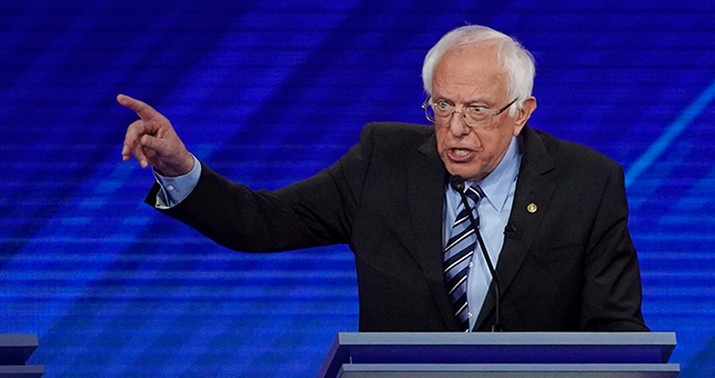 Another way to phrase my headline: The result in Iowa may determine whether Bernie is the Democratic nominee or not. If New Hampshire is in the bag then the caucus will largely decide what the race looks like on Super Tuesday. If Warren or Buttigieg wins Iowa then we may have a free-for-all, with the early states divided among multiple candidates. (Biden remains the favorite in South Carolina on the strength of his support with black voters.) If Biden wins Iowa and then follows it up with the expected win in SC then Sanders’s victory in New Hampshire might not matter much. It’ll be seen as a blip, Bernie winning on his “home field” while Biden wins elsewhere.

But if Sanders wins Iowa then he’s claimed the first two states. That may catapult him to victory in Nevada too. Suddenly it’s Biden’s “home field” win in South Carolina that would look like a blip. And maybe that win wouldn’t be so assured under the circumstances, since Bernie’s share of the black vote has been improving lately.

Are we going to have a socialist Democratic Party or something more mainstream? Tune in on February 3. Meanwhile, the new numbers from New Hampshire:

This has been a good period for Sanders, who’s been raising more money than anyone else in the race for the Democratic presidential nomination. Two national polls this week found Sanders and Biden ahead, while a number of polls have Sanders close to or in the lead in Iowa and New Hampshire.

The new WBUR poll (topline, crosstabs) is the latest. It finds Sanders is the choice of 29% of likely Democratic primary voters. That’s well ahead of Buttigieg, who led in the last WBUR poll in December but is now in second place with 17%. Biden (14%) and Warren (13%) are virtually tied in third place…

The 78-year-old Sanders does particularly well with younger voters. According to the WBUR poll, he has the support of 52% of Democratic voters under 30.

Twelve points is the biggest lead any candidate in New Hampshire has registered in any poll of the state since last summer. And it represents a huge bounce for Bernie. A month ago he and Warren were practically tied there, with Sanders at 15 percent and Warren at 12 percent. A month later he’s nearly doubled his share of the vote while she’s gained … a point. Sure looks like lefty late-deciders are making up their minds and have settled on Bernie, with WBUR noting in its story that the poll was taken just after the dispute between the two over sexism and whether a woman candidate could defeat Trump erupted in the media. In fact, Bernie has slightly more support among Democratic women in New Hampshire than men.

So how’s that leak of their 2018 private conversation working out for Warren? And before you answer, remember that this isn’t the only poll showing a break towards Bernie in the wake of that dust-up. To the contrary.

Benjy Sarlin flags this data point from CNN’s poll yesterday. Sanders is a radical but there’s no evidence right now that some Dem voters would balk at electing him if in fact he’s the nominee:

Getting pretty easy to imagine a Sanders win.

Evidence suggests rank-and-file see him as a relatively ordinary Democrat, despite segment of D donors, electeds, etc. who see him as a fringe outlier.

If he wins IA/NH, voters could decide to end race quickly and unite vs Trump pic.twitter.com/eUzzFzGMMc

The 12-point lead Bernie enjoys in today’s WBUR poll of NH is admittedly fluky compared to other recent surveys but it should be noted that it’s the third poll of the state in a row that he’s led. Harry Enten also notes that Sanders is holding his own in the third state on the calendar, Nevada, where he’s just a point back in the most recent survey. If he wins Iowa and New Hampshire, it’s perfectly plausible that the momentum would carry him to a trifecta in Nevada (a state with a large Latino population, proving that Sanders can win in places that aren’t monolithically white). If that happens, is there any chance of stopping him? Even if Obama and Hillary entered the fray by endorsing someone else?

David Byler considered the possibility and concluded … probably not:

[I]f the party’s most important figures were to endorse a Sanders opponent too late, they might not be able to stop him. Say Sanders racks up some wins in the early states and takes a real lead in the delegate count following Super Tuesday. Party leaders might not have the strength to push anyone else into a position to compete with him in the delegate race. And even if they did, they’d be opposing a candidate with small-d democratic legitimacy and risking party unity heading into the general election.

Sanders’s opponents have few other options available to them. Sanders doesn’t depend on top donors for money: He spent years building a network of small-dollar donors who have sustained him during long fights with mainstream Democrats like Clinton. Polls show that rank-and-file Democrats generally like Sanders and wouldn’t be disappointed if he were the nominee. And superdelegates, who don’t vote until the second ballot at the convention, might have trouble throwing the nomination to someone else if Sanders clearly had the most votes and delegates.

Even if the Democratic establishment suddenly united against him, Bernie would have cards to play. If he took the first three states and Warren finished third or fourth — especially a distant third or fourth — she’d come under immense pressure from the left to get out before Super Tuesday and unite progressives by endorsing Sanders. She’ll probably have at least 10 percent of the vote; adding that to Bernie’s total wouldn’t be inconsiderable. Meanwhile, assuming Biden is the last man standing who can stop Sanders, he’d face a dilemma in the form of Mike Bloomberg, who’s been spending mega-bucks in order to compete on Super Tuesday. Bloomy’s candidacy threatens to divide the anti-Bernie vote with Biden. Would Bloomberg possibly agree to end his campaign on a dime and put his resources behind Grandpa Joe on Super Tuesday instead in the name of stopping the socialist?

Or would he turn around and say to Biden and the Dem establishment, “I’m the only game in town now. Joe had his chance to stop Bernie in Iowa, New Hampshire, and Nevada. He couldn’t get it done. If you want a non-socialist nominee, it’s me or bust.” How would they respond?

For centrist Dems a Bernie trifecta in the three earliest states would force a hard reckoning: Do they really want to oust Trump at all costs? Because if they do, the obvious move at that point is to unite around Sanders. If instead they choose war by going all-in for Biden or Bloomberg or whoever, they’ll either fail and appear vanquished or they’ll succeed and face a party schism in November as angry progressives decide to boycott the nominee for “stealing” a nomination that was rightfully Bernie’s. What’s more important to the Obama/Clinton contingent, preventing a socialist takeover of the party or preventing a second Trump term?

I think maybe they’d resign themselves to Sanders being nominated and then quietly hope for a Trump victory, pointing the party back towards centrism in 2024. In theory.