ABC News’s chief political analyst: If Bernie’s not a sexist, why does he keep trying to deny women the Democratic nomination? 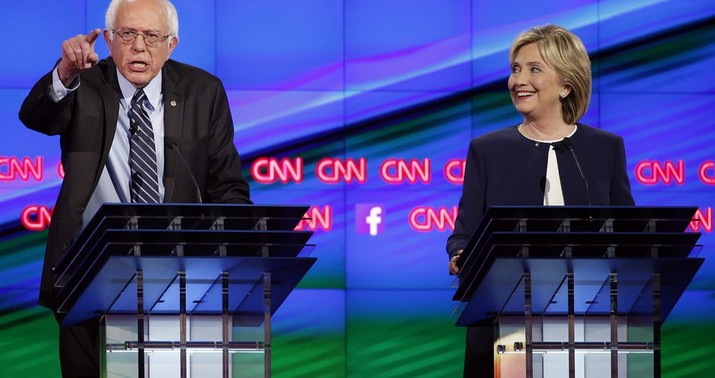 Via Andrew Stiles, a tantalizing taste of how stupid things could get tonight on social media if Bernie and Elizabeth Warren end up throwing down over sexism at the Democratic debate.

Well, probably not this stupid. Matthew Dowd’s hot takes about women politicians run hot even by the standards of Twitter.

As Stiles notes, Dowd’s logic leads us inescapably to the sad conclusion that Obama 2008 was one of the most sexist campaigns in American history.

You know one clear way to demonstrate that you believe a woman can and should be president? Don’t try to defeat a woman running for President.

What I find fascinating is that he keeps trying to defeat women running for president.

Maybe O gets a pass because he ran against a woman only once? Can’t fault a man for chasing his ambition by daring to compete with a female for the same job.

But if he does it twice, then you can fault the s*** out of him.

This tweet, using the Netflix film “Marriage Story” to summarize the Bernie/Warren dispute, made me laugh:

BuzzFeed is reporting this afternoon that Team Warren is backing away from this fight, with staffers nudging fans to de-escalate with Berniebros ahead of the debate. Thus are our worst/most sexist suspicions confirmed: Women aren’t tough enough to be president.

The next morning, hours before Warren and Sanders were expected to address the conflict in Des Moines at Tuesday’s Democratic debate, the campaign official followed up to caution supporters against accusing Sanders of sexism, saying that the line of questioning would be “really bad news for us.”

“I would be careful with the ‘sexism’ angle when it comes to the Bernie/Warren exchange individually — that’s not what this is about and I think it’ll be really bad news for us if that becomes what this is about (i.e. press asking her if she thinks Bernie is sexist),” the staffer told the group. “Is that what this is about broadly? Absolutely. But no one here is actually claiming Bernie himself is sexist (regardless of your own personal beliefs on that topic).”…

At one point in a lengthy DM to the Twitter group on Tuesday morning, the Warren staffer’s description of the controversy hewed closer to Sanders’s description than Warren’s. “Claiming you’re worried a woman can’t win/flagging that she’ll receive sexist attacks is something many, many people feel,” the campaign official wrote.

The confounding thing about yesterday’s leak is that it was obviously orchestrated by Warren and her campaign but also obviously carried more potential downside than upside for her. For the “Bernie’s a sexist” attack to work, progressive voters first need to be convinced that Sanders, a lifelong socialist, actually said it to her. Then they need to be convinced that he meant something more nefarious than “Trump’s going to weaponize sexism, reducing a woman candidate’s chances of winning,” an opinion which many of them no doubt find defensible. And then they need to be convinced that Bernie’s sexist sin here justifies supporting Warren over him even though they might prefer him on balance on the issues. All of that needs to happen to help her pick up votes. Meanwhile, the only thing that needs to happen to cost her votes — either right now in the primary or via Bernie fans boycotting the general if she’s the nominee — is progressives concluding that this was a dirty hit at the last minute borne of desperation as she’s declined in the polls. She’d impugn a good man and hero to the cause for no grander reason than that he’s standing in her way.

That entire calculus was clear to her and her advisors, I’m sure, but they followed through on the leak anyway. And now she either has to double down on it at the debate and compound the potential offense to Bernie voters or back way off and look cowardly to everyone. It’s a strategic master stroke.

Also, looks like Bernie Sanders is out with a new advertisement this AM focusing on his women's rights record (h/t @Ad_Analytics) pic.twitter.com/6sTwr6Zl6M

No, There Is No Gun Show Loophole Per DOJ Study

“The surest way to flip those seats back to red is for Sanders to be at the top of the ticket.”