Did Warren plant the sexism attack on Bernie because she’s planning to use it at tomorrow night’s debate? 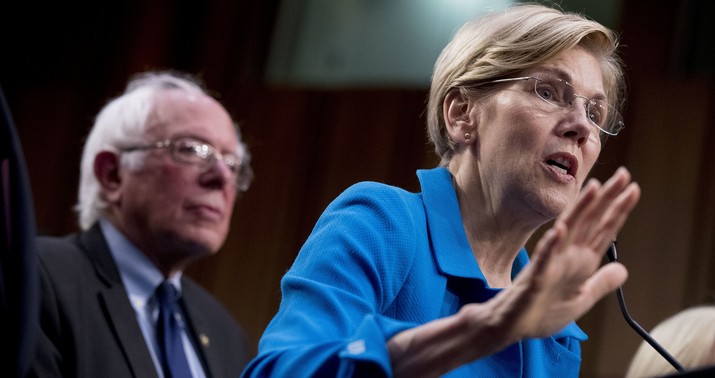 Ten minutes before I read this post: “Nothing could make me watch the debate tomorrow night.”

Ten minutes later: “I should knock off work early tomorrow to make sure I can watch the debate.”

It is … convenient that a news story that’s potentially helpful to Elizabeth Warren in drawing progressive voters away from Bernie Sanders should happen to appear on the eve of a debate, guaranteeing that the moderators will have to raise the subject rather than Warren herself having to raise it out of the blue. And as Ed noted in his post, it is … interesting that Bernie’s very dear friend Elizabeth would politely decline comment today when asked if the story is true instead of saying, “Of course not, it’s preposterous.”

One of Hillary’s former press guys has a theory.

given that the story was placed by the Warren camp – with CNN, on the eve of a CNN debate – & her team declined to comment…

have to assume Warren is teeing it up to make this assertion herself on the debate stage, which would be fascinating.

would Bernie just call her a liar? https://t.co/yjRPvPPOfv

Is that what’s going on here? Did Warren feed the story to CNN because she planned all along to go nuclear attack on Bernie over sexism at the debate and needed a pretext for it? She’s the only woman in the top tier, and she’ll be one of only two women onstage tomorrow night at an event that’ll consist exclusively of white candidates. Democrats are especially sensitive at the moment to the criticism that they seem headed towards nominating a white guy yet again.

And now, very conveniently, Warren’s all teed up for a big moment on identity politics. Hmmmm.

But there’s a problem: I think this line of attack against Bernie does her more harm than good. For one thing, it’s hard to believe he said what he’s accused of saying. As Sanders himself reminded everyone today, Hillary won millions more votes nationally than Trump did in 2016 and probably would have squeaked through in the swing states if not for her phenomenal unpopularity. It’d be ludicrous in context to insist that a woman can’t win and Bernie would know it. It may be that he told Warren it would be harder for a female nominee to win than for a male, but that’s not an outlandish claim. Ramesh Ponnuru explained why succinctly:

It is odd that it's acceptable to invoke sexism as an explanation for a loss but not to draw straightforward strategic conclusions from it. https://t.co/sU0zRZN9EN

Remember when Michael Avenatti (remember Michael Avenatti, period?) told Time magazine in October 2018 that the Democratic nominee had “better be a white male” because, although it’s unfair, “when you have a white male making the arguments, they carry more weight”? He took heat for that but plenty of rank-and-file Democrats share the same suspicion. CNN did a segment last spring on why three white men were leading the Democratic field at the time and reporter Nia-Malika Henderson shared that various primary voters had confessed to her that they thought only a white guy could compete with Trump for the working-class white voters who tipped the election to him in 2016. WaPo columnist Jonathan Capehart wrote last summer about visiting with his African-American family in North Carolina and finding solid support for Biden. When he asked why, this was one of the reasons he got:

One aunt said something my mother said to me nearly a year ago. That it’s going to take a white man to straighten out the mess we’re in. “The way the system is set up now, there is so much racism that it’s going to have to be an old white person to go after an old white person,” my aunt told me. “Old-school against old-school.” She talked further about what this meant for younger candidates such as Buttigieg. “The whole world is in a crazy state, and somebody’s gotta put it back in order. And I think a lot of the young people who want to put it back in order, want to change it completely,” she continued. “But first, you’ve got to put it back in order before you can start changing it.”

It’s anathema for progressives to suggest that the party should be strategic in who it nominates based on sex or race but the average voter is thinking about it and has been from the beginning. It may be no coincidence that the last big debate before Iowa will include no minority candidates. How many average Democrats will read today’s story about Warren and Sanders and think, “Even if Bernie did say that, it’s not crazy”?

More than anything, though, it’s hard to believe Warren teed up this attack for the simple reason that it’ll likely cost her more votes than it’ll gain her. I wrote in this morning’s post that one thing she needs to worry about if she’s the nominee is convincing Berniebros that she’s worth turning out for next fall even though it’ll mean she’ll have vanquished their hero. With Bernie out on the trail encouraging them to put hard feelings aside, I thought, she can convince them. But now, suddenly, the race has turned ugly; Sanders’s character, not to mention his commitment to feminism, has been challenged. And Warren is suddenly in a position on the eve of a debate in which she’ll be forced to take a stand on that subject in front of millions of viewers. No matter how she answers, it’s apt to piss off Bernie fans. If she confirms the story, obviously it’s war. If she refuses to comment on grounds that it was a “private conversation” or whatever, she’ll get shredded for trying to have it both ways, letting her staff impugn Sanders while cowardly refusing to set the record straight.

And if she defends Bernie and denies that he said any such thing, her campaign looks sleazy and she looks sleazy by association. Plenty of Berniebros will scoff at her denial, accusing her of having smeared their guy by planting the story only to play the part of the “good friend” while people are watching to keep her fingerprints off of it. No matter how you slice it, the Sanders contingent comes away embittered at her. How many Bernie voters will be so troubled by the story, and so convinced that it’s true, that they’ll defect from his camp to hers now? And meanwhile, how many Bernie voters who choose to stick with him will resolve that they’ll never vote for Warren after such a cheap shot so late in the pre-primary stage of the race, no matter how much he stumps for her next year?

Really hard to see how Warren benefits from it. But it’s also hard to believe that her staff would leak it without her approval, knowing what an awkward position it places her in. It feels to me like a reprisal for the news over the weekend that Bernie’s volunteers have been questioning her electability while canvassing for him. This may be Team Warren’s attempt at deterring further negativity, showing him that they’re willing to hit hard if he cheats on their nonaggression pact. But the timing is strange. Why didn’t they wait to leak it until after the debate, so there’d be no chance to put her on the spot about it on national TV?

NEWS: A senior Bernie Sanders' adviser tells me they believe that Elizabeth Warren's campaign intentionally leaked a false description of their 2018 meeting. Says it's a recent pattern of Warren attacking the Dem front-runner.