Trump to Iranian protesters: We are with you 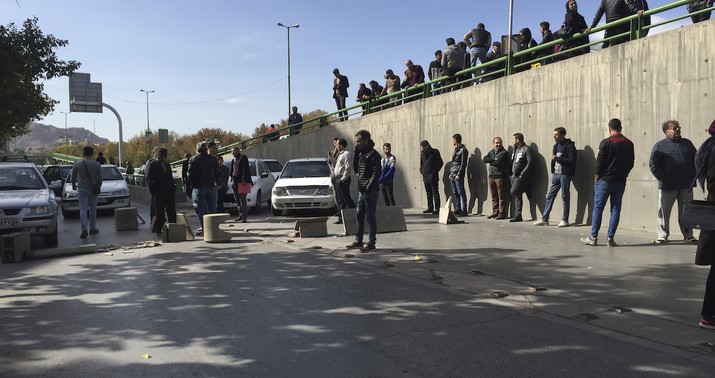 Good tweets, good message. And to his credit, not the first time he’s taken care to distinguish the Iranian government from the people of Iran. That’s what made his grumbling last week about bombing Iranian cultural sites so foolish. It’s the sort of blow that would be felt by the entire population, not just the mullahs and IRGC.

To the brave, long-suffering people of Iran: I've stood with you since the beginning of my Presidency, and my Administration will continue to stand with you. We are following your protests closely, and are inspired by your courage.

The government of Iran must allow human rights groups to monitor and report facts from the ground on the ongoing protests by the Iranian people. There can not be another massacre of peaceful protesters, nor an internet shutdown. The world is watching.

To the leaders of Iran – DO NOT KILL YOUR PROTESTERS. Thousands have already been killed or imprisoned by you, and the World is watching. More importantly, the USA is watching. Turn your internet back on and let reporters roam free! Stop the killing of your great Iranian people!

Social media is overflowing this morning with reports of protests in Iran yesterday following the regime’s admission that it was an Iranian missile that destroyed that Ukrainian jet last Tuesday. Thousands of students gathered last night in Tehran for what began as a vigil and ended with them shouting their rage at velayat-e faqih.

They shouted for the Revolutionary Guards to “let go of the country” and, “Death to the dictator!” referring to Supreme Leader Ayatollah Ali Khamenei…

“Soleimani was a murderer, his leader is, too!” was one chant heard Saturday. Posters of the general that had been hung for his funeral were torn down, videos posted online showed…

Some of the students held up a banner that read, “F- -k you & your mistake!” and had the names and photos of the 16 Iranian students who died in the disaster.

They chanted, “Bisharaf!” a Farsi word for “dishonorable” that is considered one of the worst insults in the culture, and demanded officials involved in the missile attack be removed from their positions and tried.

The Times has video of the “bisharaf” chanting. The State Department is making sure that everyone knows the state of play too:

The Iranian people continue their protests against the lies, incompetence, and cruelty of the ayatollah’s regime. #IranProtests pic.twitter.com/iF6aJFc0T3

I’m wary of optimism about the protests given how resilient the regime’s been in putting out populist fires over the last decade or so. They quashed the Green Revolution in 2009 and proved last year that they’re willing to spill oceans of blood to keep the peace after mass demonstrations broke out over rising gas prices. But it isn’t just excitable anti-regime activists today who think the outrage over the jet shootdown is a big deal internally. Media observers think so too. “Criticism directed at Iran’s leadership came from all factions inside the country,” claims the Times, with even hardliners groaning about the military’s lies and incompetence. “The criticism of Iran over the crash threatens to eclipse whatever international sympathy Iran has garnered in its escalating confrontation with the Trump administration,” it added. One of the leaders of the Green Revolution proclaimed afterward that Khamenei had lost his moral authority to rule. A 10-day span that began with the U.S. taking out the country’s top general and Iran exacting no American casualties in response is going to end with a devastating legitimacy crisis for … Iran, thanks to its recklessness in taking down the jet.

Jason Rezaian, the WaPo reporter who was taken prisoner by the regime for 18 months several years ago, writes today that the jet shootdown is a “make-or-break moment” for it.

How Iranian security forces respond to new protests will be a key factor in determining the future of the regime. If they attempt to suppress this public anger over an act of senseless aggression that killed 176 innocent people, they will exacerbate their already massive credibility problem.

A more conciliatory action could lead to a short-term cooling of tensions, but it would also be an expression of weakness, something a regime that claims to draw its leadership from the divine is loath to do. There have been precious few instances in the Islamic republic’s 40-year history when authorities have admitted mistakes.

It is surprising that they admitted the mistake instead of following the Russian playbook of flatly denying culpability no matter how clear the evidence is to the contrary. Presumably the video of the shootdown forced their hand — although even then, you’d expect them to fart out a conspiracy theory involving the CIA and Mossad taking down the jet to frame the Islamic Republic or whatever.

Regardless, Rezaian’s point that Iranian blood is cheap to the regime is well taken, especially so soon after the bloody crackdown on the gas protests. I can’t remember where at the moment but I read someone yesterday speculate that Iran kept passenger jets flying on Tuesday night instead of closing the airport ahead of its missile attack because it feared a U.S. counterattack and hoped having those jets aloft in Iranian airspace might deter one. That is, Iran was using the passengers as human shields. They ended up dead anyway by Iran’s hand, not ours

The irony amid the uproar is that Iranians have been more clear-eyed about blaming their own government for the shootdown than American liberals have been. Take 30 seconds to click here and read through the thoughts of journalist Yashar Ali, who has family in Iran and reports today that the country is a “tinderbox” because of outrage over the jet’s fate and the regime’s lies about it afterward. This would be a fine moment for lefties here at home to rally behind the protesters, Ali notes. So why aren’t they doing it?

If Iranian demonstrators believe the blood is on the regime’s hands instead of Trump’s, of what use are they to Trump’s domestic opposition here? Worse yet for Democrats, if the jet shootdown ends up destabilizing the regime then the most dire predictions of critics of the Soleimani strike will have been upended. Instead of an Iran unified in rage at the United States and eager for multi-theater conflict, we might end up with Iran bitterly divided and the regime badly weakened by internal opposition. The protests, quite simply, are bad for the narrative that Trump farked up egregiously here, even if they end up reducing the chances of war with Iran.

In lieu of an exit question, gonna leave you with a few tweets.

Bravest people in the world. pic.twitter.com/xjCav4reQi

“They lie and say the enemy is America, our enemy is right here in #Iran.”
Anti regime protests in Esfahan, #Iran. pic.twitter.com/oae0Ji8fDu

Iran: protestors refuse to walk on US & Israeli flags pic.twitter.com/xTu3gXpfxJ

Stunning: Dan Bongino Reveals FBI 302 from May 2017; FBI Team Tells Rod Rosenstein the President Is NOT a Suspect