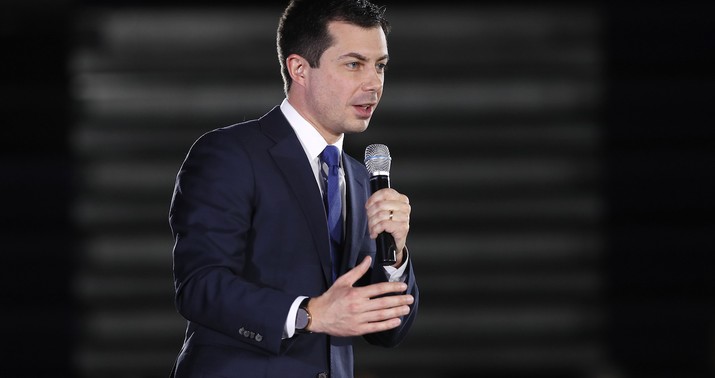 And not just New Hampshire. The last poll taken in Iowa showed him tied with Bernie Sanders for the lead there too.

There’s a realistic chance that Alfred E. Neuman wins not one but both of the early states. What happens then?

And what’s the Republican rooting interest here vis-a-vis Bernie and Warren? Biden looks to be the toughest match-up for Trump next fall so the GOP doesn’t want to see him as nominee. But would they rather face an elderly socialist populist with ardent grassroots support or an under-40 neoliberal whiz kid looking to become the first openly gay president? Who’s easier to beat?

The real news here, actually, is the performance of the top four, not just Boot Edge Edge.

An excellent trend for Mayor Pete, a bad trend for Biden, and a reeeeally bad trend for Warren. And yet even Warren is still hanging on at 15 percent. That’s important because 15 percent is the threshold a candidate has to meet in each primary in order to be awarded delegates from that state. Since that rule was instituted in 1992, Democrats have never had a primary where four different candidates reached 15 percent. If you believe Monmouth, they’re on the cusp of doing it next month in NH. And if you believe the latest poll out of Iowa, they’re on the cusp of doing it there too.

If the big four are splitting delegates almost equally among themselves after the first month of the race, what incentive do any of them have not to press on and keep the field frozen among them?

And if you’re thinking that having all of the also-rans drop out after Iowa might clarify the picture in New Hampshire by re-sorting their voters among the top four, think again. Monmouth tested that possibility by asking a follow-up question in which people were forced to choose exclusively among Biden, Sanders, Buttigieg, and Warren. Result: Biden led with 24 percent, Warren finished last with 18. Again, everyone hit 15 percent. No one pulls even a quarter of the total electorate. Yeesh.

A question, then: If the race is a mess after the first two states, does Obama get sucked in and endorse someone? The Daily Beast reported a few days ago that ObamaWorld is nervous about Berniemania and worried that they won’t be able to stop him if he wins early and builds momentum.

“If you read between the lines of what the Sanders folks are saying about the rationale of his candidacy, it is based on their belief that Barack Obama was not progressive,” one former senior Obama campaign staffer told The Daily Beast. “There is a fundamental flaw in the Sanders candidacy relative to the Obama coalition and it’s because they’ve continually undermined President Obama.”

Privately, Obama has reportedly acknowledged problems with Sanders’ vision for the country. In November, Politico reported that the former president once said that if it looked like the senator were close to winning the nomination, he would speak up in some capacity to help stop that from happening. A spokesperson later muddied the waters when asked about the comment by the outlet, saying that Obama would support the nominee. Still, Obama’s rare public statements give a glimpse into his thinking about Sanders 2020.

Imagine Buttigieg pulls the upset in Iowa and then Sanders takes New Hampshire and Nevada. South Carolina would be even more important potentially than it looks to be right now. Does Obama continue to sit it out at that point, knowing that a Bernie win there might finish the race? Does he back Buttigieg as the last best hope of neoliberalism in holding off the socialists, knowing that he’d be knifing his buddy Joe Biden by doing so? Or does he endorse Biden, knowing that he risks splitting the centrist vote nationally between Biden and Buttigieg by doing so and enabling a Sanders nomination?

In lieu of an exit question, go play around with Nate Silver’s new election model, which has Biden winning Iowa(!) and the nomination and Bernie squeaking out a win in his backyard of New Hampshire. But the model is full of uncertainty: Biden and Sanders each have only about a one-third chance of winning Iowa and New Hampshire, respectively, and each of the top four looks on track to meet the 15 percent threshold in both states.