Pelosi: The House will vote to limit Trump’s power to wage war against Iran to 30 days 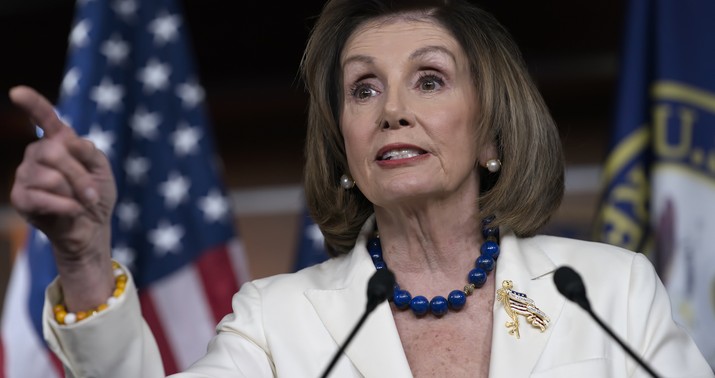 Pitiful. Not the impulse behind the idea — that’s virtuous, wanting to reassert Congress’s warmaking authority by imposing limits on the president’s power to strike unilaterally. Clearly America shouldn’t be dragged into conflict, especially major conflict, by a single elected official if the people’s representatives oppose it. What’s pitiful is that each party’s interest in reasserting that authority waxes and wanes depending upon which party the president belongs to. One would hope that a subject as momentous as which branch has the final say over war might escape the immense gravitational pull of partisanship, but nope. The War Powers Resolution orbits Team Blue/Team Red inanity just like every other topic in Washington does.

“Last week, the Trump administration conducted a provocative and disproportionate military airstrike targeting high-level Iranian military officials,” Pelosi said in a letter to colleagues Sunday. “This action endangered our servicemembers, diplomats and others by risking a serious escalation of tensions with Iran.”

“As members of Congress, our first responsibility is to keep the American people safe,” she continued. “For this reason, we are concerned that the administration took this action without the consultation of Congress and without respect for Congress’s war powers granted to it by the Constitution.”…

“It reasserts Congress’s long-established oversight responsibilities by mandating that if no further Congressional action is taken, the Administration’s military hostilities with regard to Iran cease within 30 days,” she said.

The War Powers Resolution was passed in 1973 over Richard Nixon’s veto and seeks to limit the circumstances in which the president can go to war on his own. Specifically, it says, only if Congress has formally authorized some sort of military action *or* if there’s a national emergency caused by an attack on the United States is the commander-in-chief empowered to act. That’s not what we had with the Soleimani killing, although some hawks would argue that the 2002 AUMF greenlighting the Iraq war and the subsequent 2014 deployment of U.S. troops to Iraq to fight ISIS kinda sorta provide the necessary authorization. The Resolution also says that “The President in every possible instance shall consult with Congress before introducing United States Armed Forces into hostilities or into situation where imminent involvement in hostilities is clearly indicated by the circumstances.” We didn’t have that either in the Soleimani case. In fact, the latest word from WaPo is that Mike Pompeo started chatting with Trump about targeting Soleimani months ago. That doesn’t mean that last week’s strike wasn’t in response to an imminent threat — maybe Soleimani was on the cusp of ordering something big — but it raises the question of why the administration didn’t seek broad authority sooner to target Iran’s military under certain circumstances.

So, no, it’s not off-base for Pelosi to demand a congressional role in decisionmaking at a moment when the U.S. is at risk of war with the region’s foremost Islamic military power. What makes it pitiful is how short her memory is. Come with me on a trip back in time to June 2011. Headline: “Pelosi backs Obama on Libya.”

President Obama did not require Congress’s approval to launch attacks in Libya, nor does he need congressional authorization to keep U.S. forces there, the top House Democrat said Thursday.

Minority Leader Nancy Pelosi (D-Calif.) said the White House violated neither the Constitution nor the War Powers Resolution when it launched military operations in the war-torn African nation in March without Congress’s endorsement.

“The limited nature of this engagement allows the president to go forward,” Pelosi told reporters at the Capitol. “I’m satisfied that the president has the authority he needs to go ahead.

You will be shocked to learn that at the time it was Republicans, the out-party, who were demanding greater executive consultation with Congress before the White House attacked Qaddafi in Libya. Pelosi would defend her hypocrisy by insisting that the two situations, then and now, are materially different. There are American troops on the ground in Iraq who are directly in harm’s way if Iran retaliates whereas there were none in Libya. The Libya intervention was aimed at preventing a humanitarian disaster by Qaddafi, the mass slaughter of Libyan rebels, whereas Soleimani wasn’t threatening anyone on quite that level. (The hundreds of thousands killed in Syria as part of Iran’s proxy war are already dead.) And Qaddafi’s regime was a pipsqueak power capable of menacing its own people and virtually no one else, very much unlike Iran. The potential repercussions from killing Soleimani are an order of magnitude greater for U.S. national security.

But none of that has anything to do with the basic point of the War Powers Resolution, which is to demand coordination with Congress on military action whenever feasible. Coordination was eminently feasible before the first bombs fell in Libya. There were UN debates about intervention; a multinational coalition was formed; a lot of planning went into it. It wasn’t a matter of acting immediately on perishable intelligence about a single official’s whereabouts, as was the case with Soleimani. Siding with the rebels against Qaddafi was also far more aggressive an act in furtherance of regime change than taking out Soleimani was vis-a-vis Iran. If the United States is going to take military action that leads to the fall of a government somewhere, you would think that’d be a paradigm case for involving Congress. Most damning of all, though, is the fact that Obama’s own lawyers at the Pentagon and DOJ thought he was bound by the War Powers Resolution. O decided to ignore them for reasons of convenience and side with members of his own staff who concluded that bombing a foreign regime knowing that it would likely lead to the downfall of that regime somehow doesn’t amount to “hostilities” for purposes of the Resolution.

Pelosi could have struck a blow for her branch of government by making a big deal of that revelation at the time and insisting that the president come to Congress for authorization of further action in Libya. Instead she went into the tank like a good partisan hack. She’s doing the same thing now with Trump, pandering to a lefty base that would have been quiescent if Obama had liquidated Soleimani in one of his own many, many drone strikes. And of course Republicans in the House and Senate won’t dare complicate Trump’s life by joining her in this futile exercise to demand executive accountability. They’ll vote against the resolution like good party hacks too, ensuring that it fails to attract the two-thirds majorities in both chambers that it would need to overcome a Trump veto.

In lieu of an exit question, go read this Timothy Carney piece about another embarrassing hypocrite in Pelosi’s caucus on this subject.

CDC to Cornell Professor: Those Aren't Our Guidelines, You Know.

Come ON! Sen. Chris Murphy already has the next article of impeachment all ready to go for House Dems

ESPN analyst: Get real. There’s not going to be any football this year.

“Next thing you know you got a locker room full of guys that are sick.”