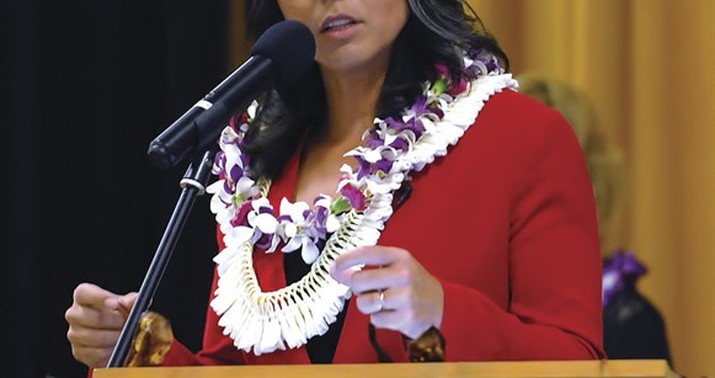 They’re not from any ol’ Trump states either. Tom O’Halleran hails from Arizona while Conor Lamb represents a district outside Pittsburgh, which is supposed to be Trump country but which has elected Lamb twice. Those are top-tier swing states in 2020. The president will be stopping by each early and often on the trail next year, and will doubtless seize the opportunity to remind his fans that O’Halleran and Lamb each supported tossing him out on his ear. Now it’s time to return the favor.

Neither man comes from a district that leans overwhelmingly Republican so this was an easier call for them than it’ll be for, say, Kendra Horn of Oklahoma or Joe Cunningham of South Carolina. But it still amounts to a heavy wager that impeachment won’t be much of an albatross in swing districts.

“The evidence is strong, and it warrants impeachment,” Lamb said in an interview from his Washington office. “The facts show the president abused his office and compromised our national security. I can’t think of anything more serious than that.”…

“What this investigation has shown is that the reason he did that was not in our national security interest of opposing the Russians and opposing [Russia President Vladimir] Putin but in President Trump’s own political interest to oppose Vice President Biden. And that’s an abuse of office,” Lamb said…

Van Osdol asked Lamb about the Republican argument that Trump eventually did approve aide to Ukraine.

“It doesn’t excuse the months of delay in which President Trump not only withheld that aid but actually made demands of the Ukrainian leadership that were not consistent with our national security interests,” Lamb said.

I think Lamb might view this vote the same way Sharice Davids of Kansas, who’s also backing impeachment, is viewing it. Like her, he’s very young (just 35), and as a Democrat who’s proved he can win in a red area — in the midwest, in his case — he’s got leadership potential within the party. He recognizes this is a litmus-test vote for the Democratic base and that he needs to pass it or else that leadership path will be blocked. So he’s going to pass the test now and worry about his general election later.

O’Halleran’s different. At 73, he’s more than twice Lamb’s age and isn’t eyeing a state or national future. But he’s in a jam on this vote: He’s facing two primary challengers, who were driven to oppose him by the fact that he votes with Trump 54 percent of the time. (Trump won his district in 2016.) He’s already on thin ice with the left, in other words, and will fall through if he fails them on the big vote. I think he figures that between his somewhat Trumpy voting record and the fact that he won his last election fairly comfortably, with 54 percent, he has enough goodwill banked with right-leaning swing voters that the safe play is to protect his left flank and then try to squeeze through to reelection next fall.

I don’t think Pelosi will lose any votes from Democrats who come from red-leaning districts like Lamb and O’Halleran. Only those few from blood-red districts like Horn and Cunningham can get the sort of pass that Joe Manchin routinely gets from the left, in which everyone understands that Democrats have zero chance of holding the seat if anyone but the incumbent is nominated instead. If the choice is between a Democrat who’ll vote with Republicans most of the time and a Republican who’ll vote with Republicans all of the time, progressives will satisfy themselves with the former.

Speaking of progressives, there’s a well-known lefty from a verrrrrrry blue district who’s curiously still undecided at this point. You may have heard of her:

“I have had concerns for a long time about impeachment being pursued for partisan reasons,” [Tulsi] Gabbard said, noting that she did vote to authorize the impeachment inquiry. “Pursuing impeachment for partisan seasons is something that will only further divide an already divided country and it actually undermines our democracy.”

She added: “I am undecided on how I am going to vote.”

This is exactly what many at Gabbard’s events want to hear, especially the number of independents and Republicans who are currently weighing whether to back a Democrat or cast their second vote for Trump.

You may remember that Gabbard was vocally skeptical of launching an impeachment inquiry into Trump then changed her tune shortly before the October presidential debate, knowing she’d be torn to shreds for not joining in on her party’s new crusade. She was facing a credible primary challenge at the time and growing complaints from lefties that she’s way too comfortable with Fox News and its audience. Not long after that, she announced she wouldn’t run for reelection. Which means she’s at a crossroads politically, sort of free to vote her conscience on impeachment but — at the tender age of 38 — also sort of not. If she plans on remaining in politics *and* on remaining a Democrat, she has to pass this litmus test by voting to impeach. In a state as blue as Hawaii, she’d be wrecked in a future run for governor or senator if she had to compete in a primary as the so-called progressive who opposed removing Trump.

If, on the other hand, she’s planning to go independent or even Republican(!) and reorient herself as a right-wing nationalist with a few left-wing quirks on policy, then she needs to pass that faction’s litmus test by voting against impeachment. Gonna be hard to sell Trump fans on Tulsi!, airing Sunday nights at 9 p.m. ET on Fox News next year probably, if she’s on record as in favor of impeachment.

I think she’ll vote no. After all, if she supports Trump on this, she might be in line for some sort of administration position in his second term as even more aides depart. Maybe he’ll make her National Security Advisor. It’d be cool to have two Assad apologists in that role (informally) instead of one.