Dem who voted against inquiry confirms: I’m voting against impeachment 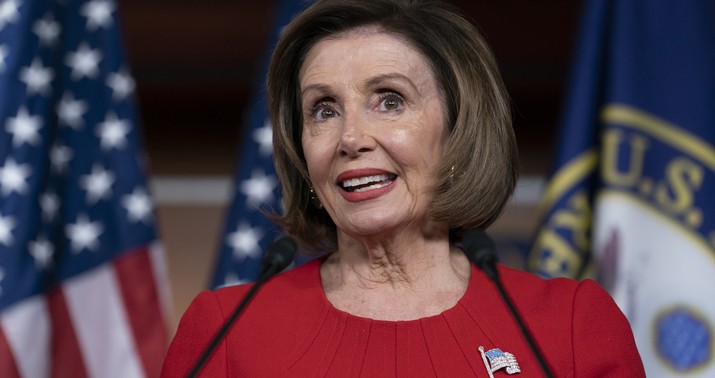 Not a surprise, particularly after he warned his party last week that he hadn’t seen anything new at the public hearings to soften his initial opposition to this process. “Be careful what you wish for,” Jeff Van Drew said to his colleagues last Thursday.

But while not surprising, it’s still significant: Van Drew is, I believe the first House Democrat to commit to voting no on the final articles of impeachment. He’s gift-wrapping a talking point for the GOP here that Pelosi and Schiff failed to persuade even the (few) skeptics in their own party with the pageant they put on over the past month.

The “primary his ass” tweets from lefties have already begun percolating on Twitter in response to the news.

He’s in his first year as a congressman, representing a district in New Jersey that leans very slightly Republican. He must feel strongly about his ability to survive a primary, as the safe play politically would have been to do the “sad and prayerful” shtick before pandering to his base by voting to impeach. The Philadelphia Inquirer publishes across the border from Van Drew’s district but is read there, and singled him out by name in an editorial this afternoon calling on the House to follow through and nuke Trump:

In defying these orders, and through his continued ridicule of the impeachment process and the members of Congress who initiated it, Trump has severely disrespected his office and the document he swore to protect and uphold. Should this process end with a trial and a Senate vote to remove him from office — a prospect that seems highly unlikely — it’s not hard to imagine that he would insist that the process was invalid and refuse to go.

Such an act of tyranny is what the Constitution was created to protect against. That is why this impeachment process is urgent and should move forward without delay…

The articles are expected to go to a full House vote next week. All eyes should be on two local lawmakers, Jeff Van Drew, a Democrat from New Jersey who voted against an impeachment inquiry, and Brian Fitzpatrick, a Republican who has shown a propensity for challenging the party line. Both need to step up on the impeachment vote – if not to punish abuse of power, then to affirm Congress’ standing as a coequal branch of government.

The Inquirer’s going to go 0 for 2. And given the state of the polling right now, I wouldn’t bet against either Van Drew or Fitzpatrick returning to Congress in 2021 — unless lefties really are serious about taking the Democrat out. Stay tuned.

Dems did get a little good news on impeachment, though. Sharice Davids, another freshman facing a tough reelection, announced last night that she’s all-in on impeachment. Davids hails from a redder district and a much redder state (Kansas) than Van Drew but she’s willing to roll the dice on alienating Republican voters:

The evidence uncovered by the House impeachment inquiry is overwhelming. And the facts are uncontested.

President Trump used the office of the Presidency to solicit foreign interference in our elections for his own personal, political benefit. He pressured Ukraine’s President to investigate his political rival, while withholding millions in taxpayer-funded aide to Ukraine. And since this information came to light, President Trump has defied congressional subpoenas, withholding critical documents and testimony.

After careful deliberation, I plan to vote for the articles of impeachment that have been brought forward against the President.

Why was Davids willing to pull the trigger when Van Drew wasn’t? I’m … not sure. They each won their elections last year by similar margins, Davids by nine points and Van Drew by almost eight. Davids isn’t a radical lefty either, as far as I know. She’s a member of the New Democrat Coalition, a caucus composed of Dems who lean more centrist on economics. Maybe her position on impeachment is a matter of conviction. Or maybe she sees an opportunity to make a splash within the House with this vote, which would be a shrewd if risky play on her part. Davids is someone whom Dems have lots of reasons to promote: She’s a young woman at just 39, Native American, LGBT, and obviously capable of comfortably winning a race in a red-state stronghold like Kansas. Progressives will cheer her for not backing down on impeachment when she has obvious electoral reasons to do so. If she proves she can survive supporting impeachment by getting reelected in the American heartland, she’ll be even more of a “new face of the party” than she is now. There’s probably no road for her to statewide office in Kansas (although the current governor is a Democrat) but there’s certainly a path to a leadership position in the House.

The fact that Elissa Slotkin, another freshman Dem from a reddish district, was conspicuously reluctant to commit to impeachment today makes Davids’s willingness to do so that much bolder. I bet lefties will remember.

By the way, another interesting tidbit from CNN:

House Speaker Nancy Pelosi and House Judiciary Chairman Jerry Nadler said there will be separate House votes on each article of impeachment when they go to the floor next week, even though the articles are written into a single resolution, per @jeremyherb

Is Pelosi holding separate votes on the two articles in order to give wary moderates a way to signal their wariness to swing voters? Maybe she thinks if they have a chance to vote down the second charge, obstruction of Congress, they’ll feel more comfortable going along with the big one, abuse of power in squeezing Ukraine for Biden info. She can’t be thrilled at the thought of one of the articles going down in flames on the floor, but that’s happened in the past. And she needs to do something to help make this bitter pill easier to swallow for vulnerable Democrats.

In lieu of an exit question, here are some Trump fans taking the very remote prospect of removal by the Senate with good cheer.

Trump supporters at the president's rally in Hershey, Pennsylvania tell CBS News their thoughts on impeachment and the possibility of his removal: "It would become the second Civil War." https://t.co/jPUmfWREbX pic.twitter.com/bzT0v9oaWN

The Great One, Mark Levin, Expertly Dismantles the Bolton News in a Twitter Blitz

Fireworks: Our Own Katie Pavlich Takes Chris Wallace to the Woodshed Over Trump Impeachment

Is Philadelphia’s District Attorney part of the solution or the problem?

Can’t have it both ways

Did Buttigieg tell a pro-life Democrat that the party has no room for her?

Democratic candidates “are so afraid of the abortion lobby…”