Hmmm: Murkowski dings House Dems for making impeachment process more partisan than it needed to be 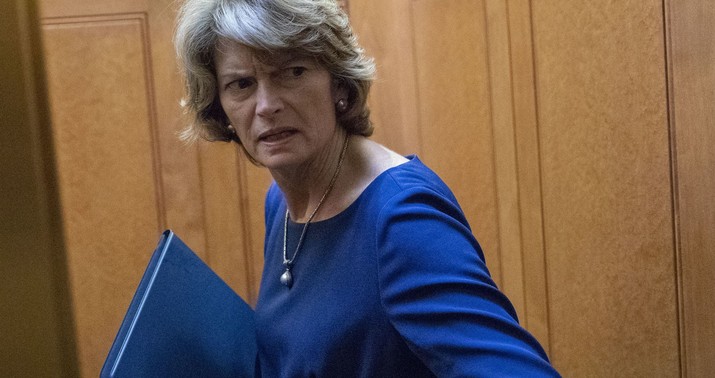 She seems to be choosing her words carefully here so let’s not presume too much about what it portends for impeachment vote.

After all, one might read this as her way of trying to cover her right flank as she gets ready to join Schumer in supporting removal. E.g., “Republicans in my home state have every right to be angry at the one-sided nature of proceedings in the House. However, the weight of the evidence” yadda yadda.

That’s now how I’m inclined to read her, though. This sounds to me like a senator who’s inclined to stick with her team on the big vote.

Sen. Lisa Murkowski said she has not been impressed with the Democratic-led process in the House.

“There has been little to no, I think, efforts to try to work with either the Republican House members on the committees, or to kind of come to some terms of rules of engagement,” she said in a telephone interview.

“And so it has made this appear even more partisan than perhaps it might have otherwise,” she said.

If she’s planning to vote for removal, she should be using this pre-trial moment to praise Democrats for how they’ve handled impeachment, not criticize them. What sort of juror would complain that the prosecution of a case was flawed — and then vote to convict?

I wonder if Murkowski, Collins, and Romney have a little deal brewing with McConnell and the Trumpier members of their caucus. This bit from a NYT story about impeachment from over the weekend caught my attention:

At a meeting with senior White House officials and senators in the Roosevelt Room of the White House almost three weeks ago, Senator Ted Cruz, Republican of Texas, made clear that there are not enough Senate votes to approve some of the edgier witnesses that Democrats and Republicans want to call. While he mentioned no names, it was interpreted by those in the room to refer to people like Hunter Biden, the son of the former vice president, whom Mr. Trump pushed Ukraine to investigate.

Whether Cruz knows that for a fact or simply assumes it is unclear, but it’s a safe assumption. Collins, Murkowski, and Romney essentially have veto power over the proceedings because the three of them can force a 50/50 deadlock on any vote. (My understanding may be wrong, but I don’t think Mike Pence gets to play tiebreaker during impeachment. And I don’t think McConnell would bring anything to the floor which he thought would produce a 50/50 stalemate.) Maybe the three of them have a bargain, whether explicit or implicit with Cocaine Mitch, that so long as the trial doesn’t turn into a circus, they’ll vote for acquittal. They want to vote for acquittal for purely political reasons, after all; even Romney and Murkowski aren’t completely insulated from normal partisan pressures in their home state. Given how stable the polling on impeachment has been and the fact that the White House has successfully bottled up firsthand witnesses to the Ukraine matter like Bolton and Mulvaney, all three have plenty of cover to vote against removal.

But their price, perhaps, is for Graham and Cruz and the rest of the Trump cheering section not to put them on the spot with tough votes on whether to call witnesses whom Trump wants to see testify but whose testimony isn’t needed to resolve the matter at hand. No Hunter Biden, no Adam Schiff, no whistleblower: The more low-key and perfunctory the trial is, I think, the more comfortable all three will be voting against removal on grounds that there’s just not enough evidence to support the political equivalent of the death penalty.

As I say, I don’t know if that bargain between the moderates and the rest of the caucus is explicit or just assumed, but McConnell obviously wants a united GOP on every vote — especially the final one, of course. If he has to make some concessions to them on which witnesses get called, even if those concessions displease Trump, I’m sure he’s happy to do it. McConnell doesn’t care a lick about ventilating Trump’s conspiracy theories about CrowdStrike or whatever. His only goal with this trial is to get through it with the least possible amount of damage inflicted on the GOP. That means no needless risk-taking in the form of unpredictable witnesses.

How Trump will react to that, who knows. His staffers will remind him that screeching on Twitter at Romney and the rest for not wanting to put Joe Biden on the stand will only alienate Romney and increase the chances of a bipartisan removal vote. But Trump’s gonna Trump. I think as long as the trial proceeds smoothly, Mitt and Murkowski will shake off any presidential insults and vote to acquit. An acquittal vote solves everything.

As for Collins, let’s be real: She’s not going to vote to remove, no matter what happens.

There was indeed a story in The Hill this weekend speculating that Collins, Murkowski, and Romney are the only three gettable votes by Democrats. But Collins isn’t gettable. Romney can potentially survive voting for removal because he’s not up for reelection until 2024 and he’s something of an icon in his ruby red home state as the first Mormon nominee for president. Murkowski can potentially survive voting for removal because she’s not up until 2022 and has proved that she can hold her seat in her own red home state even after losing a primary. Collins can’t survive a removal vote. She’s on the ballot next fall and hails from a true battleground state; voting for removal would crush her base turnout while achieving nothing since Trump’s not going to be removed regardless. Her vote for acquittal is as predictable as Lindsey Graham’s, unless she decides she doesn’t want another Senate term after all.

Still, although Collins’s vote is the safest among the three moderates, paradoxically she may have the most influence of the three over how the Senate trial proceeds. McConnell knows how vulnerable she and Cory Gardner are next fall and won’t want to do anything with respect to impeachment that takes them further out of their political comfort zones than having to vote for acquittal will. He might end up not merely bowing to their whims on witnesses, etc, but publicly crediting them for their influence: “Many in our caucus wanted to call Hunter Biden and the whistleblower but Senators Collins and Gardner made a spirited case that that would be a distraction, and ultimately they won.” Give the pro-impeachment swing voters back in Maine and Colorado something to soothe their sore feelings en route to Collins and Gardner voting against removal.