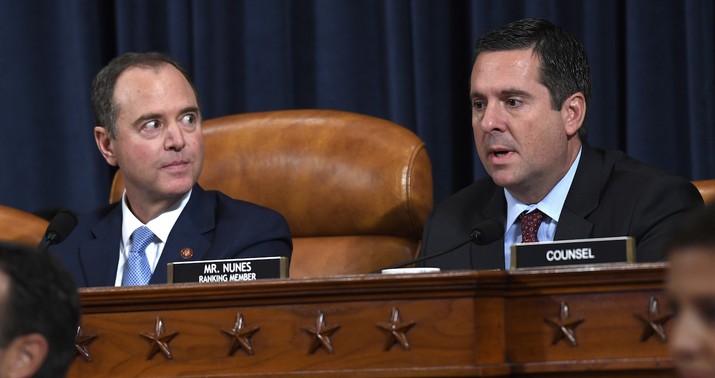 Here it is, available for download from the Oversight Committee website. The bad news is it’s 123 pages long and no one’s going to read it. The good news is that the executive summary is just four pages and no one’s going to read all of Schiff’s report either. That one has apparently been delivered to the Capitol for review by Intel Committee members as I write this but isn’t available online yet. I’ll update with a link once it is.

The arguments in the GOP executive summary are familiar by now, just as Schiff’s arguments will be. The phrase “unelected bureaucrats” pops up a bunch, e.g., “They are trying to impeach President Trump because some unelected bureaucrats chafed at an elected President’s ‘outside the beltway’ approach to diplomacy.” “Outside the beltway” is an … interesting way to describe making private attorney Rudy Giuliani the president’s key liaison to Ukraine instead of, say, Mike Pompeo or Bill Taylor, the acting U.S. ambassador to the country. That’s the heaviest lift for Republicans in the summary, trying to frame Giuliani’s strange role in all this as Trump somehow “shaking things up” in Washington or whatever instead of deputizing one of his most trusted cronies with a sensitive task like squeezing the Ukrainian government to investigate the Democratic frontrunner for president. If you were going to do something as questionable as that, you’d want a buddy in charge too instead of one of those less trustworthy “unelected bureaucrats” who might tell on you.

It’s strange that the Ukrainians would have needed Rudy as a conduit to convince Trump that they were serious about reform when Trump’s own Defense Department certified last year that Ukraine had “taken substantial actions” to reduce corruption in their defense ministry. USAID also measured improvement on corruption in its own report on Ukraine in 2018. The proof of “reform” that Trump wanted, allegedly according to Gordon Sondland, was limited to the Biden and 2016 investigations, the stuff that could benefit Trump personally. Giuliani himself has spent six months stressing that those are the particular investigations he’s interested in too. The GOP report is trying to dress him up as some deputized sheriff on Ukrainian corruption generally when in reality he was after some specific information and wasn’t shy about telling reporters.

There’s sleight of hand in this part too:

I’m excited to see the evidence that Trump just needed a little more persuading on Ukrainian anti-corruption efforts before releasing the money. That’ll come as a surprise to literally every witness who testified, most of all Sondland, who was so convinced that Trump was laser-focused on Burisma that he warned the Ukrainians in early September that their military aid depended on them announcing that the investigation would be reopened. And they nearly did announce it: Zelensky was scheduled to do so on CNN on September 13 before something mysterious happened behind the scenes — like, say, the whistleblower complaint — to jar that military aid loose. Republicans continue to strain to give Trump credit for finally handing over the aid when all available evidence points to him having done so reluctantly, only after scrutiny of his approach to Ukraine was about to erupt into a full-blown scandal.

This is a smart point by the GOP, though, one which various witnesses were forced to acknowledge:

That doesn’t directly contradict the Democrats’ narrative. It can be true, and probably is, that Trump approved previous military aid because those hawkish “unelected bureaucrats” lobbied him to do so and then held later military aid because he wanted to squeeze Zelensky on Burisma. But it’s useful to remind the public after two years of “he’s a Russian stooge!” messaging from critics that he helped arm Ukraine against Putin and obviously didn’t view the country exclusively as a means to his own ends, whatever Gordon Sondland might believe.

Meanwhile this evening, Politico is reporting that the Republican-led counterpart to Schiff’s group, the Senate Intelligence Committee, looked into claims that Ukraine meddled on Clinton’s behalf in the 2016 campaign and didn’t find enough to warrant following up on it:

But the Republican-controlled Senate Intelligence Committee thoroughly investigated that theory, according to people with direct knowledge of the inquiry, and found no evidence that Ukraine waged a top-down interference campaign akin to the Kremlin’s efforts to help Trump win in 2016.

The committee’s Republican chairman, Richard Burr of North Carolina, said in October 2017 that the panel would be examining “collusion by either campaign during the 2016 elections.”

But an interview that fall with the Democratic consultant at the heart of the accusation that Kyiv meddled, Alexandra Chalupa, was fruitless, a committee source said, and Republicans didn’t follow up or request any more witnesses related to the issue.

Committee members wouldn’t comment on the hearing because it’s classified but left-leaning independent Angus King claims he’s been to 20-30 hearings and briefings on 2016 interference in the last few years and never heard anything about Ukraine. On the contrary, U.S. intelligence has reportedly told members of Congress that the claims of Ukrainian interference are themselves disinformation pushed by Russia to cover their own tracks. But then, that’s what “unelected bureaucrats” would say.

By the way, Jerry Nadler finally coughed up his list of witnesses at Wednesday’s Judiciary Committee hearing on impeachable offenses. There are three lefty law profs plus Jonathan Turley, who’s written several op-eds recently arguing that “bribery” as Democrats are currently trying to define it wasn’t what the Founders had in mind when they wrote the Impeachment Clause. Here’s a taste to whet your appetite for Wednesday.

“it is beyond the power of an Article III court to order, design, supervise, or implement the plaintiffs’ requested remedial plan.”

“It’s so easy to be white and oblivious in this country.”

Lefty pundit: Hunter Biden’s going to have to take one for the team if calling him at trial means we get to call Bolton and Mulvaney

“Own it. Don’t sit there and try to pass the blame…”

Biden: Putin, Kim Jung-un, and Trump don’t want me to be president