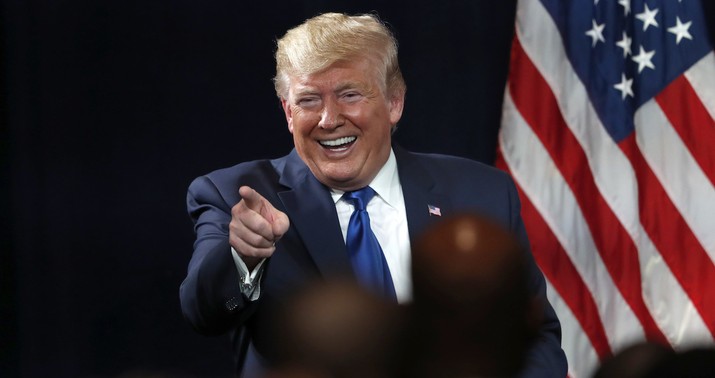 Sweet fancy Moses. Adam Schiff’s bug eyes are going to be even buggier when he sees this. New from Marquette Law’s poll of its home state:

In the new poll, 40 percent of registered voters think that Trump should be impeached and removed from office, while 53 percent do not think so and 6 percent say that they do not know.

In October, before public hearings began, 44 percent favored impeachment and removal from office, while 51 percent were opposed, and 4 percent said they didn’t know.

From net -7 on impeachment to net -13 in just a few weeks, coincidentally as the public phase of the process has begun playing out. Hoo boy. It’s not as if Trump is very popular in Wisconsin either: He’s at 47/51 in job approval, up just a single point from last month. The public appears to be darkening on impeachment, not brightening on him.

It’s not due to a single demographic either. Marquette found that both Republicans and Democrats have cooled a bit on impeachment fever. Republicans were already near rock bottom in support for removing Trump from office, of course, but Democrats went from 88/8 in favor in October to 81/11 now. Democratic leaners changed from 78/16 to 73/20. Independents are the only group that’s grown warmer towards removing Trump from office, from 33/55 last month to 36/47. If the public hearings were having a predictable partisan effect, in which each side digs in on their previously arrived at views, we shouldn’t see the Democratic numbers moving in the direction that they are. Dem numbers should be inching up on removal, not down. Some Democrats must simply be underwhelmed by the evidence.

Trump trailed each of the big three and led Buttigieg by just two points. Today? He leads Biden, Warren, and Sanders and leads much more solidly over Mayor Pete. Maaaaaybe we can attribute a bit of that to infighting among Democratic voters as the primary heats up, with some embittered Biden fans here declining to support Warren against Trump, embittered Warren fans declining to support Biden, etc.

Question: Is it possible that Wisconsinites have a different view of how impeachment’s going than the rest of the country does? It’s bad news for Dems either way, of course, since even if Wisconsin is an outlier it’s a very important outlier. The midwest will likely decide the presidency (again) in 2020. But if the national numbers are trending in favor of impeachment, that’d be some encouragement for Pelosi and Schiff. Maybe Wisconsin will catch up in time with the other 49 states, they might tell themselves.

FiveThirtyEight is tracking all polls that measure support for impeaching or impeaching and removing Trump. (Different polls offer different options to respondents.) The national trend is … not towards impeachment:

Americans are still *slightly* in favor of impeachment/removal but the margin right now is just 1.1 points. In late October it was 4.6 points. There’s really no doubt that the public has been unimpressed by what it’s seen at the public hearings so far.

One more piece of the puzzle for you from another new poll out this afternoon. Gallup finds that Trump’s job approval is back on the mend after dipping slightly last month amid the first crush of closed-door impeachment testimony:

His numbers today are precisely the same as they were in September, before the Ukraine scandal really revved up. And if you’re wondering if maybe that poll is a fluke, rest assured that it isn’t. RCP’s poll average finds Trump’s job approval at 44.0/53.8 today, slightly better than where it was on September 1 (42.7/53.8). He did take a hit last month as the drumbeat of Ukraine revelations kept going but has rebounded fully.

It’s ironic, then, that all of these solid polls for Trump are dropping on the same day that the most damaging testimony against him yet was delivered by Gordon Sondland. One of the questions Marquette asked Wisconsinites was, “Did Trump withhold aid to pressure Ukraine for investigation of political rivals?” — a question Sondland seemed to have a very clear opinion about. Just 30 percent of independents said yes; Democrats were much higher at 77 percent but there’s room for growth there too. Will Sondland’s revelations shift the public back in favor of impeachment? Next week’s polls will tell us.