He told Fox News yesterday that he’s willing to do anything he can to help calm his fans down about the Mar-a-Lago search before “terrible things” happen to the country, but I don’t know. “Calm down” isn’t the vibe I get from this post: 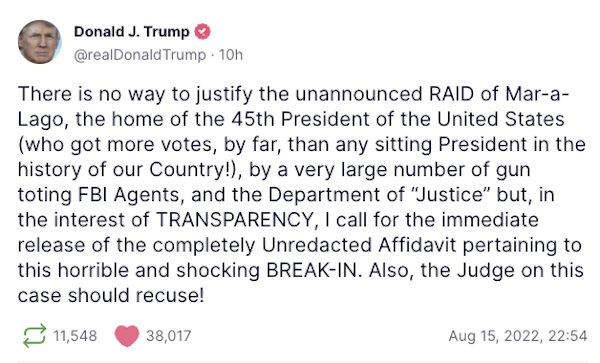 When I hear “raid,” I picture cops kicking in doors with guns drawn, screaming at people to freeze. At Mar-a-Lago, the feds were reportedly dressed in polos and khakis and didn’t carry weapons, not wanting to make the incident more politically inflammatory than it needed to be. And they carried out the search while he was out of town, sparing him the embarrassment of having federal agents roaming his property while he was on the premises.

So why is he misrepresenting what happened in the most sensational way possible? You would think a guy who’s supposedly so concerned about keeping the peace wouldn’t be screeching to his fans about “gun-toting” agents “raiding” his property.

Why, it makes one wonder if he’s sincere about wanting to calm things down after all.

His strategy here, as always, is to cast as much suspicion as possible on his antagonists and their motives even when they’re following standard procedure. No doubt millions of people who’ve never seen a search warrant and have no concept of what they entail will read the post above and find it deeply irregular that the target of the search wasn’t given a copy of the FBI affidavit supporting it. In reality, it’s the opposite of irregular. The target never gets to see the affidavit. Former federal prosecutor Ken White:

It would be extraordinary to unseal the search warrant affidavit in an ongoing investigation. It's theoretically possible but I don't think I've ever seen it happen. The notion that it's unusual or sinister for DoJ to oppose it is a lie.https://t.co/CNmMfyNkJI

The target gets a copy of the warrant along with an inventory of items that were taken during the search. They don’t get a copy of the supporting affidavit for obvious reasons, because it contains information identifying the sources and other evidence that gave the feds probable cause to believe that a crime had been committed. In the unlikely event that Trump is indicted, they’ll be forced to reveal those sources and that evidence at that time. But for now, as the DOJ noted in its filing yesterday, “Disclosure of the government’s affidavit at this stage would … likely chill future cooperation by witnesses whose assistance may be sought as this investigation progresses.” With the case still open, it’d be nutty for them to show their hand.

That’s another reason Trump wants to see the affidavit. It’s not just about misleading his fans into believing that the secrecy of the document is irregular. He wants to know who ratted him out so that that person’s life can be made a living hell, as always happens when someone causes him trouble. It’s the same reason there was an obsession among MAGA fans to identify the whistleblower in the Ukraine matter in 2019 that led to Trump’s first impeachment. The rats must be exposed, their foul “deep state” motives revealed, and their sense of personal security shattered as punishment for inconveniencing the leader. Same goes for any FBI agents connected to the investigation whose names might turn up in the affidavit. And the same, of course, goes for the magistrate judge who signed the warrant and who’s already been doxxed and threatened ad nauseam on Trump’s Truth Social platform.

A review of Truth Social postings by Rolling Stone shows Trump supporters have spent the past week doxxing both Judge Bruce Reinhart, the magistrate judge who approved the Mar-a-Lago warrant, and an FBI agent involved in preparing the request, as well as their families. The information includes their purported home addresses, phone numbers, places of worship, private offices, and similar information about the men’s families and junior employees…

When a federal court unsealed the search warrant, the court redacted the names of FBI agents involved. But the names became public when the pro-Trump outlet Breitbart obtained a leaked copy of the warrant and posted an article highlighting the agents’ names. In a move that added fuel to the MAGA doxxing push, Truth Social subsequently issued a push notification to its users that linked out to a third-party news article listing the agents’ names, according to CNN’s Donie O’Sullivan…

Another user asked for help to “verify” that the address of a local temple Reinhart attended was correct. (Reinhart’s synagogue has had to cancel services following an outpouring of antisemitic abuse, according to Business Insider.)

“There is no MAGA movement without threats and violence,” David French wrote recently, a lesson one would think would be obvious to all after thousands of his fans rioted at the Capitol to try to keep him in power. But according to Rolling Stone, even Trump himself remains in a degree of denial about it. He’s reportedly skeptical that the prolific Truth Social poster who tried to breach the FBI’s office in Cincinnati last week and then ended up dead in a shootout was who he claimed to be, never mind that incandescent rage about the FBI search has been par for the course among MAGA fans online for the past week. “[T]he former president has also left the door ajar to alternative explanations or conspiracy theories [about Cincinnati], telling some of those close to him that it might be possible that the shooter was a ‘psycho’ who didn’t even like Trump and wanted to make MAGA supporters look bad,” RS claims.

So on the one hand, he’s warning people publicly that “terrible things” will happen if he’s prosecuted. On the other, he seems willing to believe that the Cincinnati incident was Antifa or whatever. We went through this same phenomenon of illogic after the insurrection. Only the terrorist left would try to hang Mike Pence — but if they had hanged him, he would have deserved it for betraying Trump.

The last reason Trump wants to focus on the affidavit is because it distracts from the underlying issue, whether he really did have top secret documents at Mar-a-Lago which he had no right to possess. I’m willing to believe that that was the screw-up of some underling/fall guy like Mark Meadows who was in a rush in the final days of Trump’s term to pack up the White House and did a sloppy job of it. But that wouldn’t explain Trump’s persistent refusal to return all of the documents when asked, even after the feds had subpoenaed them. A mystery about what’s in the secret search warrant affidavit is much better for him politically than a mystery about why he held onto top-secret classified material long after he’d been alerted to the fact that it was in his storage room.

Anyway, the DOJ is resisting his effort to unseal the affidavit. The hearing is Thursday.

Trump is very, very likely to lose on that matter for all of the foregoing reasons. Do you suppose he’ll react by pleading for calm and urging his fans to withhold judgment until it’s clear whether the department intends to charge him or not? Or will he accuse the judge of being biased, the feds of planting evidence, and then tweet 50 times about a “witch hunt”? Stay tuned.