A midterm bellwether from Washington state: Has the red wave receded?

What better way to celebrate bedwetting season than by overinterpreting a single state’s primary results to predict gloomy national trends?

And yes, for the record, the national trends lately have been gloomy: 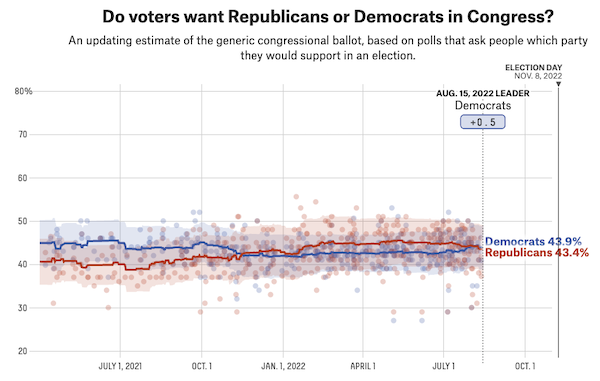 RCP’s generic ballot average still has the GOP ahead, but by the smallest possible margin.

Let’s talk Washington. What is there to be learned about national performance from one of the most reliably blue states in the union? A lot, says Sean Trende, who’s been studying Democratic primaries there for more than a decade as bellwethers of how well or poorly Dems will do nationally in the fall. Washington is unusual in that it uses a “jungle primary” system, where all candidates from both parties appear on the same ballot and the top two finishers advance to the general election in November. It’s also unusual in that it holds its primaries late in the campaign, in August, which makes them a bit more useful to projecting the national mood in November than, say, a primary held in April might be.

It turns out that the total share of the vote received by all Democratic candidates in the jungle primary predicts pretty well the total share of the vote that’ll go to the top Democratic candidate on the ballot in Washington state in the fall. In fact, per Politico, Dems have tended to overperform a bit in November in recent elections relative to their primary vote. The numbers: 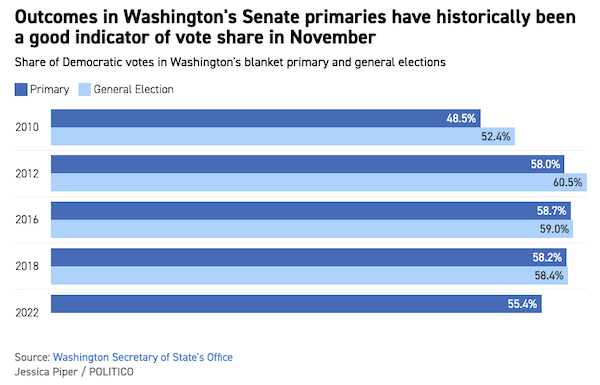 A few months ago, pre-Dobbs, when the GOP seemed poised for a red tidal wave this fall, Republicans toyed with the idea of making a play for Patty Murray’s Senate seat in Washington. Based on the above results, that would be foolish. If Dems in the state are combining for 55.4 percent of the vote in the primary, we’d expect Murray to do slightly better than that in November, not worse, making the race a lost cause for the right. Their money is better spent on more competitive races, especially with groups like the NRSC experiencing a bit of a cash crunch.

Trende’s analysis is more involved than Politico’s and is worth reading in full, although both come to the same conclusion — the results in Washington point to a reasonably good year for the GOP this fall but not to a tidal wave. “This year, the aggregate Democratic vote across the state’s House primaries was more than 5 percentage points worse than Democrats’ performance in the 2018 ‘blue wave’ year,” Politico notes. “But it was also more than 5 percentage points better than Democrats performed in either 2010 or 2014, two Republican wave years.” The 55.4 percent share of the vote that Dems got in the recent primaries was several points less than Joe Biden’s share of the vote in Washington in 2020, an encouraging sign for the GOP, but it wasn’t starkly less like it was during Barack Obama’s two midterm elections. One Republican analyst said that points to something closer to a “neutral” midterm environment in November than a red wave.

Trende’s take on the national outlook based on Washington’s results:

The model suggests that [Washington] Democrats should run, on average, about 3.8% behind Joe Biden’s vote share from 2020. That would reflect one of the larger expected midterm drop-offs in our dataset, akin to 2014 and 1994, but not what we saw in 2010. (Notably, though, Barack Obama won in 2008 by a larger margin that Biden won in 2020 or Clinton won in 1992.) We should also remember that error margins are real, and that although the model performs well, it is still imperfect.

How you feel about that depends on whether you view the glass as half full of half empty. Half full: It remains very likely that Republicans will flip the House, thanks in part to the surprising gains they made in the 2020 election. Dems have a bare majority in the chamber right now; if Trende’s right about them losing the national popular vote in House races this fall, it’s a cinch that at least a handful of competitive blue seats will turn red. And if they do, that means Joe Biden’s legislative agenda is dead for the final two years of his first term. Nothing will pass a Kevin-McCarthy-run House.

Half empty: Despite the worst inflation in 40 years, Republican control of the Senate remains in doubt. Poor candidate selection plus a “Roe effect” plus declining gas prices means there may be just enough votes left on the table for Democrats to squeak through in states like Georgia, Arizona, and Pennsylvania. And if they do, that means the power to confirm any new Biden nominees in 2023 and 2024 will remain in Democratic hands. If John Roberts surprises everyone by declaring that he’s had enough of the Supreme Court, Dems are assured a solidly liberal replacement as chief justice.

All in all: Could be worse, could be better, as is usually the case in life. But if Republicans prove unable to flip a 50/50 Senate in a cycle where the incumbent president is polling at 40 percent and inflation is rampant, they’ll spend the next decade kicking themselves for it. And they should.

Exit question: Is “defund the FBI” a smart midterm message for the GOP? A key reason Republicans did better than expected in 2020 is because progressives spent months demanding that America defund the police, sending frightened working-class voters fleeing into the GOP’s camp. Now here’s MAGA demanding that federal law enforcement be abolished, at least temporarily, because they’re mad that the feds insisted on retrieving classified documents from Trump which he had no right to take. “I’m impressed Democrats finally got us to say, ‘Defund the FBI,'” Dan Crenshaw told Axios recently. “That makes you look unserious, when you start talking like that.”