Yeah, not to sure what to say about this new one from Pew. This is more of a “gawk and shake your head” result than one requiring analysis. 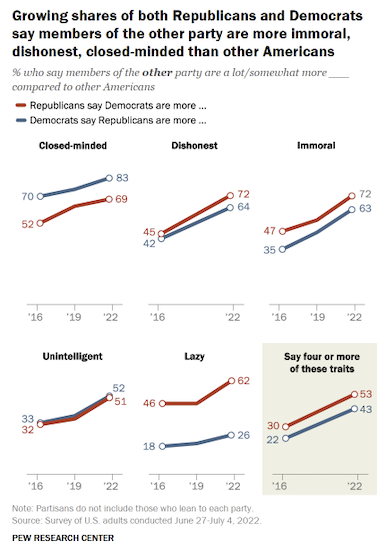 Most of those numbers are explicable as byproducts of general partisan hatred. Ask a Republican if Democrats evince a certain negative trait, or vice versa, and many will say yes reflexively. That’s why, I assume, the trends in both parties track so closely over the past six years. It’s not that righties and lefties have calmly deliberated about whether the other side is unintelligent, for instance; it’s that more righties and lefties feel broad contempt for the other side for other reasons and thus will agree with any pejorative you offer.

I’m confused about the laziness result, though, which *doesn’t* track. Why the sharp spike among Republicans in believing that Democrats are lazy circa 2019? All I can think is that it’s some sort of backlash to liberal COVID hawks insisting on working from home during the pandemic. Usually “lazy” is a political euphemism for “freeloader” or “welfare queen” but I don’t see how that could be the context given the timeline here.

Polarization around Trump is an obvious contributing factor to bitterness between the parties, as the last 24 hours have reminded us, but you can’t lay all of these trends off on him. Expand the time horizon and you’ll find that partisan animosity was trending upwards long before he entered politics. 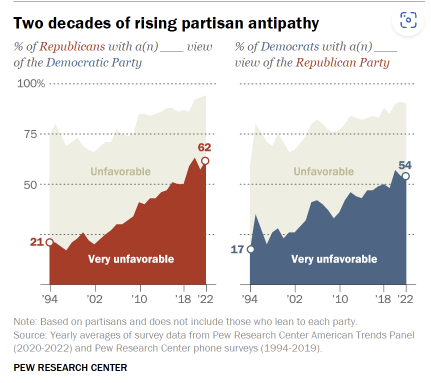 Both parties held steady under or around 25 percent from 1994 through 2002 or so, a remarkable display of restraint given what the country endured in the 2000 election. America today would be an utter madhouse if a presidential contest came down to a few hundred votes in Florida. It looks like the Bush/Gore outcome *did* push partisan animosity a bit higher before 9/11 sent it trending downward again — briefly, before polarization around the Iraq war in 2003 set us on a path of no return. It’s been onward and upward ever since, with Republicans following an essentially straight line and Democrats seeing a few more peaks (Iraq, Katrina) and troughs (Obama’s election). The GOP numbers do balloon a bit circa 2018-19 for reasons that are unclear to me. Was it Trump’s first impeachment that did it? The Kavanaugh saga?

Either way, our current unraveling isn’t all on Trump. He’s the accelerant on the fire but the match was lit by a combination of divisive major policy decisions and, I think, the rise of partisan media that allowed true believers on both sides to sequester themselves in information vaults that no unhappy facts could breach. Of course Republicans or Democrats are demonic if you’re gorging on propaganda all day long.

There is one clear “Trump effect” in Pew’s data on how the parties have evolved, though. A striking divergence since 2016: 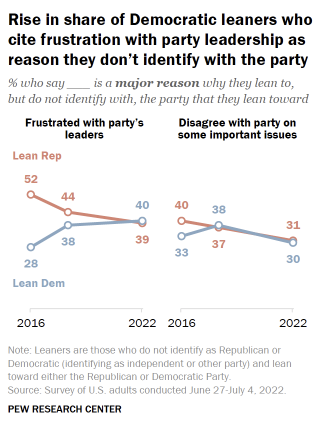 David Byler argued last week that one of the reasons Trump has lost ground in 2024 GOP primary polling is because he isn’t as singular a figure now as he was in 2016. He’s inimitable in many ways, but not on policy. “Heading into a possible third run for the White House, Trump is a victim of his own success: By rehabilitating the GOP in the eyes of its voters, he deprived himself of a useful antagonist,” Byler wrote. We’re seeing that rehabilitation in Pew’s graph, as the share of Republicans who were frustrated with party leadership in 2016 has shrunk by 13 points while the share of Dems frustrated with their own leadership has risen by 12 over the same period

That’s probably a bit more complicated than “Republican voters prefer Trump’s policies to Paul Ryan’s.” For instance, some centrist GOPers have disaffiliated from the party in protest of Trump, leaving the remaining party Trumpier and more loyal. The dynamics of personality cultism around Trump may also obscure or suppress misgivings that the base has about some of his policies. But by and large, I think Byler is right that Trump’s emergence has aligned the leadership more closely with the preferences of the base, for good or ill (mostly ill). It’s Democrats, not the post-tea-party GOP, who are more frustrated with their leaders, suggesting that the rift between progressives and centrists is more of a long-term threat to Team Blue than any rift on the right over Trump and MAGA is to the GOP.

Although the right-hand graph in the above image makes me question that. If there were a major ideological rift on the left, we wouldn’t expect them to have the same share of voters who disagree with the party on some important issues as Republicans have, right? We’d expect that share to be bigger. Maybe Democratic frustrations with leadership are less about ideological differences than about party leaders failing to enact policies that are broadly popular among liberals of all stripes. That’s a major asymmetrical advantage that the GOP enjoys over the opposition: Democrats have an honest-to-goodness policy agenda — an ambitious one — whereas the GOP has little more than Trump autocracy anymore. It’s easy for Republican leaders to deliver on that promise relative to Dems having to pass single-payer health care, say.

Anyway, we’re never coming back from all of this. Grim.

Lizzo borrowed a priceless crystal flute that belonged to James Madison from Library of Congress
Karen Townsend 8:41 PM on September 28, 2022