Oh? And what leads you to believe that, congresswoman?

Carolyn Maloney isn’t some freshman yutz babbling ineffectually. She’s been in Congress for 30 years and currently heads the House Oversight Committee. Has she … heard something through the grapevine? Maybe a presidential announcement that’s being kept under wraps for now but will shortly be revealed after the midterms?

Jerry Nadler: "Too early to say.."

Jerry Nadler wouldn’t give a straight answer either when asked. You know Biden’s political position is bad when two longtime Democrats, during a Democratic House debate, in a city as Democratic as New York, won’t utter an emphatic “yes” when asked whether our Democratic president will seek a second term.

How many Democrats lately have declined to clearly endorse Biden for reelection? Let’s count. There’s Maloney and Nadler. There’s Joe Manchin. There’s Minnesota Rep. Dean Phillips. And as of yesterday Phillips’s colleague from Minnesota, Angie Craig, is on board:

“I think the country would be well-served by a new generation of compelling, well-prepared, dynamic Democrats who step up,” Phillips said.

Craig said it was Biden’s decision whether or not to run. But when asked if she would support Biden if he did run, Craig said: “I would say we need new leaders in Washington up and down the ballot in the Democratic Party.”

Literally everyone agrees. But there are no obvious “new leaders” in the party who might plausibly overperform Biden in 2024, which is what makes these votes of no confidence from his own congressional caucus so astonishing. They’re not trying to push him out because there’s a young political dynamo a la Obama waiting in the wings to build a winning new coalition. They’re trying to push him out despite the fact that there’s no obvious successor, purely on “C’mon, we’re not going to renominate this bag of bones, are we?” grounds.

What I’m trying to say is that the “Let’s go, Brandon” segment of the population now appears to include several Democratic members of Congress.

Which is ironic, given the timing. Don’t look now but “Brandon” has picked up a few points lately in the RCP job approval average and is on the verge of crossing the political Mendoza line of 40 percent for the first time since late June. Huh: 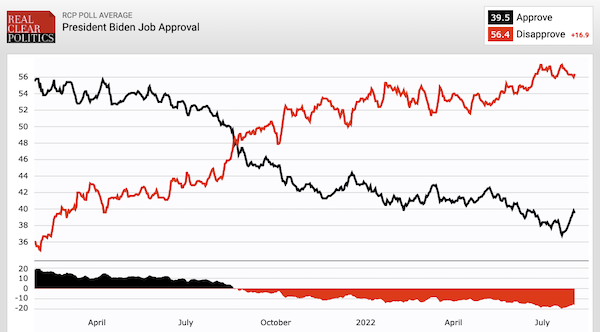 From an atrocious 36.8 percent on July 21 — a worse number than Trump ever saw, even after the insurrection — to a still smelly but less overpowering 39.5 percent just 13 days later. How did Biden do it?

More than half of all gas stations across the United States now offer gas for less than $4 a gallon.

Gas is down 70 cents a gallon on average from a month ago, mirroring Biden’s own polling surge by shifting from appalling numbers ($4.81 per gallon) to the merely terrible ($4.16). The White House will doubtless try to take credit, perhaps by claiming that Biden’s fist bump with a psychopath a few weeks ago paid off after all. Don’t believe them if they do.

Sen. Joe Manchin D-WV announces he will support the revised reconciliation bill from Democrats. "Build Back Better is dead," Manchin says in a statement, saying the new name of the bill is the "Inflation Reduction Act of 2022."https://t.co/ffUVJmkkbj pic.twitter.com/qHYJH4wv5G

Biden’s numbers were already moving up by the time Joe Manchin and Chuck Schumer announced that Build Back Better was back from the dead on July 27. But the news probably softened some feelings towards the president among progressives who felt he failed to deliver on some of the big promises he made them during the 2020 campaign. $369 billion in new spending to fight climate change was destined to be worth a point or two in job approval by bringing members of the disgruntled left back into the fold.

In fact, the GOP’s lead on the generic ballot is down to … 0.3 percent at RCP today. I know it’s officially “bedwetting season,” when bored political junkies speculate that the underdog party might do better in the fall than expected before they eventually go on to get wiped out. But I’ve gotta say, I did not expect to see Dems this close in polling at any point this summer or fall. I thought inflation would create a dependable two-point cushion for the GOP. 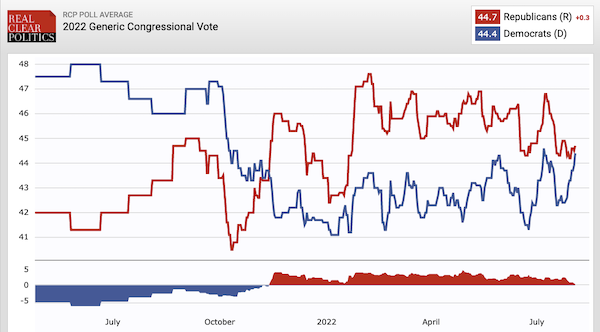 In late June, Monmouth found Republicans up two points on the generic ballot. This week they have Democrats up three. InsiderAdvantage saw the GOP leading by eight a month ago. Today the lead is one. Maybe there’s a “Roe effect” driving this, plus gas prices, plus the Manchin bill, but I wouldn’t have guessed that the margin on the generic ballot would be shrinking a week after news about a new recession broke. Hmmmm.

Joe Biden Proves Once Again Why He Isn't Fit to be President
Townhall
CBS reports breaking news about the Dems' 'Inflation Reduction Act' (Shocker: 'They waited to report this until after it passed')
Twitchy
Report: Surprising Private Message Trump Sent to Merrick Garland After Mar-a-Lago Raid Revealed
Redstate
Yes, They're Going to Arrest Donald Trump. Deal With It.
PJ Media