Radicalization: 82% of Dems now say abortion should be legal in all or most cases, up almost 20 points since 2007

An eye-popping trend from Pew, destined to spark a new argument between pro-lifers and pro-choicers about cause and effect.

That is, are lefties radicalizing in defense of abortion rights because righties are becoming more radical in trying to restrict those rights, as with “heartbeat laws”?

Or have righties become more radical in trying to restrict abortion rights because lefty politicians keep growing more absolutist about abortion on demand, even in the third trimester? 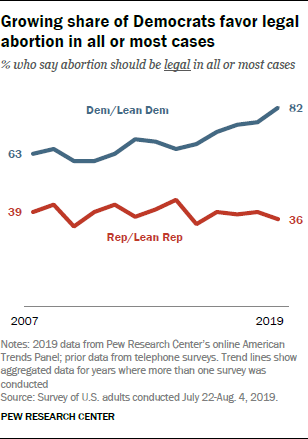 Pro-choicers will point to the recent upswing in that trend line and lay it at Trump’s feet. How can you blame us for becoming more extreme, they’ll say, when we have a president who may have just assembled a five-vote Supreme Court majority for overturning Roe? It’s only natural that one side’s gains in the abortion war will ignite a backlash in the opposing side. Case in point: This same poll shows opposition to overturning Roe surging to 69 percent in December 2016, a month after Trump’s election, despite barely budging between 2003 (62 percent) and 2013 (63 percent). The out-party inevitably adopts a siege mentality.

And yet … the same phenomenon doesn’t seem to have happened with Republicans during the Obama era. There were minor fluctuations here and there but the share of GOPers who think abortion should be legal in all or most cases is about the same as it was at the end of Dubya’s presidency. So maybe there’s more to the Democratic shift than some quasi-organic partisan backlash cycle.

Another question shows a further asymmetry between the parties. Although conservative Republicans are solidly pro-life, moderate Republicans are actually fairly firmly pro-choice. The GOP skews right overall on abortion because conservatives outnumber moderates but there’s a genuine division within the party. There’s no similar division among Democratic factions: 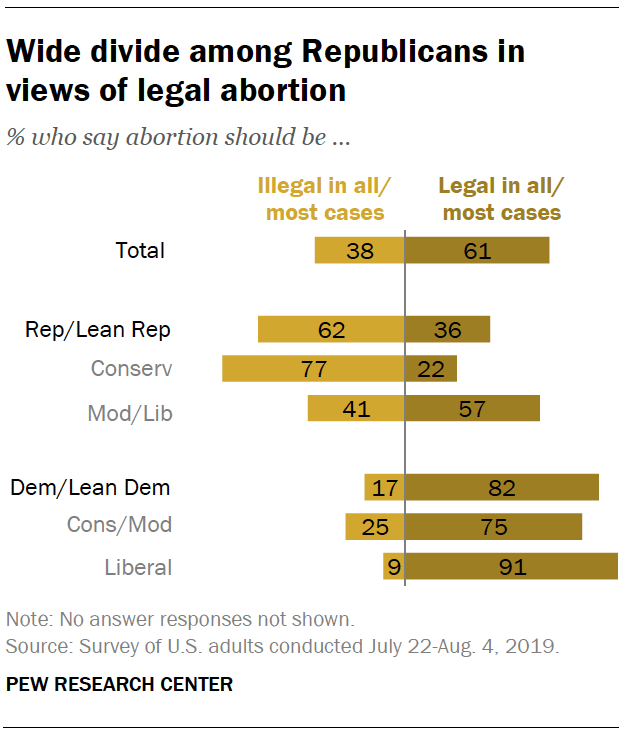 A different question shows that no less than 70 percent of moderate Republicans oppose overturning Roe versus 61 percent of conservatives who support overturning it. Combine Republican ambivalence about abortion with Democratic unanimity in favor and we’ve reached a modern high in the number of Americans overall who think abortion should be legal in all or most cases — 61 percent.

Imagine what the “siege mentality” numbers will look like if Trump ends up replacing Ginsburg or Breyer on the Court after all. In lieu of an exit question, here’s a choice bit from Dave Chappelle’s new stand-up special on Netflix that veers from pro-life to extremely pro-choice back to pro-life again in less than two minutes. Lots of profanity so take care if you’re listening at work or around the little ones.

“If you can kill this motherfucker, then I can at least abandon ‘em. It’s my money, my choice. And if I’m wrong, then perhaps we’re wrong.”

This is… pretty dark & subversive.pic.twitter.com/546lOZT4Zg

This book excerpt about a new approach to treating psychosis is interesting and worrisome
John Sexton May 18, 2022 1:00 PM ET