What did Alex Acosta mean when he allegedly said that Epstein "belonged to intelligence"?

The word “allegedly” can’t be stressed enough here. But the Daily Beast is a credible publication and reporter Vicky Ward has been on the Epstein beat for a long time:

Epstein’s name, I was told, had been raised by the Trump transition team when Alexander Acosta, the former U.S. attorney in Miami who’d infamously cut Epstein a non-prosecution plea deal back in 2007, was being interviewed for the job of labor secretary. The plea deal put a hard stop to a separate federal investigation of alleged sex crimes with minors and trafficking.

“Is the Epstein case going to cause a problem [for confirmation hearings]?” Acosta had been asked. Acosta had explained, breezily, apparently, that back in the day he’d had just one meeting on the Epstein case. He’d cut the non-prosecution deal with one of Epstein’s attorneys because he had “been told” to back off, that Epstein was above his pay grade. “I was told Epstein ‘belonged to intelligence’ and to leave it alone,” he told his interviewers in the Trump transition, who evidently thought that was a sufficient answer and went ahead and hired Acosta. (The Labor Department had no comment when asked about this.)

That smells suspiciously like a BS excuse concocted by Acosta to explain away his horrid sweetheart plea deal for Epstein and preserve his chances of becoming Trump’s pick at Labor. “I wanted to prosecute him but I couldn’t. The Men In Black needed him! Very hush-hush!”

And yet the fact remains that Epstein’s life is suffused with an unusual degree of mystery for someone so well known for so long to so many famous people, including two U.S. presidents. And I don’t mean mystery in terms of how he spent his spare time; I mean mystery in terms of how he spent his time professionally. As noted yesterday, despite Epstein’s own fame as a wealthy investor, no one seems to know exactly how he made his money. Apart from one person, his client list has been a secret for decades. How he insinuated himself into the company of the likes of Bill Clinton and Donald Trump remains unclear, unless they invested confidentially with him.

New York magazine flags four separate theories today of how Epstein might have made his millions. One is that he really does have investment clients but was running a Madoff-style Ponzi scheme, although that raises a question of how he kept the scheme going during his short stint in prison. Another possibility is money laundering, but there’s no hard evidence of that. A third is the “intelligence asset” theory hinted at by the Daily Beast, although Epstein seems to be verrrrrry rich. How much would an intelligence bureau be willing to pay an asset?

The fourth theory, which seems more plausible, is extortion:

And in a 2015 court filing, alleged Epstein victim Virginia Roberts Giuffre claims that U.S. authorities were in possession of footage of her having sex with members of Epstein’s elite friend group. “Based on my knowledge of Epstein and his organization, as well as discussions with the FBI, it is my belief that federal prosecutors likely possess videotapes and photographic images of me as an underage girl having sex with Epstein and some of his powerful friends,” she said. Giuffre claimed that Epstein “debriefed her” after she was forced into sexual encounters so that he could possess “intimate and potentially embarrassing information” to blackmail friends into parking their money with him.

If it’s true that Epstein was pimping out underaged girls to fabulously wealthy men and had documentary evidence of it, there’s no limit to how much money he might have made off of them. Remember, Bill O’Reilly allegedly paid more than $30 million to settle a sexual harassment claim by an adult colleague at Fox News. Epstein’s “business” might have involved people an order of magnitude richer than that who were facing consequences much more severe than a sexual harassment suit if their behavior with minors was found out. He could have named his price theoretically from some of them. And that feeds into the “intelligence asset” theory: If Epstein had life-destroying evidence against powerful men abroad, obviously that would be of use potentially to U.S. intelligence. It might also explain how Epstein managed to avoid being killed by any of these powerful blackmailed men. Maybe he was being protected somehow by people with the means to provide protection. Or maybe he let it be known to his blackmail targets that he’d already shared the evidence with U.S. intel and any attempt to harm him would result in them using it.

Or, since we’re speculating wildly here, maybe Epstein wasn’t allied with any particular intel bureau. What if he was an “arms dealer” of sorts, except instead of weapons he was selling nuclear-grade blackmail material to whichever foreign intel bureau wanted it on a particular target? He could make a lot of money that way.

But there’s an obvious question. If all of that (or any of that) is true, how could the feds risk prosecuting him now? The revelation that the U.S. government allowed a child predator to operate with impunity in the name of entrapping its enemies sexually would be a scandal to end all scandals. The feds’ fear that Epstein would reveal all would be so enormous that they wouldn’t dare touch him. To put it another way, if Acosta was telling the truth about Epstein belonging to intelligence, what’s changed since Acosta was U.S. Attorney to make the feds feel that (a) it’s safe to charge Epstein now and (b) he won’t implicate them in his crimes?

Speaking of blackmail, a juicy bit from Vanity Fair about Trump’s relationship with Epstein. There’s no evidence that Trump ever visited Epstein’s notorious private island, notes VF, but there’s circumstantial evidence that he knew Epstein was up to no good:

In the week or so leading up to his CPAC speech, David Pecker, who owned the Enquirer until it was sold in ruin earlier this year, visited Trump on the 26th floor of Trump Tower, bringing along an issue with a Prince Andrew and Epstein-related cover, according to people familiar with the meeting. Pecker, of course, was in the business of protecting Trump…

After the meeting Trump called in Sam Nunberg, then a Trump Organization employee, who saw Pecker leaving Trump’s office. “Michael [Cohen] was sitting in there when I came in, and the issue of the National Enquirer with the pictures of Prince Andrew was on his desk,” Nunberg recalled. “He said not to tell anyone, but that Pecker had just been there and had brought the issue with him. Trump said that Pecker had told him that the pictures of Clinton that Epstein had from his island were worse.”

Cohen told VF in a phone call from prison that Nunberg is telling the truth. Trump has hinted publicly at times in the past about Epstein’s preference for “younger” women, saying in 2002 of Epstein that “he likes beautiful women as much as I do, and many of them are on the younger side.” Years later, Roger Stone recalled Trump telling him about once visiting Epstein at his home in Palm Beach: “The swimming pool was filled with beautiful young girls. ‘How nice,’ I thought, ‘he let the neighborhood kids use his pool.’” Maybe all Trump meant by “younger women” is twentysomethings, but that reference to the neighborhood kids is ominous.

What did Trump know about what Epstein was doing? Yesterday author James Patterson claimed on Fox News that Trump and Epstein had a falling out related to Epstein misbehaving at Mar-a-Lago, with Trump banning him from the club. The Times’s sources claim the falling out was related to a “failed business arrangement” between the two, although, errrrr, again, no one knows exactly what Epstein’s “business” is. I’m skeptical that Trump will be implicated in Epstein’s crimes but it’s not crazy to wonder if the man to whom the DOJ now reports had a basic idea of the crimes Epstein was committing long before the DOJ itself did. And if he did, why didn’t he say anything? This isn’t a buddy carrying on an affair surreptitiously. This is something much darker.

Acosta’s going to speak to the media this afternoon to try to keep his job. Mick Mulvaney reportedly wants him gone, although that may have less to do with Acosta’s mishandling of the Epstein matter than with him not being as aggressive on deregulation as Mulvaney would like. Here’s Ann Coulter on the radio yesterday doing a little speculating of her own about Epstein. Exit question: Why’d Epstein ship himself a nearly 200-pound tile and carpet extractor a few months ago, after the feds started showing interest in him again? 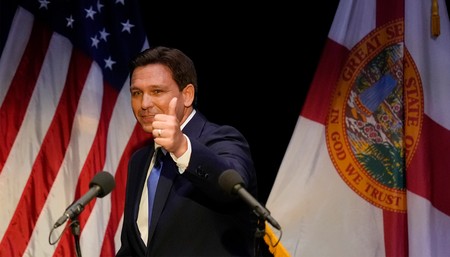