It turns out that Atlanta wasn’t the only place where fisticuffs, foul language, and mayhem broke out this weekend.

The son of the Rep. Katherine Clark, the second ranking Democrat in the House, was arrested last night for assaulting a police officer during an Antifa event in Boston.https://t.co/C3qkoRSCl3

You probably didn’t hear a peep about this one though, considering who was involved. I went looking for local news reports Sunday and they were few and far between, even on the Boston TV stations. Just a note about an officer being hurt, and the names of the arrestees – nothing about what led up to the incident, how long it lasted, why this little mob was out there, nothing.

A Boston police officer was injured after being assaulted while responding to a protest at the Parkman Bandstand late Saturday night that resulted in two arrested.

Officers responding to the Parkman Bandstand around 9:30 p.m. found an individual defacing the monument with spray paint. The tagging read “NO COP CITY” and “ACAB.” The suspect was later identified as Jared Dowell, 23, of Melrose, according to Boston police.

During the arrest, about 20 protesters gathered around the officers while screaming profanities through megaphones, causing traffic to come to a standstill, police said. One officer was “hit in the face and could be seen bleeding from the nose and mouth.”

Dowell was arrested on charges of assault by means of a dangerous weapon, destruction of personal property, and damage of property by graffiti/tagging. Dowell is expected to be arraigned in Boston Municipal Court.

The news report came almost verbatim from the Boston PD release. Interestingly enough, you’ll notice there’s not a single pronoun used in the description of Dowell’s actions or his arrest. Not one. They use “the suspect” or his name, over and over. This contrasts with the other person arrested later in the evening.

I wonder why that is. Did Jared make the officers aware of who his mummy was? Or his sex? I guess Saturday night’s alright for fighting, especially if you’re the treasured spawn of the House minority whip.

Ah. Gender, not sex – how clumsy of me. I found the answer to that confusing son Jared/daughter whut now that more media outlets have picked this story up.

The daughter of House Minority Whip Katherine Clark was busted for allegedly spraying anti-cop graffiti and assaulting a police officer in Boston.

Riley Dowell, 23, was caught spray-painting “NO COP CITY” and “ACAB” — an acronym for “All cops are bastards” — on the Parkman Bandstand Monument in Boston Common during a protest Saturday, according to police.

Dowell — who is non-binary and was identified as “Jared Dowell” by police — was being detained for vandalism when “a group of about 20 protesters began to surround” the arresting officers. 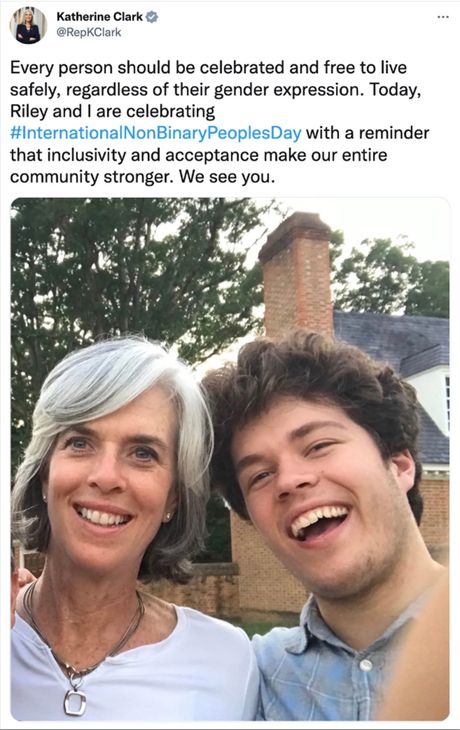 Obviously, there hasn’t been an official name change, so were the police being cautious? Or just doing their jobs with the facts at hand, like going by what was on his driver’s license/ID? So insensitive, if you can imagine that.

This is the same woman who spoke movingly about how nightmares about climate change would wake her children from their sleep.

This is the same woman who says the justice system is permeated with racism, perpetuating systemic inequities – until she needs it and WT frick are “COVID HATE CRIMES“? Anybody? 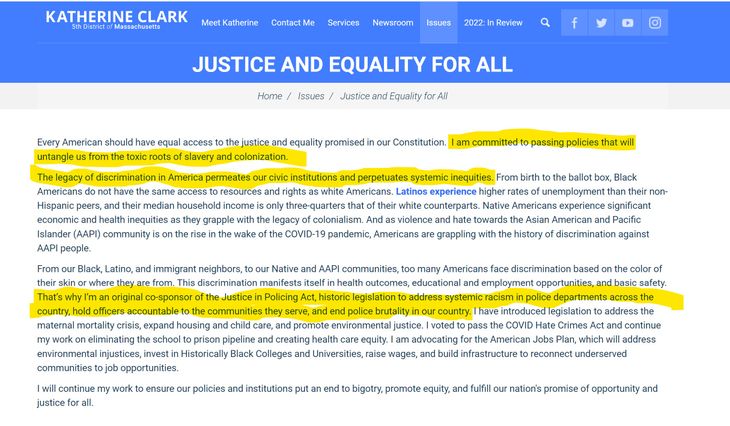 This is the same woman who can’t – and/or won’t – condemn Antifa violence because she raised it. She has her very own gender fluid white domestic terrorist.

Ah, the “cycle of joy and pain in parenting.” I can’t believe she knows much about parenting by the evidence available so far. Then again, I identify as a cynic.

But, man oh, MAN. What a Democratic poster girl! She has every last whack job box checked, does she not? Just one last thing to show you how COMPLETELY Clark has nailed every single hypocritical uber-Leftist taking point.

Climate change nightmares? Oh, yeah, baby. I can hear the waves washing in my sleep.

In December Katherine Clark said in an interview that her Antifa nonbinary son wakes up in the middle of the night with nightmares about climate change. So naturally then she purchased a $1.3 million ocean front property in Revere. pic.twitter.com/hOmW7g0I3g

By George, she should have been Minority Leader.

The only thing we’re missing now is the appeal for privacy for “healing” and “family.” You know it’s coming.

Thank goodness they have a beachfront retreat for solitude.

Does importing gas and diesel made from Russian oil make New Yorkers "tools of Putin"?
Beege Welborn 6:01 PM on February 02, 2023

Kevin McCarthy Goes Scorched Earth After Dems Protest Ilhan Omar's Committee Removal
Townhall
How would you feel if you saw this woman open-carrying at the grocery store?
Twitchy
Disgraced Liar Dan Rather Takes Race-Baiting Cheap Shot at DeSantis, Gets Exactly What He Deserves in Return
Redstate
Was It Personal? Authorities Investigating Rumor That Tyre Nichols Was in a Relationship With Officer's Ex
PJ Media